If all goes as planned, Sarasota County staff will break ground in early summer on the first segment of the North Extension of The Legacy Trail.

That news was part of a presentation that Nicole Rissler, director of the county’s Parks, Recreation and Natural Resources Department, provided about 35 people during the Feb 18 meeting of the Siesta Key Condominium Council.

“And then we will race to completion, hopefully in 2022,” Rissler added of the timeline for the three sections of the extension from Culverhouse Nature Park, south of Clark Road, to Payne Park in downtown Sarasota. As directed by the County Commission, she explained, staff has been working on all the surface improvements to complete the North Extension as quickly as possible.

The Florida Department of Transportation (FDOT) is going to build the overpasses at Clark Road and Bee Ridge Road, she noted. The department has scheduled those projects for a 2024 start, Rissler added.

As planned, she pointed out, the first segment of the North Extension will run from Proctor Road to Bahia Vista Street, including a trailhead at Webber Street. The reason that is at the top of the list, she explained, is that no water crossings — meaning no construction of bridges — are necessary to complete it. Therefore, the county’s permitting process will be easier, she added.

The second segment is to run from Culverhouse Nature Park to Proctor Road. Then, the final stretch will be the one from Bahia Vista to Payne Park.

A small trailhead will be included on Webber Street for that part of the North Extension, Rissler noted. Staff actually was completing the acquisition of the property necessary for that trailhead “as we speak,” she said. (The Condo Council meeting had begun just after 3 p.m. that day.)

On Jan. 14, the County Commission approved the acquisition of a 1.6-acre parcel located at 4010 Webber Street — east of The Legacy Trail North Extension corridor — at a cost of $188,000. A staff memo explained that the site “consists of a small opening under an oak tree canopy. The majority of the Site’s native vegetation consists of slash pine, oaks, wild coffee, beautyberry and saw palmetto.” Along with serving as a trailhead, the memo added, the property could be used partly as a small neighborhood park.

The board that day also approved an extra $64,000 to cover the closing costs, due diligence and start-up improvements.

Another trailhead has been planned on Pompano Avenue, near the Sarasota County Fairgrounds, Rissler told the Condo Council members this week.

Although the North Extension of The Legacy Trail was “contemplated for many, many years,” Rissler explained, a $65-million bond referendum on the November 2018 General Election ballot — which won the approval of over 70% of the voters who cast ballots on it — provided the funding for the purchase of the necessary railroad corridor for the extension.

In June 2019, she said, the last part of the corridor was acquired.

Out of the bond proceeds, she continued, $2 million was set aside for the development of a “Legacy Trail-like experience” from what is known as the Eastern Ranchlands territory into North Port.

Rissler showed the audience a map with three routes. One is an existing power line trail, she said. “We’re making improvements to this” so it will be usable as a natural surface trail, she added. “You can actually take [that] right now.”

It extends to the Myakkahatchee Creek Environmental Park, on which Sarasota County collaborated with the City of North Port, Rissler noted.

After considering “a lot of community input,” she continued, the preferred Legacy Trail extension to North Port was determined to be a route that will run parallel to Interstate 75 for some distance and then make a turn to run alongside a major drainage canal. Potentially, she said, that could connect to Warm Mineral Springs.

Yet a third option for Legacy Trail users, Rissler pointed out, is a firebreak and maintenance road.

On June 5, 2019, the County Commission also authorized a contract with consulting firm Kimley-Horn and Associates of Sarasota to handle the design and permitting of The Legacy Trail Extension Project, Rissler noted. That firm has the plans almost at the 60% mark, she added. It should reach that point within the next couple of weeks.

After that milestone has been reached, she continued, staff will hold more community meetings, so residents can get a look at the progress and offer comments.

At the outset of her presentation, Rissler told the Condo Council members that Kimley-Horn representatives and county staff members have been “working very hard. … I’m pretty sure some of our staff are in meetings three or four times a week on this topic.” 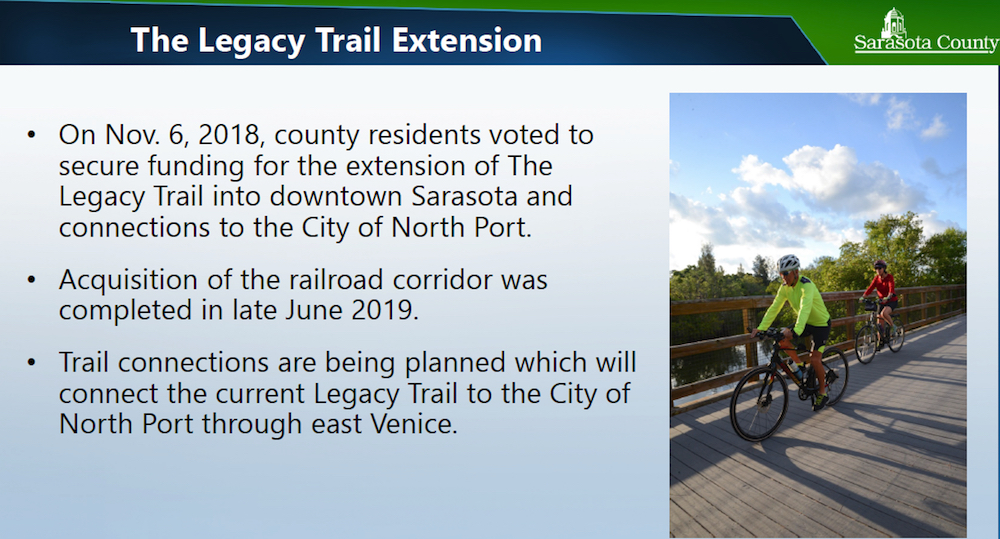 She laughingly added that, following the November 2019 bond referendum’s passage, staff was working on the assumption that the North Extension and the connector to North Port would not be completed before 2024. Yet, she said, 24 hours after the General Election, staff was told to get the county’s part of the construction completed by the end of 2022.

When completed, Rissler explained, The Legacy Trail will be a nearly 30-mile paved, non-motorized multi-use connector from Sarasota to North Port. A multitude of neighborhoods will have easy access to it, she added, and 48 schools will be within 2 linear miles of it.

And in response to a question, Rissler said that electric bikes are allowed on The Legacy Trail. However, “They still have to comply with the 15 mph speed limit and all other rules that are associated with regular bikes.”