After Florida’s Second District Court of Appeal ruled June 11 against Siesta Key resident Mike Cosentino in his North Beach Road case, he told The Sarasota News Leader he would pursue an appeal to the Florida Supreme Court.

Instead, he filed a motion on June 28, seeking a rehearing or a rehearing en banc by the Court of Appeal, arguing that the three-judge panel that heard the case misapprehended “facts in the record … as well as provisions of the Sarasota County Code and applicable statutory and case law …”

Cornell University’s Legal Information Institute explains that en banc is French for “on the bench,” adding, “The “term is used when all judges of a particular court hear a case.”

Cosentino added in his motion that “these matters involve questions of exceptional importance and the Court’s decision and rationale promise to have wide-ranging effects upon local governmental entities and private individuals statewide. Therefore, consideration by the full Court is appropriate.”

During a July 13 report to the County Commission, County Attorney Frederick “Rick” Elbrecht discussed the Court of Appeal ruling. He also noted the motion for rehearing and the potential of Cosentino’s seeking a Supreme Court review of the case. However, Elbrecht added, “Historically, both those efforts have a low chance of success …”

In his new motion, Cosentino argues that the June 11 ruling undermines the Legislature’s intent that citizens have the right to enforce local government consistency with comprehensive plans.

When he filed his complaint against the county, Cosentino formally alleged that the County Commission violated Chapter 163.3161 of the Florida Statutes, which is called the Community Planning Act. Section 6 of that law says, “It is the intent of this act that adopted comprehensive plans shall have the legal status set out in this act and that no public or private development shall be permitted except in conformity with comprehensive plans, or elements or portions thereof, prepared and adopted in conformity with this act.”

Cosentino has contended that the commissioners violated a provision of the county’s Comprehensive Plan when they voted 4-1 on May 11, 2016 to vacate a 373-foot-long segment of North Beach Road on Siesta Key. At the time, county Environmental Policy 1.1.13 said, “The County shall not vacate road segments on waterfronts along any creek, river, lake, bay or Gulf access point and shall encourage right-of-way use of these areas for coastal beach and bay access.”

During an update of the Comprehensive Plan that was completed in the fall of 2016, the board members amended that policy to give themselves more flexibility with road vacation petitions.

In its ruling for the county, the Court of Appeal also struck down two Sarasota County Charter amendments that Cosentino contends in his new motion were “born to protect public property, including, but not limited to,” the section of North Beach Road.

During the April 13 oral arguments before the three-judge panel of the Court of Appeal, Cosentino acknowledged that he knew the Charter amendments were illegal when he wrote them. He has explained to the News Leader that he felt his effort to try to win their approval was an alternate means of returning the vacated segment of North Beach Road to public ownership and, moreover, to prevent such County Commission action in the future when a road has so much as a view of a water body.

Yet, in his motion for rehearing, Cosentino argues that the June 11 Court of Appeal opinion overlooked or misapprehended the fact that “Sarasota’s voters, not the government, are the sovereign. … The Court overlooked or misapprehended that Sarasota’s voters gave themselves the right to limit the County’s powers through section 3.6 [of the Charter] and merely exercised that right by approving [his Charter amendments].”

In his June 28 motion, Cosentino also continues to assert — as he has throughout the litigation — that the County Commission could not have granted a Coastal Setback Variance for new construction to one of the three sets of petitioners for the road vacation if the board had declined to approve the vacation.

Dennis and Wendy Madden wanted to demolish 12 structures between North Beach Road and Avenida Veneccia that were decades old and no longer complied with modern building standards. To be able to comply with county regulations relating to their plans for a new six-unit condominium complex, they needed the “unity of title” of lands they owned seaward of North Beach Road, plus the vacated road segment, plus their property landward of the road. The total square footage would be sufficient for the residential density they were seeking for the new building, representatives of the Maddens explained to the commissioners during the May 2016 hearing.

“Each element of the underlying case,” Cosentino adds in his motion, “is inextricably intertwined with [the road vacation resolution the commissioners approved] …”

Additionally, he once again stresses, the county’s Comprehensive Plan “expressly states the county ‘shall not vacate’ such waterfront road segments,” even though the plan was updated in 2016.

In its unanimous June 11 ruling for Sarasota County, Cosentino continues, the Court of Appeal panel wrote that his arguments are “meritless and warrant no further discussion.” In his June 28 motion, he writes, “Respectfully, the record suggests otherwise.”

Citing Section 163.3164 of the Florida Statutes, Cosentino argues in his new motion — with emphasis — that “a development order [is] ‘any order granting, denying, or granting with conditions an application for a development permit.’” He was referencing the Maddens’ Coastal Setback Variance.

Further, he writes, again with emphasis, the same chapter of state law includes among its definitions of a development permit “‘official action of local government having the effect of permitting the development of land.’”

Additionally, he points out, Section 380.04 of the Florida Statutes lists activities that involve development. Among those, he continues, “‘The term “development” means … the making of any material change in the use … of any structure or land, or the dividing of land into three or more parcels.’”

Then Cosentino writes that the Second District Court of Appeal in a 2017 case, Heine v. Lee County, “ruled that comprehensive plan consistency challenges under [Section 163.3215(3) of the Florida Statutes] are limited to those challenges that ‘materially alter’ the use or density or intensity of use on a particular piece of property.’” 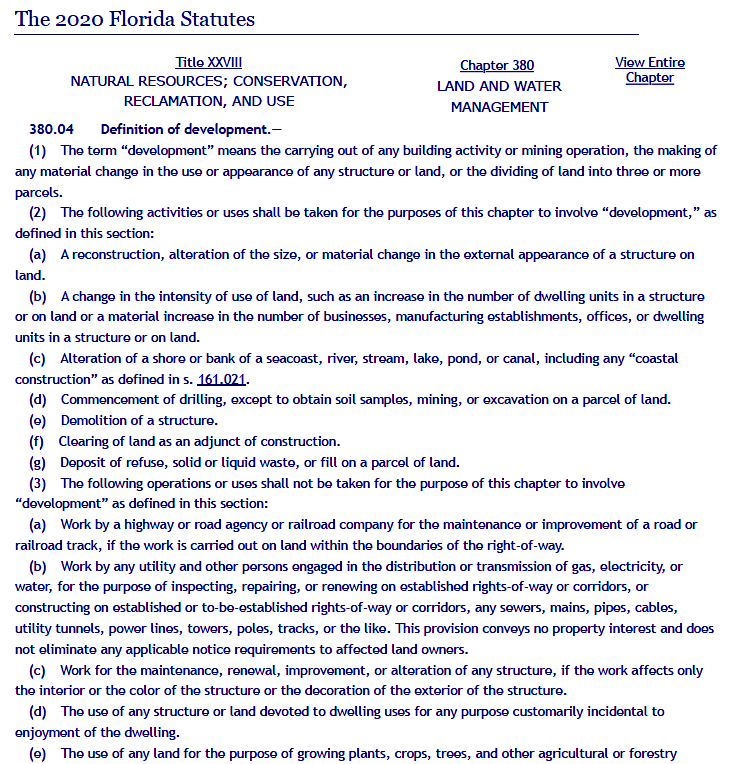 The County Commission’s approval of the North Beach Road segment vacation made a “‘material change in the use’” of the vacated portion of the road and divided the road into three or more parcels, he argues, again with emphasis, referencing the state law.

That division of the property, he points out, “is an express definition of development” in Section 380.04(1) in the Statutes.

Then he contends that “the most troublesome portion of the [Appeal Court’s] reasoning is its acceptance of the county’s and trial court’s flawed logic” that Section 380.04(3)(h) of the Statutes, “including ‘the creation or termination of … rights in land,’ overrides the limitations the legislature placed on that section” by enacting Section 380.04(4). “[W]ithout the limitations placed upon [part of that statute], most comprehensive plan consistency challenges … could not exist,” he points out. “Indeed, every one of the actions listed as ‘development permits’ in [Section 163.3164(16) of the Statutes] either creates or terminates rights in land.”

Cosentino also specifically sites a 2011 Fourth District Court of Appeal case, Graves v. Pompano Beach, which, he says, involved approval of a resolution authorizing “a material change in the use of land.” In its ruling in that case, the Fourth District Court found that that resolution had “‘the effect of permitting development’ and, as such, ‘falls squarely within the Florida Statutes of a ‘development permit.’”

Cosentino adds that the Fourth District Court clarified in its ruling that Section 163.3164 “‘does not suggest that a development order is one which grants development rights only in the advanced stages of the development process or to a shovel-ready project …’”

Finally, Cosentino again contends that the county did not file notice of the vacation of the segment of North Beach Road in a timely fashion, as required by state law.

Appeal Court Judge Susan H. Rothstein-Youakim did question the parties about that issue during the oral arguments. However, in writing the June 11 ruling, she concluded, “The record indisputably establishes that Cosentino has been afforded ample opportunity to participate and be heard [in regard to the commission’s road vacation decision],” and he never made an allegation to the contrary.

The county’s response to Cosentino’s call for a rehearing — written by Assistant County Attorney David Pearce — points out that such motions should be filed only “under limited circumstances; they are an exception to the norm.”

“Because this Court’s opinion does not discuss the first four issues raised by Cosentino in his motion,” Pearce continues, “but rather found the arguments concerning them to be ‘meritless and warrant no further discussion,’ Cosentino instead speculates that the Court must have overlooked or misunderstood his arguments, despite having presented the same arguments in his initial brief, reply brief, and at oral argument. Thus,” Pearce adds, “Cosentino reargues what he has previously presented to the Court and does not specifically indicate what the Court overlooked or misapprehended in its opinion.”

In regard to the fifth issue, Pearce writes that Cosentino keeps contending that the road vacation resolution the County Commission approved “was a necessary precedent to the County’s ability to vote upon and approve” the resolution regarding the Maddens’ petition for the Coastal Setback Variance for the new construction. Pearce called that a “faulty argument … [that] was previously raised in the briefs and at oral argument.”

Addressing the notice issue in his response, Pearce — like Judge Youakim-Rothstein — emphasizes that Cosentino focused on the “post-hearing publication” of the road vacation notice. “There is no question that the County properly advertised the hearing to vacate the road in its pre-hearing publication,” Pearce continues. “Thus, Cosentino along with all other members of the public had proper notice of the public hearing where the Board would decide whether to vacate the road.”

Further, Pearce notes Cosentino’s contention that the Court of Appeal ruling “will have statewide ramifications and undermine the public purpose of consistency challenges” regarding comprehensive plans. However, Pearce adds, “Because the Court’s decision does not discuss the consistency challenge and instead concludes that Cosentino’s arguments concerning same are meritless, there is no precedent set by the Court with regard to Chapter 163 [of the Florida Statutes]. Thus, the Courts opinion is not one of ‘exceptional importance.’”