On a series of motions during an Oct. 1 special meeting, the Sarasota County Commission approved tweaks to the application process to make it easier for businesses to apply for grants out of the Coronavirus Relief Fund (CRF) money the county is receiving from the federal government.

Additionally, the board members unanimously agreed to an allocation model for the rest of the $75.7 million it expects out of the federal CARES Act funding that has gone to the state. This summer, the County Commission formally accepted the first 25% of the funds — $18.9 million. On Oct. 1, the commissioners agreed with the staff recommendation to divvy up all but 25% of the remaining money according to the same model they used for the first portion.

The distribution system would change with the final 25% of the $75.7 million, as money would go to the county, as well as to the cities, law enforcement agencies, the Office of the Clerk of the Circuit Court and County Comptroller, and Court Administration for steps all of them have taken to provide safety and security measures in contending with the novel coronavirus pandemic.

Ultimately, County Administrator Jonathan Lewis explained, $34 million would go to businesses, while $22 million would be awarded to individuals needing rent and mortgage aid, for examples, as well as entities that are providing food and shelter to people adversely affected by the economic downturn the pandemic has produced.

On another unanimous vote on Oct. 1, the commissioners agreed to allow nonprofits to be treated the same as businesses in applying for grants ranging from $20,000 to $49,999. Previously, $20,000 was the maximum grant a business could receive.

Lewis explained that staff will contact those businesses that already have received funding; those that have submitted applications but have been awarded no money yet; and those that started the application process and then stopped it, for whatever reason. Therefore, all of those businesses will have an opportunity to seek up to $49,999 each, he added.

The board members also approved an allocation of $5,007,900 to 40 arts and cultural organizations in the county, which will be divided up on the basis of the most recent formula used for the awarding of annual grants out of the county’s Tourist Development Tax — or “bed tax” — revenue. Lewis explained that that model would provide funds to the groups that would range from $10,000 to $220,000.

Acting on behalf of the arts and cultural organizations, Richard Russell, executive director of Sarasota Opera, asked that the board approve the funding program, which he said was modeled after a Miami-Dade County CARES Act initiative.

Additionally, the board members voted 5-0 to approve a revised proposal from Visit Sarasota County (VSC) — the county’s tourism agency. That calls for $455,000 in Coronavirus Relief Funds (CRF) to attract group meetings to the area “throughout 2021-2022 by showing the safety steps that have been taken in our community to combat Covid-19,” as noted in “talking points” emailed to the county on Oct. 1.

However, Lewis did explain that staff and its outside consultants still were working to ensure that that funding would not violate U.S. Treasury Department or state criteria for the awarding of CRF money.

The motion, made by Commissioner Nancy Detert, included the caveat that the grant would be contingent on a staff decision that it would comply with federal and state guidelines.

“I think Visit Sarasota County should be rewarded for helping businesses with their paperwork,” Detert said. “Our hotels at one point were at 10% occupancy,” she noted, and one of Gov. Ron DeSantis’ early Executive Orders limited restaurants to 25% occupancy levels.

Commissioner Christian Ziegler did call for VSC to provide documentation about its return on that investment, if it ends up with the money.

An airing of frustrations

At the start of the Oct. 1 meeting, former Commissioner Christine Robinson, executive director of the Argus Foundation in Sarasota, urged the board members — as she did six weeks ago, she pointed out — to get the CARES Act funding out to people and businesses in the community as fast as possible. “We are asking that you act today,” she said. “We’ve reached D-Day; we can’t want any longer.”

Commissioners also emphasized speed to County Administrator Lewis and the team working on the grant process the board agreed to in late August. Chair Moran stressed the board members’ desire to see “the money on the street now as fast as humanly possible.”

He and others did acknowledge the efforts of staff — as well as those of representatives of outside legal and accounting firms that staff has hired — to try to protect the county from having to return any funds to the federal government if audits determined that grants were awarded inappropriately.

“We have the obligation and the burden … to prove … that these folks were impacted by [the pandemic] and have the appropriate documentation [to show that],” Moran said.

Nonetheless, Commissioner Charles Hines pointed out that Sarasota County waited longer than other counties to launch its CARES Act grant programs, so staff could learn lessons from other counties’ experiences. The county team members said they felt that delay would end up enabling Sarasota County to move more quickly in dispersing the funds, he noted.

Yet, Hines said, “I feel like here, today, we are creating the wheel, and I don’t understand that.”

Sarasota County staff, he added, had worked initially on a model incorporating guidelines provided by the Federal Emergency Management Agency (FEMA) for allowable expenditures in the aftermath of a natural disaster. Hines said he disagreed that FEMA direction was applicable to the CARES Act situation. “This is a nationwide pandemic. … Why are we struggling so hard,” especially given the assistance of the outside legal and accounting firms?

“All of us as commissioners have received calls after calls after calls,” Hines continued, with constituents pleading for help because of difficulties applying for the grants. This week, he said, he had hoped to see a much higher number reported for approved applications. If the pace has not quickened by next week, Hines added, he would be very upset with the county team members handling the process.

As of the morning of Oct. 1, Rich Collins, director of the county’s Emergency Services Department, said $601,000 had been distributed to businesses and $119,000 to individuals.

“I’m more interested in speed than worrying about the risk,” Commissioner Ziegler said.

One extra step County Administrator Lewis and County Attorney Frederick “Rick” Elbrecht did ask the commissioners to take with votes on Oct. 1 was to incorporate findings of fact with motions, in an effort to provide more liability protection to the county. The commissioners agreed to that. 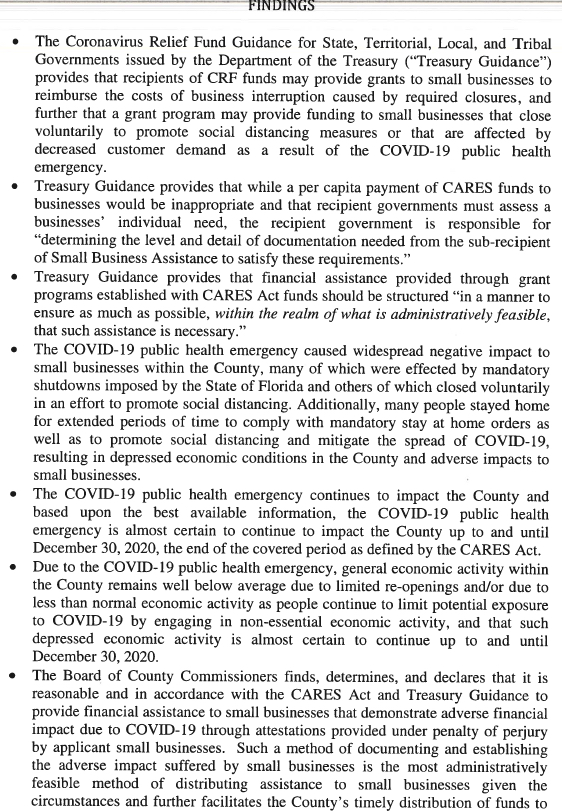 During the Open to the Public period at the start of the meeting, Heather Kasten, president and CEO of the Greater Sarasota Chamber of Commerce, pointed out that the requirements for businesses at the outset of the grant process created “a very onerous application.”

Lewis told the commissioners that he believed the revisions of the application requirements they were considering that day would balance “risk with the board’s goal of getting the money out as quickly as possible.”

What he was proposing, he explained, was moving from what he characterized as a “document-intensive” process to one that would allow a business owner to attest to financial impacts from the pandemic. A business owner still could opt to provide documentation of expenses related to dealing with the repercussions of COVID-19’s effects on the economy, he added, if that was the owner’s preference.

“The biggest complaint I hear is [the requirement] for profit and loss statements,” Commissioner Detert told Lewis.

Companies did not have to provide those as the applications originally were structured, Lewis replied. Nonetheless, concerns about the amount of documentation led staff to recommend the attestation process instead, Lewis said. For example, a business owner would indicate the firm spent a specific amount of money on personal protection equipment and just submit that through the county’s online grant portal.

On the other hand, Lewis added, “They can just provide their bank statements, if they want.”

Further, Lewis pointed out, “We have given [businesses] options to protect proprietary information.”

The law firm staff hired to assist with the CRF process, Lewis continued — Nabors Giblin & Nickerson, which has offices in Tallahassee, Tampa and Plantation — had suggested staff shift to a tiered approach with business grant amounts. That would mean that larger companies would get more money, Lewis added. However, he chose not to recommend that approach. “I just don’t think it matches our business community here in Sarasota County.” Some of the smaller businesses, he said, have incurred higher losses because of the pandemic.

Nabors Giblin & Nickerson also had advised staff not to treat nonprofits like businesses in regard to the grant process, Lewis continued. Yet, he said, “I just don’t see where that’s written anywhere in [U.S.] Treasury or state guidance” about the legal expenditures of CRF money.

That was why, he said, he felt nonprofits should be treated like businesses.

Commissioner Alan Maio told Lewis he understood that staff and Clerk of Court Karen Rushing “are steadfastly trying to reduce the risk” that the county will have to return funds to the federal government because of a failure to meet eligibility requirements. Nonetheless, Maio and his colleagues concurred with Lewis’ recommendation on the nonprofits.

Following the board actions, Kasten of the Greater Sarasota Chamber of Commerce told the commissioners, “I think it’s been a great discussion today. I think we’ve definitely advanced the ball down the field.”