Citing revenue concerns, board members concur that asking voters to approve a new tax would not be appropriate this year, given public health emergency

In the spring of 2019, Sarasota County Commissioner Michael Moran broached the idea of a county Mental Health Care Special District, citing the provisions of Florida Statute 154.331.

On Aug. 27, 2019, during his board’s first regular meeting after its traditional summer break, he won his colleagues’ consensus for staff to research the potential of a voter referendum to create such a district. Voters would need to approve the county’s levy of a tax whose revenue would be dedicated to the district’s functions, he explained.

The commissioners laid more groundwork in December 2019 — including unanimously agreeing that they wanted to have oversight of the district’s operations, instead of creating an independent board for that purpose.

Then, on Feb. 6, county staff launched a survey, seeking public views on a variety of issues related to a district. By this month, staff explained, the commissioners would need to provide direction so an ordinance could be crafted to cover all the necessary facets of the district. A public hearing would have to be conducted in July, the commissioners were told, to get the referendum on the November ballot.

Amid all the planning, the novel coronavirus struck the United States, producing a multitude of ramifications. As it turns out, one of those will be cancellation of the planned Mental Health Care Special District referendum this fall.

The board members made that decision near the end of their regular meeting on April 8.

And as Moran — the commission chair this year — indicated, that decision likely will be far from the last revenue-related step the board has to take this year.

Referring to the revenue situation in general, Commissioner Alan Maio put it bluntly on April 8: “I think anybody out there who’s planning on bringing us something that’s going to cut our … tax receipts, impact our tax receipts or cause us to raise money, needs to think about 10 times before they bring it to us and not put us in that spot.”

“Timing is everything,” Moran responded, referring to the special district. “And the timing on this couldn’t be any worse.”

County Administrator Jonathan Lewis brought up the issue as part of his report that day, saying he needed board direction on a proposed agenda item for the next regular meeting — set for April 22. “It’s a topic that could possibly bring people out for public participation,” Lewis said, “and we want to be careful about that right now.”

In fact, county staff had worked to encourage members of the public to submit comments ahead of the April 8 meeting, instead of coming to the Commission Chambers in downtown Sarasota that day to appear during the Open to the Public portion of the session. The goal has been to emphasize the social distancing national and state leaders in public health have emphasized as the best means of diminishing the virus’ impact.

Lewis explained on April 8 that if the board members wanted to stay on track for putting the Mental Health Care Special District on the November ballot, they would need to make several more decisions. Among those would be the millage rate and an enumeration of the services to which the funds would be allocated.

“I just need to know from the board, is this an item that we’re bringing [forward] on the 22nd?” Lewis asked.

“I think there’s two ways to look at this,” Moran responded first. “We are going to have a significant number of our residents falling on tough financial times. You don’t need to be a psychologist to know that there’ll be a tremendous amount of anxiety and depression,” he added, as a result of the public health crisis’ impact on people’s livelihoods.

A different view, Moran continued, is that, “in good faith, it is difficult to ask the taxpayers of Sarasota County to vote on this issue … when we really don’t know the full impact of this financial crisis that’s coming about, given COVID-19. I could easily argue both sides of this for the mental health care needs …”

“I agree with Part 1 of what you just said,” Commissioner Nancy Detert replied. “It’s a really testy time to raise people’s property taxes. At the same time,” she continued, “we could end up cutting our own budget. So you’re asking existing programs to take a hit while you institute new programs, and I don’t think that’s a great position to be in. … If we have to delay [the referendum] a year, I think people understand. This is almost an act of God, a moment that was totally unpredictable.”

Commissioner Maio said he was fully supportive of the proposal to create the district, but “This may be the time to pause this for a year.”

He concurred with Detert about the potential for having to cut existing services — “some things that we absolutely don’t want to cut” — given the expectation of sharp declines in revenue for the rest of the fiscal year, which ends on Sept. 30.

Commissioner Christian Ziegler expressed the view that it would be unfortunate to see voters oppose the creation of the district, given all the effort staff and the board would have put into the initiative, if the referendum were to go on the ballot this fall. His preference, he continued, would be to revisit the issue in the future.

Then Commissioner Charles Hines pointed to the necessity of his hearing “a lot of the public input” before he could vote to place the question on the November ballot. It did not appear likely the board could hear that public debate within the next few weeks, Hines added.

Moreover, he said, the public workshops that would be necessary to educate residents about all the facets of the proposed district could not be conducted amid the COVID-19 public health emergency. Without those sessions, he continued, he feared the referendum question would “get lost” on the ballot.

“I love the idea [of the district],” Hines said. “It just may not be the right time.”

Maio then told Moran, “You bring it back to us when the time is right.”

When Moran asked whether Lewis needed anything further, Lewis replied, “Thanks for the policy direction.”

In his initial response to Lewis, Moran did note the work staff undertook to provide the survey in February, as well as the results of that effort. Moran called the comments from the public “extraordinary, incredibly thoughtful, filled with passion [and] real-life examples.”

He offered his appreciation to county residents, saying he could not “thank [them] enough.”

In response to a public records request, The Sarasota News Leader obtained the 49-page document detailing the results of the survey, which was conducted from Feb. 6 to Feb. 28. The document also included comments of participants who chose to provide them.

In response to the question, “Do you know someone who has needed or used mental health services in Sarasota County?” 67.68% of 1,652 respondents answered, “Yes.”

Then the survey asked respondents to check all that applied on a list of “traditional mental health services” for which they would support funding through an increase in property tax.

The answer with the highest percentage of answers was “All of the above,” at 19.19%.

Another 7.88% checked, “I do not support an increase for any of these services.”

Question 6 on the survey asked, “What is the maximum ANNUAL increase to your property tax bill you would support to expand mental health services in Sarasota County?” The figure that won the highest level of support — 29.3% of the answers — was a figure between $50 and $100. Another 21.9% replied that they did not support an increase, while 18.82% marked “$50 or less.”

The bulk of the report included comments respondents provided — Pages 11-49. Among them, viewpoints varied widely, based on a News Leader review. The following are three pages selected at random: 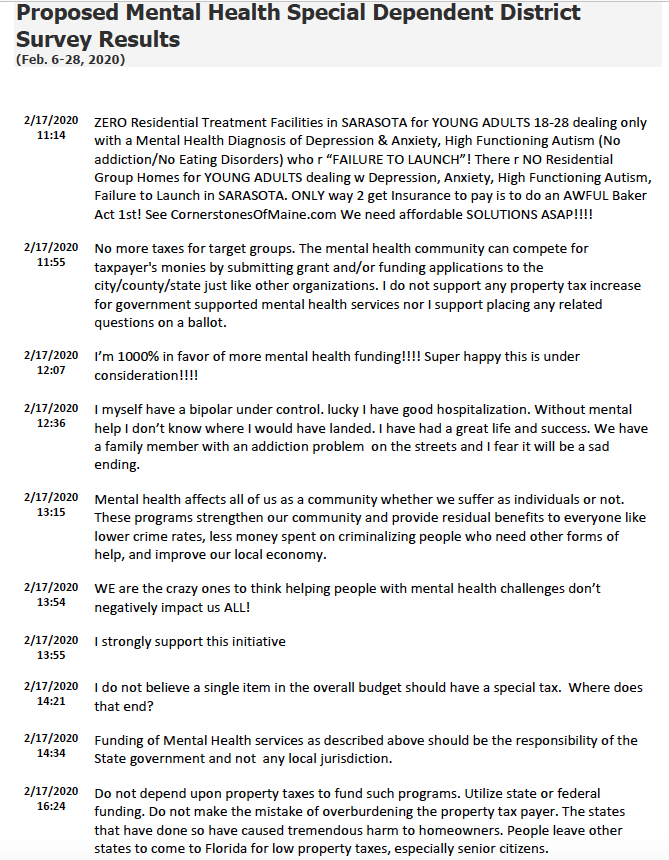 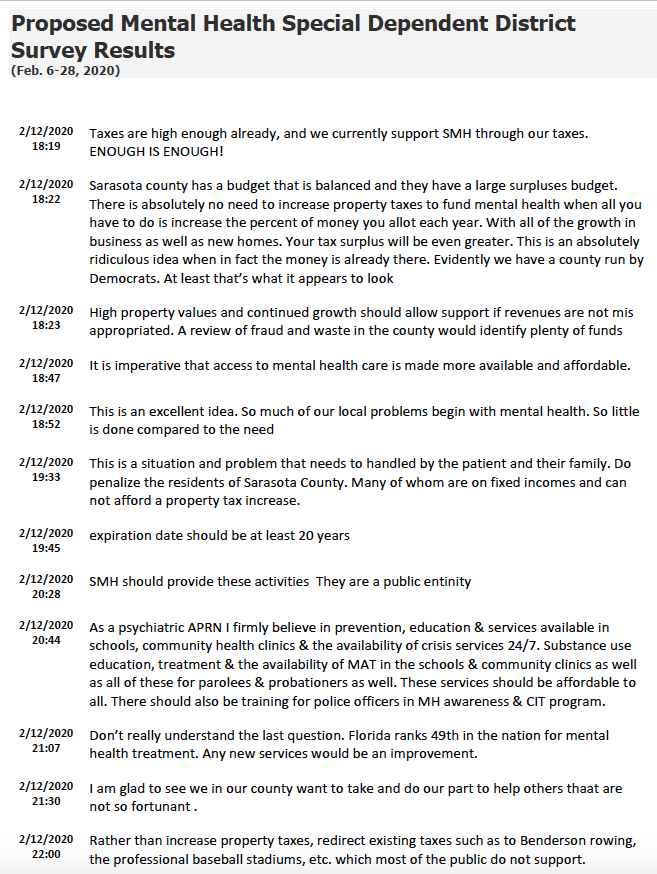