Commissioner Moran proposes implementation of such a district, as allowed by state law, with property tax revenue to provide funding stream

Sarasota County Commissioner Michael Moran has won his colleagues’ support for research into the potential of a voter referendum on creating a Mental Health Care Special District, as allowed under Florida law.

Moran first brought up the idea this spring during a budget workshop. In early August, while the board was still on its annual summer recess, he emailed County Administrator Jonathan Lewis, asking that the issue be included under his report for the first commission meeting after the break, which was set for Aug. 27.

“Obviously, this is a detailed conversation and needs much input from my fellow Commissioners,” he wrote in his Aug. 27 email.

In light of the board’s Aug. 21 discussion regarding funding for a new jail diversion program that would treat offenders suffering with mental health and substance abuse problems, Moran said on Aug. 27, he was seeking consensus for making research into creation of such a mental health special district an official staff assignment.

The referendum would ask voters to approve the county’s levy of an ad valorem tax for the district, Moran explained.

If voters supported the initiative, he continued, then a five-person governing board would be established to oversee the district. Gov. Ron DeSantis would appoint two of the members, Moran added, while the County Commission would appoint the remainder.

The statute says the governing board “shall consist of not less than five members,” all of whom must have been residents of the county for a minimum of 12 months prior to their naming to the board. Additionally, “No member shall serve for more than two consecutive terms.”

Such a district can be “incredibly flexible,” Moran pointed out on Aug. 27. “It can be customized to the community that you live in.”

The district’s guidelines could be written to allow it to address changing needs in the county over coming decades, he stressed. If the district no longer were needed at some point, Moran said, the County Commission could cease collecting the ad valorem tax revenue for it. 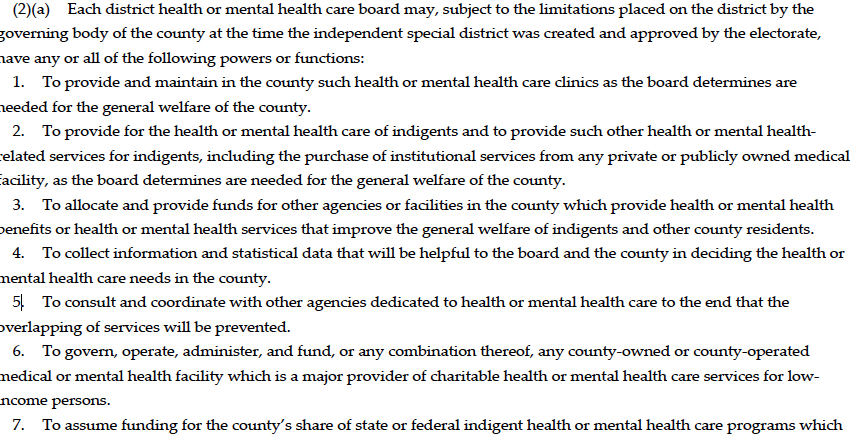 The law does not allow the district board to issue any bonds, he noted.

“They’ve done already some significant legwork [on the issues],” Moran noted of the foundations.

They commissioned research by the University of South Florida’s College of Behavioral & Community Sciences on the mental health of children and youth in Sarasota County, he explained. The final report covers the period from July 16, 2018 through Feb. 28 of this year, the report says. (It was submitted on March 8 to the foundations, the report adds.)

Among its findings, Moran added, are that one in five youths in the county “experiences a severe mental disorder during their life.” Additionally, he continued, “Half of all chronic mental illness begins by the age of 14; three-quarters by the age of 24. The average delay between onset of symptoms and intervention and treatment is 8 to 10 years.”

Finally, Moran pointed out, “The annual economic impact of untreated mental illness is in excess of $86 million.”

One of the study’s recommendations, he added, is the creation of a governance structure “to lead a unified system of care.”

“I think this just might be a very unique opportunity for our community,” Moran told his colleagues, referring to an effort to establish a Mental Health Special District.

If the board consensus was to seek staff work on the proposal, he added, he would hope the resulting report would include details about “what timeline would be necessary [for holding the referendum]” and what public outreach should be conducted in advance of that.

A mix of board members’ reactions

“I don’t disagree with a word you said about the need,” Commissioner Nancy Detert responded. Florida, she said, is ranked 49thout of the 50 states for the funding it allocates to mental health issues.

Nonetheless, Detert pointed out, decades ago, a referendum was conducted in the county on a proposed initiative that would have provided special services for children; voters did not support that. She indicated that the primary concern leading to that voter response was the lack of a structure through which elected officials would be responsible for oversight of the taxing body.

Furthermore, Detert asked her colleagues to consider “Is it disingenuous to say, ‘We haven’t raised your taxes in 21 years,’ but we’re starting to have all these carve-outs.”

During workshops in preparation of the 2020 fiscal year budget, commissioners have noted that boards actually lowered the millage rate during the Great Recession and kept it at the 3.3912 level. It will go up to 3.4331 for 2020 because voters in November 2018 approved a $65-million bond referendum to extend The Legacy Trail to downtown Sarasota and into North Port.

During the Aug. 27 discussion, Detert said she felt it would be better for the board to “keep all the [property tax] money in one pot” and allocate the revenue as needed, based on the priorities the board sets for each year.

Still, Detert told Moran, “You have identified the problem. I certainly have the appetite to work on solving that problem. I think that’d be a wonderful, wonderful legacy for you guys. … But be careful of the process.” She emphasized the need for a mechanism for accountability in regard to the governing board of a special district.

Discussions he has had with members of the community have focused on the accountability issue, Moran replied, especially, “making sure there’s no ‘mission creep,’” through establishment of “measurables and deliverables.”

He added that whenever “substantial funds” are raised for an initiative, concerns arise that some of the money could be diverted to purposes beyond the original goals.

Detert suggested county staff research Hillsborough County’s special taxing district for services to children. “Multiple counties have that. … I think they’ve had many hiccups along the way.”

“I think this is an important need,” Commissioner Christian Ziegler said. “Let’s do some research.”

The potential exists, Hines noted, that funds from a Mental Health Special District could be used to support the operations of the 40-bed community treatment program the board approved the previous week on a two- to three-year trial basis, to reduce the jail population. “That would be very good. … You would sure hate to have to fight that battle every year for General Fund dollars” to keep the facility functioning.

The county’s General Fund, which is made up primarily of property tax revenue, is the most constrained of all the accounts in the county, Office of Financial Management staff has explained. It pays for the operations of numerous departments under the purview of the County Commission, as well as those of most of the county constitutional officers, such as the sheriff and the supervisor of elections.

Hines told County Administrator Jonathan Lewis to make the research an official board assignment. Hines then said he would call for a vote on Moran’s proposal in the form of a motion, which he considered Detert to have seconded. The motion passed unanimously.