Cities of Sarasota and Venice to keep their beaches closed, with county administrator having called for them to be able to take those steps

While Sarasota County staff stressed that the word “reopening” should not be used, the county commissioners voted unanimously this week to allow people as of Monday, April 27, to once again access the county’s beaches for exercise. However, the board decision came with emphasis on continued observance of the social distancing guidelines promulgated by the U.S. Centers for Disease Control and Prevention (CDC).

The parking lots will not be open, but the restrooms will be, county Communications staff clarified for The Sarasota News Leader.

The commissioners also agreed that they would revisit the parking lot issue during their next regular meeting, which is set for the first week of May.

“I don’t really like the parking lot being closed, to be honest,” Commissioner Christian Ziegler said. “It’s a little discriminating,” he added, because people who live within close proximity to the beaches will be able to take advantage of the easing of the restrictions. People who live 5 or 6 miles away would need to drive to the shoreline, Ziegler continued. “Siesta Key may be, in particular, where they’re going to come anyway and park wherever they feel like parking.”

Chair Michael Moran added that he fears a lot of people will park on private property. “Maybe a very specific date [would be appropriate, for the parking lots to reopen], so staff can prepare,” he said, suggesting May 4 or May 11.

Commissioner Charles Hines countered, “I have two kids home from college … If Siesta Key Beach was fully open … that’s where they’d go,” regardless, Hines continued, of the discussions he has had with them about the need to stay safe during the public health crisis.

Commissioner Alan Maio noted that the board likely would have its next regular meeting nine days after the lifting of the specific restrictions on April 27. “At that point, we all may be very comfortable [with opening the parking lots].”

In light of the discussion, Commissioner Nancy Detert said she would make a simple motion to give County Administrator Jonathan Lewis considerable flexibility in how to move forward. The motion called for staff to “open the beaches with restrictions.”

“We all know that we could go down to the beach right this very minute and see people walking on the beach, but in a socially responsible manner,” Detert said. “We’re just allowing that privilege for everyone else.”

All county public beaches have been closed since 6 a.m. on March 21. At that time, with Manatee County preparing to close its beaches, Sarasota County leaders said they had heard talk of spring break groups heading to Florida’s west coast after south Florida municipalities closed their shorelines in an effort to prevent spread of the novel coronavirus.

On April 22, Detert offered one view about why Sarasota County again should allow the public on its operated beaches: “This has to deal with mental health. People are getting so cooped up … They’re almost getting used to being isolated.” Yet, for those with anxiety problems and other mental health issues, Detert continued, “It would be more healthy to be out in the sunshine, walk the beach, get some exercise. Exercise is always good for your mental health.”

“I think our residents have done a great job during this [pandemic],” Ziegler added. “They’ve followed the [CDC] recommendations,” he continued, so he expected they would do the same with the easing of restrictions at the beaches. “I don’t expect to see a Drum Circle on Sunday, right?” he added, referring to a long-time popular activity on Siesta Public Beach.

At the outset of the discussion, County Administrator Lewis said he was basing his recommendation for the beaches on Gov. Ron DeSantis’ Executive Order 20-91 — the “safer-at-home” advisory issued on April 1. That designated as essential activities those that Sarasota County will allow on the beaches, Lewis noted, “but not things like bringing in a cooler and setting up a canopy and spending the day at the beach.”

“We’ve looked at the parking,” Lewis added, but staff decided that it would be better to phase that in, leading “ultimately to a full opening of our beaches.”

Lewis likened the relaxed restrictions on the shoreline to the county’s keeping its open park spaces available to the public, including facilities — such as Benderson Park — that are managed by other entities. For example, he said, people have continued to visit the Celery Fields, which is an internationally known bird-watching area in the eastern part of the county, and Rothenbach Park, which is located at 8650 Bee Ridge Road in Sarasota.

One primary concern, Lewis did acknowledge, is safety for county employees who will be working at the beaches. He also pointed out that he talks regularly with Sarasota County Sheriff Tom Knight, indicating that Knight was in agreement with Lewis’ recommendation.

In response to a News Leader request, Kaitlyn R. Perez, community affairs director for the Sheriff’s Office, sent the following statement about the County Commission vote: “[W]e will continue to approach our citizen contacts using education over enforcement; a philosophy we adopted at the launch of COVID19. The open space at the beach will be used strictly for essential activities to include walking, running, fishing, surfing and swimming. This does not include congregating, lounging, coolers or alcohol, umbrellas/towels/chairs, etc. There will also be no access to parking lots, concession stands or the playground area. Sarasota County Communications has done a great job informing the public of open space areas and what rules are in place. We trust they will continue educating the public and we will support them by also educating visitors and being ambassadors to our community. So far, Sarasota County [residents have] been extremely cooperative and embraced their own form of self-policing when it comes to social distancing. We trust our residents will continue to play by the rules as the county begins to open back up. Our Siesta Key Substation remains open and fully staffed, ready to support the county and our residents, however we can.”

During his opening remarks on the issue on April 22, County Administrator Lewis noted that the Charlotte County Commission voted the previous day to take action regarding its beaches, similar to what he was recommending for Sarasota County.

An April 21 Charlotte County news release says that that county’s beaches would reopen on April 27, but all the restrooms would remain closed. “Please follow Centers for Disease Control guidelines for social distancing,” the news release added. “Gatherings of 10 or more are not permitted under Gov. Ron DeSantis’ executive order.”

“They really want to work in unison with us,” Lewis told the Sarasota County commissioners, referring to the Charlotte board members and staff. “That has been clear.”

Manatee County leaders are “not quite there yet,” Lewis continued, in terms of easing restrictions on their shoreline.

Early on during the April 22 discussion, Commissioner Maio reported that he had talked with Mayor Ron Feinsod of Venice. Feinsod had asked him, Maio continued, to convey to the other county commissioners that Feinsod “would not want to see the beaches opened, period.”

When the News Leader contacted Lorraine Anderson, the public information officer for the City of Venice, she wrote in an April 22 email, “In the City of Venice, the South Jetty (Humphris Park), Venice Fishing Pier, Brohard Paw Park, playgrounds and tennis courts will remain closed [her emphasis].”

County Administrator Lewis pointed out on April 22 that while the county manages beaches for county municipalities, any city that wanted to keep its beaches closed could send a formal letter to him to that effect. “That is not something that we would make an issue of,” Lewis added of such individual decisions. “This shouldn’t be a point of conflict between us and the municipalities.”

In response to a News Leader request for comment from the City of Sarasota, City Manager Tom Barwin issued the following statement: “These decisions must be guided by public health and medical considerations. At the National level both Dr. [Anthony] Fauci and Dr. [Deborah] Birx have suggested that lifting restrictions on social gatherings should only be considered by Governors, County Commissions, Mayors and City Managers, following two weeks of no increases and preferably declines in new [COVID-19] cases. Lessening restrictions early,” Barwin continued, “especially with limited local testing, could backfire over time. We surely do not want to go through this again. I know how hard this has been for everybody, but our recovery needs to be smart, well thought out, rock solid and sustainable.”

Barwin added, “[A]lthough the Florida Death rate per 100,000 residents is 4, [the] Sarasota County [rate] is almost double that at 7.2 and Manatee [County’s] may be even higher.”

Therefore, he wrote, in the aftermath of consultation with Mayor Jennifer Ahearn-Koch, “the City of Sarasota will continue to be guided by the science and credible medical advice. I do not see our situation changing prior to May 1st, although we do evaluate everything on a daily basis.”

Public views of the issue

In advance of the April 22 meeting, county Communications staff collected 71 comments about the potential reopening of the beaches, which it provided to the news media. Because of the social distancing practices in place for the County Commission meetings during the pandemic, staff had asked the public to send comments electronically, so those could be given to the board members on April 21.

As of 9 a.m. on April 21, Media Relations Officer Brianne Grant reported that 65 public comment cards had been received. The News Leader counted a total of 71 in a file staff made available to the news media on April 22. 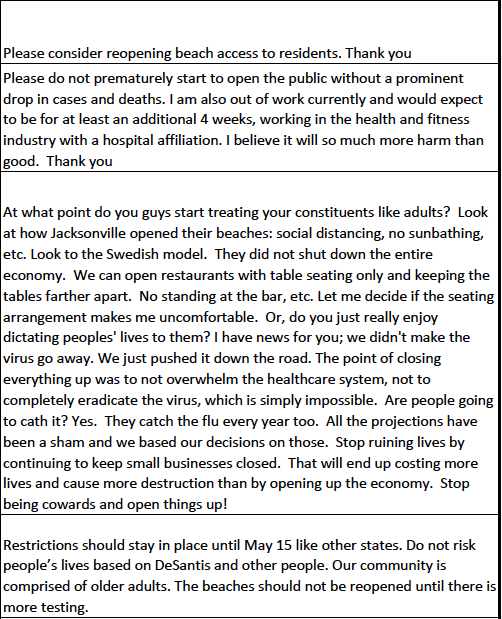 Additionally, the Siesta Key Association (SKA) sent an email to the commissioners on April 21, asking them to keep the beach restrictions in place. Referring to federal guidelines for “phased comeback,” President Catherine Luckner noted, “Without having met the criteria for absence of new cases (with testing ongoing) within a 14 day period, the [SKA] Board of Directors could not support reopening the public beach at this time [emphasis in the email].”