First the Sarasota City Commission voted 3-2 on July 16 to approve one option for ballot language reflecting the success of a citizen-initiated petition drive to change the city’s elections from a spring schedule to an August and November schedule.

Then, after City Attorney Robert Fournier had an opportunity to talk with representatives of Decide the Date Sarasota, which spearheaded the petition drive starting in December 2017, Fournier advised the commissioners that they could face a lawsuit if they did not reverse their decision.

The problem, he explained — almost exactly two hours after the board began its initial public hearing on the issue — was that the ballot language the commissioners approved did not include the primary reason behind the proposed change in the timing of the city elections.

If the commission left the language about federal, state and county election timing out of the ballot summary, Fournier said, “arguably, you’re opening yourselves up” to an allegation that the chief purpose of the amendment is not in that summary.

If the City Commission did not reverse its vote taken earlier in the evening, he continued, it could face the necessity of holding an emergency meeting. The ballot summary has to be finalized by Aug. 4, he added, and the commission is not scheduled to meet again until Aug. 20. “A court doesn’t have the authority to rewrite the language.”

Acting on his advice, the board members took another series of votes, ultimately approving an option Decide the Date Sarasota supported. That vote also was 3-2.

On July 2, during the first reading of the ordinance on the proposed amendment to the city Charter, representatives of Decide the Date asked the commissioners to approve ballot summary Option D, which they had drafted. However, Vice Mayor Ahearn-Koch proposed a combination of language from Option D and an option she had written. That evening, Mayor Liz Alpert joined Ahearn-Koch and Commissioner Willie Shaw in approving the new proposal.

For the second reading on July 16, Fournier presented the board members the following options: 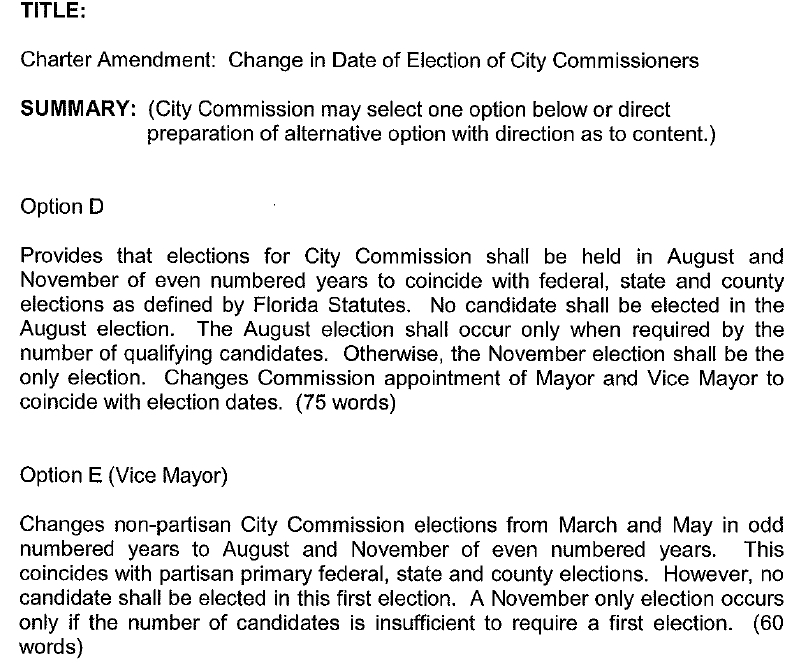 Larry Eger, the public defender for the 12thJudicial District and co-chair of Decide the Date, told the commissioners on July 16, “I prefer the language submitted by our group … [but] I believe [Option H] is acceptable.” The language in that option, he added, is “clear, correct and complete,” as required by state statute for a ballot summary.

After Eger completed his comments during the first public hearing on the issue that night, Fournier told the board members, “I think Option H does reflect the compromise language that the vice mayor wanted,” even though it has more words.

“I would recommend it,” Fournier added, “because it’s arguably more informative.”

Commissioner Hagen Brody agreed. The only qualm he had had when the board voted on July 2, he said, was the fact that Ahearn-Koch’s proposal did not include the section about federal, state and county elections being held at the same time.

However, Commissioner Shelli Freeland Eddie said she found parts of Option H to be redundant, including the line saying that the election in November would be the only election if too few candidates qualified for an August election to be necessary.

After Ahearn-Koch closed the public hearing, Brody made a motion to approve Option H. Alpert seconded it, but the motion failed 2-3, with only those two commissioners voting for it.

Then Freeland Eddie made a motion to approve Option D. Commissioner Willie Shaw seconded it.

That motion failed 1-4, with only Freeland Eddie supporting it.

Fournier told the commissioners, “Option H, I think, is fully consistent with a motion that passed last time,” referring to Ahearn-Koch’s proposal on July 2.

Shaw then made a motion to approve Option G, and Ahearn-Koch seconded it. “This is obviously the combination that we had voted on at the last meeting,” she said. “This is what I intended.”

“This is getting so complicated,” Brody responded. “I think it’s insane that we don’t give any deference,” he added, to the Decide the Date request for approval of Option H. “To me,” he told Ahearn-Koch, “it looks like you’re trying to throw sand in this machine.”

He stressed that Option H was the will of the city voters who signed the Decide the Date petitions.

Then Freeland Eddie pointed out that the Decide the Date group sought approval of Option D, and that was what she had sought with her earlier motion.

Finally, however, Freeland Eddie said she would support Option G. Otherwise, she added, “We’ll be here all night parsing words …”

The motion passed 3-2, with Alpert and Brody voting “No.”

The second time around

After the conclusion of the other hearings scheduled for the evening agenda, Fournier brought up his discussions with the Decide the Date representatives regarding the potential legal challenge if Option G ended up being the ballot summary.

If the commissioners wished to eliminate the threat of losing in court and having to hold an emergency meeting before Aug. 4, he recommended they take specific steps: Reopen the public hearing; approve a motion to reconsider Option G; deny the motion to approve Option G; and then approve Option H.

Brody pointed out that the petitioners were requesting approval of Option H that night, so he hoped Freeland Eddie would “give them the deference that I think they deserve.”

“I have been a proponent of what they proposed from Day 1,” she said. “So let’s not parse words …” Option D should have been approved, she added. “I resent the fact that you’re making it seem, Commissioner Brody, like I’m the only one that’s stalling the process.”

Then Ahearn-Koch asked Fournier whether federal, state and county elections always are held at the same time. Should Option H be tweaked further to include an “and/or,” she asked.

“I wouldn’t overthink it,” he replied. “I would urge us not to talk about any more changes.”

Kevin Cooper, president and CEO of the Greater Sarasota Chamber of Commerce and treasurer for Decide the Date, pointed out that Decide the Date members “pulled language” from the Florida Statutes when they crafted Option D. That is why it included the clause about federal, state and county elections.

Christine Robinson, executive director of the Argus Foundation, elaborated on that, explaining that not only the statutes, but also case law and a Florida Supreme Court decision, underscore, as the court put it, that one “cannot hide the ball” in a ballot summary. The intent must be clear, she added. “The burden cannot be shifted to the voter to understand what August and November elections are,” she said of the language in Option G.

Michael Barfield, president of the American Civil Liberties Union of Florida, noted the Supreme Court case Robinson had mentioned. “Clear and unambiguous language,” he said, is the goal of a ballot summary. “The process, in my view, got a little derailed in the last [City Commission] hearing.”

Finally, Brody made the motion to reconsider Option G, and Alpert seconded it. It passed 4-1, with Shaw opposing it.

Freeland Eddie then made the motion to deny approval of Option G, and Brody seconded it. That motion passed 3-2, with Ahearn-Koch and Shaw voting “No.”

Freeland Eddie made the third motion Fournier had recommended — to approve Option H. Brody seconded it. With Alpert’s support, it passed 3-2. Again, Ahearn-Koch and Shaw voted “No.”

During the first public hearing that evening, the board members unanimously approved the ordinance that formally will place the issue on the Nov. 6 General Election ballot.

When Eger of Decide the Date addressed the commissioners, he pointed out that more than 4,700 city voters signed the organization’s petitions. He characterized that as “no small feat; nor should it be.”

Eger added, “It’s hard to get that many people to agree on anything.”

“Representative democracy is dependent upon broad participation in government,” Eger said, “which we clearly and disappointingly lack in the city,” given the current March and May election cycle.