Because language was crafted before vote on first reading, city attorney says, the public will be able to offer comments at second reading on July 16

On a split vote this week, the Sarasota City Commission approved ballot language composed at the dais to put before voters on Nov. 6 in a referendum on changes in the timing of the city elections.

As a result, during the second reading of the ballot summary — set for July 16 — members of the public will be able to address the issue.

If the decision on the ballot language had been unanimous, City Attorney Robert Fournier pointed out on July 2, then the board could have taken its vote on the second reading as part of its Consent Agenda of routine business items on July 16.

By consensus on July 2, the commissioners did concur that the newly proposed ballot language will be considered during their evening session on July 16.

On a separate July 2 vote, the board unanimously approved the first reading of a draft ordinance that would implement the election timing changes, if voters approve them this fall.

The commissioners’ debate on the ballot language came during their second public hearing on the bipartisan Decide the Date Sarasota initiative. That months-long petition drive won enough voter signatures to put the referendum on the Nov. 6 ballot. Decide the Date has focused on allowing city voters to choose whether to move the city elections from March and May of odd-numbered years to August and November of even-numbered years.

Decide the Date Co-Chairs Suzanne Atwell — a former Sarasota mayor — and Larry Eger, the public defender for the 12th Judicial Circuit — and their supporters have presented data to show that voter turnout is higher in November than in the spring. They also have cited statistics showing that more Hispanics and African-Americans — and more young people — participate in the November elections than in the spring elections the city traditionally has held.

After almost 40 minutes of public comments and commission discussion on July 2, the board voted 3-2 to approve ballot language that Vice Mayor Jen Ahearn-Koch proposed. It incorporated text from an option she had suggested into an option the Decide the Date Sarasota organization had offered for consideration.

Ahearn-Koch’s language, as The Sarasota News Leaderunderstood it, would be as follows: “Changes the City Commission elections from March and May in odd numbered years to August and November of even numbered years. No candidate shall be elected in the August election. The August election shall occur only when required by the number of qualifying candidates. Otherwise, the November election shall be the only election. Changes Commission appointment of Mayor and Vice Mayor to coincide with election dates.”

After Ahearn-Koch made a motion to approve that language, Commissioner Willie Shaw seconded it.

Commissioner Shelli Freeland Eddie protested. “I do think that it’s inappropriate that there’s new language being voted on.” She added, “I just don’t agree with the process.”
Commissioner Hagen Brody told his colleagues, “Ultimately, I think Option D [proposed by Decide the Date Sarasota] is the best.” He also pointed out, “I think that we should give some deference to the petitioners.”

However, Ahearn-Koch argued that the word “changes” needed to be part of the ballot language. “That is my prime concern.”

Mayor Liz Alpert agreed. “I think you would have a number of voters,” Alpert said, “who aren’t aware that city elections are in March and May.” Therefore, she said, they would not understand that they were being asked to make a change in the election timing. “The chief purpose of this amendment,” she pointed out, is the change.

If the voters were not being asked to make a change, Freeland Eddie countered, “then [the proposed City Charter amendment] wouldn’t be on the ballot … I think this is a little bit disingenuous …”

Freeland Eddie also argued that the ballot language needed to contain reference to the change in the timing of the appointments for mayor and vice mayor, because the amendment — if approved — would modify the City Charter.

However, City Attorney Fournier explained that the language regarding the change in timing for those appointments is contained in the proposed ordinance, which would go into effect if voters approve the referendum on Nov. 6. Thus, he said, he believed it would be all right to remove the section about those appointments from the ballot language, if that was necessary for the proposed text to conform to the state requirement of a 75-word limit.

During their regular meeting on June 18, the commissioners voted 3-2 to place the Change the Date referendum on the Nov. 6 ballot. They also split 3-2 in agreeing to an option that would extend their terms by 18 months as part of the implementation of the measure, if voters approve it.

In both cases, Vice Mayor Ahearn-Koch and Commissioner Shaw were in the minority.

However, the board members were unable to agree that evening on the ballot language. City Attorney Fournier told them he would refer to comments they had made in drawing up options for them to review on their July 2 agenda. 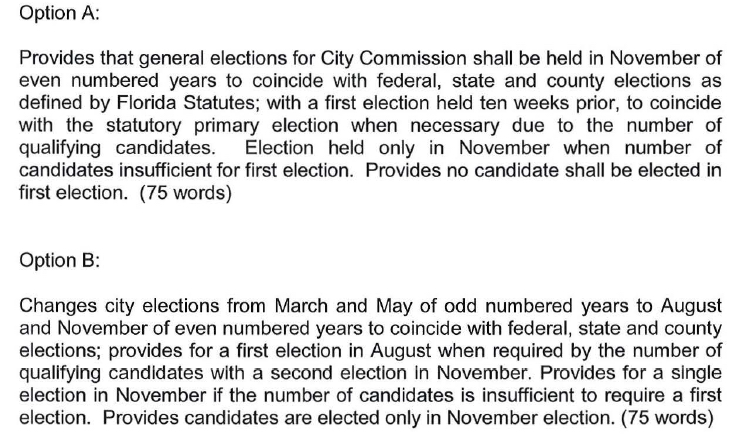 At the outset of the public hearing this week, he explained that the ballot summary of the proposed ordinance should be objective. He had provided the commissioners Options A through F, he continued, noting that Ahearn-Koch had proposed the latter two.

Former Sarasota County Commissioner Christine Robinson, executive director of the Argus Foundation in Sarasota and a member of the Decide the Date group, had asked whether he would consider a ballot summary the petitioners had crafted, Fournier added. “I said, ‘Certainly.’ That is what the public hearing is for.”

That summary is Option D, he said.

“Actually,” Fournier added, “I think they did a good job with that. I think that one deserves serious consideration. It’s very straightforward.”

In addressing Ahearn-Koch’s proposals, he told the commissioners, “I do think there’s a problematic aspect to those because of the references to partisan and nonpartisan elections.”

That afternoon, he noted, the Decide the Date group had sent a letter to the city, protesting those two options for that reason.

Finally, Fournier pointed out that the board would be voting that night on the proposed ordinance that would implement the changes in the election dates, if the referendum passes. “A vote in favor of adopting the ordinance is not the equivalent of endorsing the amendment,” he stressed. In his view, he added, the guidelines of the City Charter necessitated a vote in favor of the ordinance, since Change the Date Sarasota won more than enough signatures on petitions to place the measure on the ballot.

The six members of the public who appeared before the commissioners on July 2 to address the ballot language urged them not to include any mention of “partisan” or “nonpartisan.”

Kevin Cooper, president and CEO of the Greater Sarasota Chamber of Commerce — and treasurer of Decide the Date — pointed to the Florida Statutes in stressing that numerous races on August and November ballots are nonpartisan. “So injecting that piece into [the Decide the Date ballot language] simply is inadequate for a number of reasons.”

“I don’t think the vice mayor erred in a certain sense purposely,” he continued. Nevertheless, her options, he said do not “follow a line of accuracy.”

Then Cooper told the commissioners, “I’ve never been involved with any conversations … that involve our desire to change the nature of … politics in the City of Sarasota.” He emphasized, “A broader, more diverse, more healthy engaged electorate is better for everyone, and that is not partisan.”

“I never have seen a more bipartisan approach of people who have disagreements about a variety of things,” Michael Barfield of Sarasota, chair of the Florida Chapter of the American Civil Liberties Union (ACLU), said of the Decide the Date organization members.

Atwell, the Decide the Date co-chair, noted that the 4,732 city voters who signed the petitions “want fair language that is not tainted.”

Following the remarks, Ahearn-Koch acknowledged that including any reference to partisan elections in the ballot language would make the summary unclear.

One speaker did reference City Attorney Fournier’s earlier remarks about the City Charter guidelines necessitating the commissioners approve the ordinance that would implement the changes if the referendum passes.

“What is important is that you put your personal feelings to one side,” Martin Hyde told the board members. “Four thousand-odd people took the trouble to sign something to say they wanted the opportunity to look into [a change in the timing of the elections].”

He added, “What we are talking about here is a City Commission that is in massive dysfunction.”

Hyde noted the debate the board members conducted that afternoon over allowing City Auditor and Clerk Pamela Nadalini and Deputy City Attorney Michael Connolly to proceed with negotiating the city’s purchase of a structure for relocation of the Central Records Division from a constantly leaking facility on 12thStreet. (See the related story in this issue.) “Really, it was embarrassing,” Hyde said.

To prevent future displays of “nonsense,” he added, “Let’s have some democracy in Sarasota for a change.”