“I was on the road all the time,” he said. “I literally went to almost every [rowing] event” in the United States.

That’s when he and others at Benderson realized the country had no venue that could match the specifications required by FISA, the international rowing federation, for Olympic, world or other major events.

That’s also when the company began working in earnest to raise the necessary funds and begin planning for a 2,000-meter course that would make any event possible at Benderson Lake, just off University Parkway.

In 2017, Benderson representatives hope to host the first World Rowing Championships in the United States since the 1990s, Blackketter said on Aug. 10 — and the venue will be far superior, if all goes as planned, to the one where that event was held all those years ago.

Blackketter spoke to members of the news media during a tour on Aug. 10 that included a close-up look at the 125-ton, 150-foot dredge brought in on eight, 18-wheelers and assembled on the site over a period of about three weeks.

As the tour group stood on the deck, the dredge began digging the lake down to the 3.5-meter depth deemed necessary by FISA for international-level events.

Owned by Dredge America of Kansas City, Mo., the dredge — named Eagle One — is brand new, Project Superintendent Jared Boland explained. “It can dig up to 40 feet a day,” he added.

Asked how long it will take to complete the 2,000-meter course, Boland said, “We’re hoping to have it done probably in about three months.”

The initial crew would be working 12 hours a day, seven days a week, Boland said. Soon, he said, “We’ll ramp up to 24 hours a day.”

That will necessitate employing an additional four crew members, so the employees can work in shifts, he said.

The dredge can average more than 5,000 yards a day, he added.

Benderson’s plans call for the initial phase of the rowing venue to be completed by February 2013. The Sarasota County Commission has allocated $19.5 million in tourist development tax revenue to the project, while Benderson is working to raise another $20 million through a nonprofit foundation to enhance the facilities.

Benderson received $5 million from the state earlier this year to assist with the project.

As the dredge scooped out the lake bottom, the spoils snaked through a pipeline across the water to what Blackketter called “the crater,” the area where the Regatta Island will be constructed. That’s where the viewing stands, scoreboards, parking and other facilities will be located.

On the bridge of the dredge, Boland pointed to a computer screen showing gauges. “It’s so automated,” he said of the operation. The gauges tell the crew members everything they need to know, he added.

Another screen records all the data of the operation, Boland said.

Additionally, seven cameras on board record all the critical facets of the work.

When the project is finished, Blackketter explained, Benderson Lake will be the only Class A FISA course in North America. “They’re lining up, so to speak,” he added, referring to organizers of major rowing competitions.

Benderson representatives have been working with Svetla Otzetova, the chief FISA architect, who designs all the rowing courses used in the Olympics, Blackketter said. FISA officials “actually designed this lake to meet all their specs,” he added.

Blackketter was scheduled to talk with Otzetova in Bulgaria on Aug. 12, he said, “and get the final sign-off on the plans — all designs and specs.”

‘It’s just going to be awesome” when it’s completed, Blackketter said of the facility, which will feature not just the rowing venue but pedestrian/bike trails, picnic areas and volleyball courts. The park is open to the public at all times, he pointed out, as the tour group members watched two men sititing on a dock, fishing under the late-morning sun.

The goal is to host canoe and kayak competitions, dragon boat races and even triathlons, he said. In fact, Benderson Park will host its first major international triathlon in March 2013, he added.

Rowing will account for only 50% of the planned activities, Blackketter said.

Below is a Sarasota County rendering of the part of the venue’s amenities: 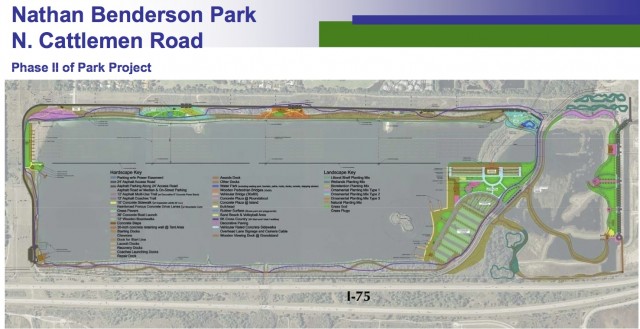