Siesta Key Chamber of Commerce President Mark Smith has volunteered his expertise as an architect in an effort to keep the planned Siesta Public Beach improvements as a high priority for the Sarasota County Commission, he told members of the Siesta Key Association during their regular meeting on Aug. 2.

His work, he explained, would be a collaboration with other organizations on the island, including the SKA, the Siesta Key Village Association and the Siesta Key Condominium Council.

This spring, all those groups sent letters to the County Commission, asking the board to keep the beach improvements on a fast track.

Smith pointed out that the estimated cost of the improvements had ballooned over the years. “I fear that we will lose the project altogether,” he said.

A staff presentation to the County Commission on Dec. 7, 2011 estimated the project cost at $21.5 million, with completion in 2024. At the same time, staff presented a three-phase alternative plan that could be completed in the fall of 2014, if the commission chose to borrow funds to accelerate the work.

Commissioner Joe Barbetta has stressed the need to move ahead with the improvements as soon as possible, while both construction costs and interest rates remain down.

However, Commissioner Nora Patterson, who lives on the key, has told island groups that while she also would like to see the project completed sooner than the 2024 fiscal year, she was concerned about funding it. The county is facing another major expense in replacing the 800MHz emergency radio system used by the Fire Department and the Sheriff’s Office, she has pointed out.

Both projects, Smith told the SKA audience, are slated to be funded through surtax revenue.

“So I had offered to review [the beach park plan] as an architect in my real job,” Smith said.

After he examines it and feels he can offer some suggestions about where costs might be pared, he added, he would discuss his findings with representatives of the other organizations.

Smith said he was hopeful the groups, as Siesta stakeholders, could reach a consensus on changes they felt could be made “if the budget had to be reduced.”

Coincidentally, Smith said, he had met the project’s architect the previous week during a convention. “I told him that once I got the numbers [for specific aspects of the project] from Sarasota County, I would sit with him” and discuss the plan, Smith added.

While he said he was hopeful he would receive some detailed information from county staff within the next couple of weeks, Curtis Smith, the project manager, told The Sarasota News Leader last week that the design work is at the 60% mark. It is still undergoing “a round of internal review,” he added.

Mark Smith needs more details than staff can provide him at this point, Curtis Smith said, adding that the design should be at the 90% mark in September.

He added, “That might get pushed back to October,” but he was hopeful the timeline would not have to be revised.

“By the time we get to 90%, we’ll have much better information on the architectural side of things,” he said.

At the 60% mark, he said, most of the details ironed out involve the civil engineering aspects of the project.

At the conclusion of Mark Smith’s remarks on Aug. 2, SKA President Catherine Luckner, referring to the stakeholder groups, said, “We’ve been doing pretty well, speaking with a unified voice on things.”

She anticipated that to continue with the work on the beach plan, she added.

The following rendering shows a revised phasing plan that would see the project concluded in the fall of 2014: 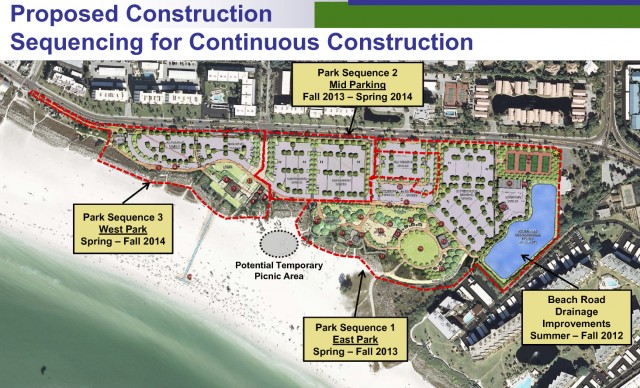