Chuck Henry, the director of Sarasota County’s Health and Human Services Department is the point person for local leaders as they contend with the 2019 novel coronavirus, Sarasota City Manager Tom Barwin told the city commissioners this week.

Nonetheless, in regard to public communications, G. Steve Huard, public information officer for the Florida Department of Health in Sarasota County — which also operates under Henry’s direction — told The Sarasota News Leader that staff members there are “pretty much restricted on what we can say.”

Huard added during a March 4 telephone interview that as presumptive cases of the coronavirus “present,” state health officials will be “updating the [Florida Department of Health] website with numbers.” The U.S. Centers for Disease Control and Prevention (CDC) is providing updates daily around noon, Huard noted.

He had been begging state health officials to release Florida updates at a set time each day, Huard said, in an effort to help the news media offer accurate reports and to help members of the public keep track of the Florida spread of the coronavirus, which is classified as COVID-19.

When the News Leader checked early in the evening of March 3, the state Health Department website listed two Florida cases that had been confirmed and one “presumptive positive” in another jurisdiction involving a Florida resident. The number of pending test results was 16; and the number of negative testing results was 24. A final box on the website said 247 people were “under public health monitoring.”

As of 6:43 p.m. on March 4 — after the News Leader’s earlier check — the website had been updated to show still that only two Florida cases had been confirmed. The information box added that five confirmed cases involved Florida residents who had been isolated out of state, and one presumptive positive had yet to be confirmed.

The number of pending test results had climbed to 38. 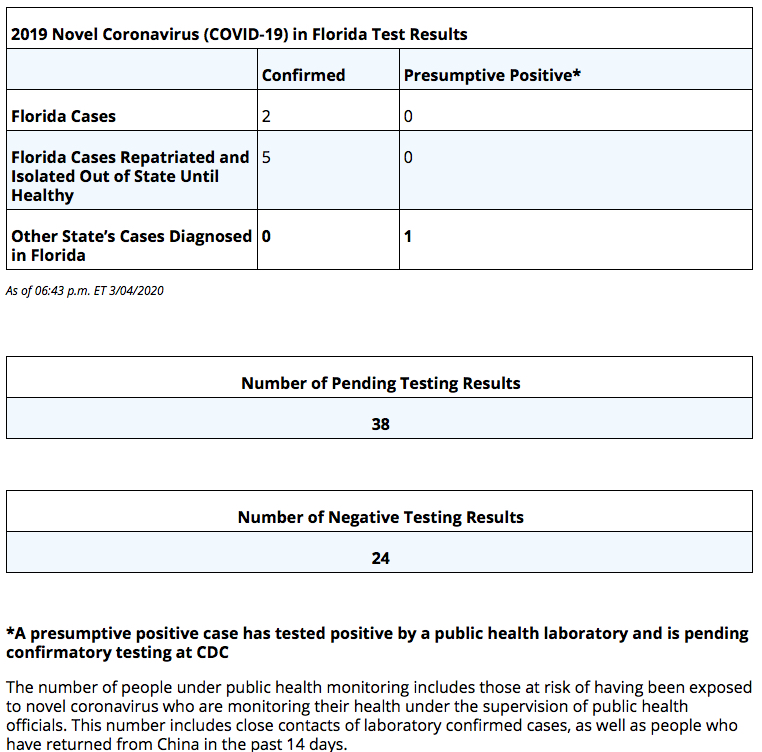 While City Manager Barwin had the opportunity of a regular meeting to provide the city board a verbal update, County Administrator Jonathan Lewis notified the county commissioners in a March 2 email that it was his understanding that the two presumptive positive cases noted in a March 1 news release from the Florida Department of Health had been confirmed.

The County Commission’s next regular meeting is set for March 10 in Venice.

“The first patient is an adult Manatee [C]ounty resident without travel history to countries identified for restricted travel by the CDC,” the Florida Health Department news release explained. “This person did seek health care, is isolated and will continue to remain isolated until cleared by public health officials. The Florida Department of Health is working closely with the patient, their close contacts and health care provider to isolate and monitor persons who may have been exposed to COVID-19 and implement testing of anyone who may develop COVID-19 symptoms, including fever, cough, or shortness of breath,” the news release added.

“The second patient is an adult resident of Hillsborough [C]ounty with a history of travel to Italy. This person is isolated and will continue to remain isolated until cleared by public health officials,” the release pointed out.

During the March 2 City Commission meeting, Barwin also talked of the March 1 spread of news on social media about a COVID-19 case at Doctors Hospital in Sarasota. Based on later hospital accounts, that patient is the Manatee County resident referenced in the Florida Health Department news release.

“We were hearing the rumors and saw the letter floating around,” Barwin said, referring to a copy of an announcement to hospital staff that appeared to be on the hospital’s letterhead. The News Leader staff first saw it posted on Facebook late on the afternoon of March 1.

That letter said the CDC had notified Doctors Hospital of a patient in the hospital “who presumptively tested positive for COVID-19.”

“The interesting thing about this [Manatee County] patient,” Barwin told the city commissioners, “Is that they don’t know the origin [of the infection].”

Further, Barwin said, “We have made a strong suggestion up the chain,” that communication is necessary to ensure accurate information reaches the public.

Sarasota County staff, he added, “is looking at stepping up the communications” with the public information officers of all the governmental agencies in the county. “We’ll continue to brief you personally,” he told the commissioners.

In response to questions about the Doctors Hospital letter, Huard explained to the News Leader the complex process in effect at the time for testing samples from patients suspected of having contracted COVID-19. “This is all very new,” he emphasized of the situation.

Samples had to go to the CDC to begin with, for testing, he continued. Then Florida health officials finally received three test kits for labs. The public was expecting those state labs to confirm cases, Huard said. That was not the case.

As he understood the process, he continued, each lab would run a sample three times. If all indications were that the sample was positive, then it was sent to the CDC. “All that takes time.”

Until the CDC confirms that a patient has COVID-19, Huard added, “We can’t say anything definite. … In the meantime, the community’s freaking out.”

However, he stressed, the goal was to ensure that the state testing did not result in a “false positive.”

The spread of the virus has ramped up in just the past six to eight weeks, he pointed out, after appearing first in China. “We’re just figuring this out,” Huard added of the process to ensure test results are accurate before information is released to the public. “I think within the … coming days we’ll see that gel out really well.”

Those were not presumptive cases, Barwin explained. According to the information he had received, Barwin continued, “Both of the people are OK.” Apparently, one of them — the mother of a student — is a nurse at Doctors Hospital “who had [contact] with the [Manatee County] patient.”

The other person is her child, Barwin added. Both are in self-isolation for 14 days to prevent any potential spread of COVID-19, he noted. “This is the kind of response that’s necessary.”

“Two weeks ago, the Academy made the proactive decision to deep-clean and sanitize the campus, including all light switches and door knobs. After news of potential contacts [were] announced, the Academy staff sanitized classrooms and [buses] in addition to standard recommended cleaning and sanitizing procedures.”

“‘Our priority is the health and safety of our cadets and staff, and in addition to sanitizing surfaces throughout our campuses, we are reiterating to our staff and cadets the importance of washing hands, sneezing into the bend of elbows, not touching faces and of course, staying home and telling someone if they aren’t feeling well,’” said Bowman in the release.

“In accordance with the Florida Department of Health protocols,” the release continued, “SMA is following all guidelines. According to the protocol, there is no current recommendation for excluding any additional cadets or school closure at this time.”

During the City Commission meeting this week, Barwin explained, “The virus can be communicated through coughs and sneezing and airborne moisture within a 6-foot range.”

The best Florida Department of Health recommendation for prevention, he continued, is “lots of hand washing. Twenty seconds of hot water and soap.”

The next best measure is use of hand sanitizers, he said.

“Do not buy masks,” Deputy City Manager Marlon Brown added. “They do not help.”

“The CDC does not recommend that asymptomatic, healthy people wear a facemask to protect themselves from respiratory diseases, including COVID-19,” the state Health Department news release points out. “Facemasks should be used by people who show symptoms of COVID-19 to help prevent the spread of the disease to others. The use of facemasks is also crucial for health workers and people who are taking care of someone in close settings (at home or in a health care facility).”

The Florida Department of Health news release further explains, “COVID-19 can spread from person to person through small droplets from the nose or mouth, including when an individual coughs or sneezes. These droplets may land on objects and surfaces. Other people may contract COVID-19 by touching these objects or surfaces, then touching their eyes, nose or mouth.

“Symptoms of COVID-19 are fever, cough and shortness of breath. Symptoms may appear in as few as two days or as many as 14 days following exposure. Most people recover from the COVID-19 without needing special treatment. The elderly and those with underlying medical problems like high blood pressure, heart problems and diabetes, are more likely to develop serious illness.”

As no vaccine exists to prevent COVID-19, the release adds, “The best way to prevent illness is to avoid being exposed to this virus.” The Department recommends everyday preventive actions to help impede the spread of respiratory diseases, the release notes, including the following:

The release encourages the public to visit the department’s dedicated COVID-19 webpage at www.FloridaHealth.gov/COVID-19.

For any other questions related to COVID-19 in Florida, the public may contact the department’s dedicated COVID-19 Call Center at 1-866-779-6121 or by emailing COVID-19@flhealth.gov. The Call Center is available Monday through Friday from 8 a.m. to 5 p.m., the release says

The CDC also has a website with information related to COVID-19: https://www.cdc.gov/coronavirus/2019-ncov/index.html.