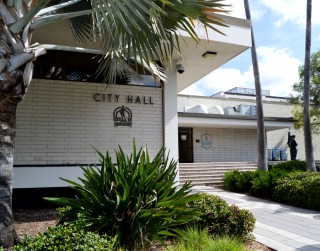 With a tip of my hat to the late, but never forgotten, Bob Ardren, I’d like to start an occasional column about some of the ins-and-outs in city government. Bob’s old column, “Muttered on Main,” was a must-read for those who loved downtown. It’s a high bar to which to aspire, but the happenings at 1565 First St. impact us all.

In the really old days (for me) of the late 1970s, there was a press table in the City Commission’s chambers. Instead of balancing a notepad on your knee, you had enough surface not only to write but to spread out papers to follow the issue de jour.  There also was a “multi-box” on the table so radio reporters could plug in and get live sound bytes.

When the chambers were redesigned, the press table was abolished. Instead of having their own table, reporters were moved to the back row, stage left. Each chair in the row got its own “mult-box,” providing not only audio connections but 110-volt power and ethernet connection to the Internet. The chairs have a flip-up table useful for people with a waistline less than 25 inches.

But we’re in the 21st century now, and ethernet is so passé. Some laptops don’t have a jack for it, it’s so outdated. Therefore, it’s cruel to find no public Wi-Fi in the Sarasota City Commission Chambers.

The situation was especially galling at the first budget session on July 6, when Finance Director Chris Lyons was putting up slide after slide with type so small it was a blur. When I asked for a handout, I was told by the city’s PR rep that, “It’s all on the Web.”

Except in the City Commission chambers, because there is no way to get on the Web without either an ethernet cable or a password to one of the “private” Wi-Fi networks that are live in the building.

If I was in Starbucks, or just about any bar in town, I could get on the Web with Wi-Fi. But not at City Hall.

So it is with pleasure I announce that the city IT department is actually considering – yes thinking about – installing public Wi-Fi in chambers, so citizens could monitor the same information the commissioners see. In real time. Imagine that.

We can only hope this installation experience does not match Bob Ardren’s coverage of the time Sarasota County said it would install Wi-Fi throughout downtown. That was a long-running comedy of errors.

Ghosts in the Capricorn II

An inevitable part of this column will be the collision between what was and what is coming. The Sarasota we knew once, and the continuing Sarasota evolution.

Perhaps no better example is a property at 890 Central Ave. Back in “the day,” it was the Capricorn II Lounge and Restaurant. Across the street from the Rosemary District graveyard, it was the only place in town where white and black people could mingle, socialize, eat, dance and listen to music. Alas, there’s no place in town like that anymore.

Maybe it got a little rowdy at times, but no more than the lilly-white Broadway Bar’s back parking lot. However, a coalition of forces – I never understood it then – became organized in the name of killing the Capricorn II. The building was turned — how ironic — into a seldom-used police substation.

I know of no other town in the United States that lacks a bar, or roadhouse, or restaurant or dance hall where people can go, listen to music, have a beer and maybe even ask a pretty girl to dance. “Who killed the Capricorn” is ancient history now. The Sarasota evolution moves on.

On July 5, the Development Review Committee was asked to pass judgment on a new use for the site. The Salvation Army wants to use the city-owned property as a daytime shelter for clients. The Resurrection House is interested in it for the same reason.

Bryan Pope, general manager of Sarasota’s Salvation Army, said the building would be used to cover the gap between the 5:30 a.m. end of breakfast at his facility and the 8:30 a.m. opening of Resurrection House, which serves as a daytime shelter. Some of the office space could be used for management and counseling by the “Street Teams” — the city/Salvation Army-organized groups working for Public Works. There would be no overnight lodging, and Pope said 7 p.m. would mark the absolute end of daily activity on the site.

But if you did stay inside past 7 p.m., I wonder if you’d hear the faint clink of cutlery, basso laughs and jazz riffs and high-pealed laughter from the walls that know too much. On Aug. 8, Pope’s request goes before the Sarasota Planning Commission.

Everybody’s gotta have one

An economic development director, that is. The guy you send to conventions to tout Sarasota’s mystique. Financial gymnast, bubbly marketeer, a Santa with corporate welfare.

The city had one, but the guy resigned June 8. The guy, Randy Welker, said he wanted to spend more time with his wife on Florida’s east coast. “It’s a personal decision,” he told the Downtown Improvement District (DID), which covered part of his salary. By the way, that salary came from a three-way split of funding among the DID ($25,000), the Greater Sarasota Chamber of Commerce ($25,000) and the City of Sarasota ($40,000).

So now the troika is looking for a new guy. “The job description doesn’t need to change totally,” said the Chamber’s Steve Queior. “But he does need familiarity with grant funding.”

Welker was given a pair of assignments: Get a hotel for downtown, and get a modern drug mart. The hotel’s a done deal, with Floridays bringing a boutique 180-roomer — all eight stories of it — to Palm and Cocoanut. And CVS has been noodling about the city’s State Street property. However, the latter prospect is up in the air, with a parking garage deal slowly going sour with the Pineapple Square developers.

The new guy “needs to be a marketing person, instead of ‘it’s your job to get a hotel or a pharmacy,’” said Deputy City Manager Marlon Brown.

“With a new and better defined role, [the job] will be easier to sell to my commission,” said Brown.

Queior chimed in with the possibility of more money for the position from the Chamber. The DID has voted unanimously to move forward with a three-year commitment for a new guy.

One issue that will be thrust on the new guy is downtown density. An emeritus professor of urban planning from the University of Cincinnati told the DID that Sarasota’s downtown density is 3,400 people per square mile.

“But downtown St. Petersburg is 5,300,” said Roger Barry, the professor. He noted downtown Sarasota has grown 11% in the past decade.