Following close to an hour of discussion on Oct. 21, the Sarasota County commissioners voted unanimously to authorize the hiring of a consulting firm to assist staff with planning for a 200-bed secured correctional facility for persons suffering with mental health and drug addiction problems.

The center would be constructed on the site of the county’s Central Energy Plant, near the intersection of East Avenue and Main Street in downtown Sarasota. That site is adjacent to the three wings of the county jail.

(A new cooling plant is being constructed on the surface of the county parking lot located at the intersection of Ringling Boulevard and School Avenue in downtown Sarasota.)

Chuck Henry, director of the county’s Health and Human Services Department, noted that staff is calling the project the Correctional Reintegration Center; it would be operated by the Sheriff’s Office.

In making the motion for staff to proceed with the planning, Commissioner Charles Hines talked of his general disdain for paying for consultants. Yet, in this situation, he pointed out, staff does not have the expertise to handle the work.

Further, Hines said, over the past decade, “There’s been a significant shift” in county residents’ feelings about treating persons who have been arrested for actions that resulted from drug abuse and mental health problems. Such individuals should not be confined to the jail, Hines added, because they would benefit from specialized treatment. “This is the way our county needs to go. … [Sheriff Tom Knight] is a very big advocate for this,” as well, Hines noted.

Brad Gaubatz, who manages capital projects for the county, explained that a consultant would be able to offer recommendations on the exact size of the facility, including the number of pods it should contain, to maximize efficiency.

Henry said the zoning of the downtown site would allow for a 10-story structure. Sheriff’s Office leaders, he added, had asked county staff to consider building the 10 stories allowed, “perhaps shelled-out” to accommodate future expansion of services within the center.

Gaubatz and Sheriff Tom Knight both pointed to the cost savings of building the facility next to the jail wings, as that would save on expenses for food service, medical care, laundry and general staffing for the Sheriff’s Office’s Corrections Division.

Knight emphasized the importance of those fiscal considerations, noting that duplication of Corrections Division services would be necessary if the new center were in a location well removed from the jail. That would raise the Sheriff’s Office’s budget in the years ahead, he added.

Chair Michael Moran also noted that the consultant would be able to assist with the legal requirements of a correctional facility, in terms of separating male inmates from female inmates and juveniles from adults, for examples.

Knight also voiced his desire to have the center accredited, as other Sheriff’s Office operations are.

Further, Henry said, the Sarasota City Commission would have to approve the facility.

Henry pointed out that no funding yet has been identified for the project. He indicated that, given the Sarasota County Charter cap on the amount of bonds that can be issued without voter approval, a referendum might be necessary in the future to pay for the center.

The Office of Financial Management told The Sarasota News Leader that the current cap is $24.4 million. 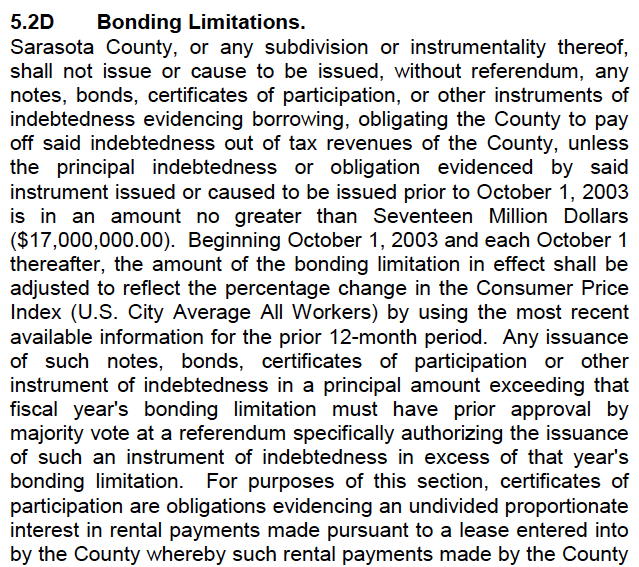 Moran reminded Henry and the other commissioners that, because of the COVID-19 public health emergency and its negative effects on the economy, the board members agreed during the summer to put off a referendum they had planned for the Nov. 3 General Election ballot. It would have asked voters to decide on the creation of a Mental Health Care Special District.

In the spring, when the commissioners were discussing plans for that referendum, they noted the potential of dedicating some of the resulting revenue to jail diversion programs.

During the Oct. 21 discussion, Commissioners Hines and Alan Maio pointed out that the board members originally expected to have to conduct a referendum to pay for the expansion of court facilities at the R.L. Anderson Administration Center in Venice. However, impact fee funds came in higher than expected, Maio noted, and staff was able to put together a funding package for that project without the necessity of a referendum.

Nonetheless, Commissioner Nancy Detert said, “It bothers me, jumping in with both feet on this, having no idea [about the cost].”

Maio said he wanted to put into the record that a new jail could cost around $150 million. The secure treatment facility would be expected to cost much less, he indicated.

Benefits of the proposed facility

Sheriff Knight also talked about the reduced recidivism rates achieved by the programs already operating in the jail to help people with addiction and mental health problems.

In February, he said, his staff identified 10 people who had been in and out of the jail, having been arrested 109 times by the Sarasota Police Department and 78 times by the Sheriff’s Office. After those individuals finally were able to get help through the special programs, he continued, “Eight of 10 have yet to be re-arrested. … That’s a pretty good recidivism rate reduction.”

For another example, Knight said, the rate of recidivism for female inmates who participated in the addiction recovery pod in the jail is 26%, based on his staff’s latest figures. For males, the rate is 37%. He called those numbers “really low,” considering the national recidivism average for inmates who have participated in drug abuse programs is “in the high 40s.”

Right now, Knight added, his staff has identified 404 individuals in the jail who are “either on medication or self-reporting mental health issues.” They would be eligible for the new treatment center, he noted.

Moreover, Knight said, no one would be released from the center until they had served their time for their conviction.

When Commissioner Christian Ziegler asked how the determination would be made that someone could benefit from being confined in the new facility instead of the jail, Knight explained that persons would be screened. “Nobody gets in there on false pretenses.”

Violent offenders would not be considered, Knight added.

The county’s Criminal Justice Commission, Knight noted, would be asked to help devise the screening process. That group comprises judges, representatives of the State Attorney’s and Public Defender’s offices, and persons who work with mental health care and substance abuse providers, he pointed out.

Getting to this point

During the presentation that kicked off the discussion, Henry of Health and Human Services reminded the commissioners about their vote in February to approve spending $2,629,234 on a three-year pilot program entailing a secured residential treatment facility on the grounds of First Step of Sarasota. (An additional, one-time expense of $651,000 was approved to remodel a First Step of Sarasota structure for that program.)

Staff anticipates a July 1, 2021 opening of the facility, Henry said. “Contracts are being put in place,” he added, and the Criminal Justice Commission had met with First Step representatives in late September to work on intake criteria and other facets of the program. “Everything seems to be on track there.”

He also talked about delays in launching an Early Case Resolution Program, for which the commission also provided funding, so it could begin as of the Oct. 1 start of the 2021 fiscal year.

“Due to COVID-19 and its impacts on our community,” Henry said, the courts were closed for months. The courts are just reopening, he continued. Therefore, Henry added, staff anticipates that program will get underway in the spring of 2021.

The $287,684 expense of that initiative allows both the State Attorney’s Office and the Public Defender’s Office of the 12th Judicial Circuit to hire an extra attorney and an extra administrative staff person. The attorneys would meet routinely to review new criminal cases to determine those that could be resolved more quickly, Wayne Applebee, a senior manager in the Health and Human Services Department, explained to the commissioners in February.

On Oct. 21, Commissioner Detert queried Henry about whether First Step was “included in the conversation” about the new 200-bed center.

Building that facility next to the jail, she said, “eliminates a lot of the type of clients you have over at First Step.” She would prefer having the center operated by that organization, she added.

Henry reminded her of the February discussion the commissioners conducted. The jail diversion programs “were first vetted” by the Criminal Justice Commission, he said, based on recommendations by a county work group. First Step was involved in that process, he added.

Henry also told her that First Step has 40 treatment beds, “and their capacity stays pretty full …” The three-year pilot program the board authorized, he noted, “will give us a lot of data,” which will help determine the number of beds in the proposed new facility next to the jail.

Chair Moran said of the plans for the new center, “I absolutely think this is an investment in the community.” The return on investment, in the form of lower recidivism rates, he added, “for any reasonable person, is obvious.”