The “bookends” of business during the Sarasota County Commission’s regular meeting on May 6 involved discussion and votes on waiving fees and streamlining a process to assist restaurants and retail stores in complying with Gov. Ron DeSantis’ Executive Order 2020-112. That order allows for no more than 25% indoor capacity in businesses reopening as the COVID-19 pandemic continues.

What began with a focus on restaurants concluded with the inclusion of retail stores in the final resolution that the board approved.

During the commission’s regular meeting on May 5, Chair Michael Moran referred to recommendations the board members had received from local business leaders, seeking county action that would facilitate the reopening of dining and retail establishments under the governor’s new guidelines. On May 6, County Administrator Jonathan Lewis provided all the commissioners a copy of a draft resolution that called for the waiving of Temporary Use Permit (TUP) fees through July 31 for businesses that wanted to erect tents, for example, and set up tables and chairs outdoors. The governor’s last Executive Order allows for outdoor diners to be separated by at least 6 feet, in accord with U.S. Centers for Disease Control and Prevention guidelines to stem the spread of the novel coronavirus.

The primary concern for county staff, Lewis explained, is ensuring that the Sarasota County Fire Department continues to have ready access to stores and restaurants.

He further noted that an administrative process already in place “really streamlines” the approval of TUPs.

If any disagreement arises about a particular request from a business under the terms of the May 6 resolution, Lewis continued, Matt Osterhoudt, director of the county’s Planning and Development Services Department, would make the final decision. “We don’t anticipate necessarily a lot of those.”

The resolution also suspends Building Permit fees and “after-the-fact fees … for improvements made as a direct result of COVID-19 to promote health, safety and welfare for businesses reopening.”

“After-the-fact fees” typically are charged of a business owner who has failed to apply for a permit before undertaking a business modification that needs county approval. After county staff learns of an unpermitted improvement, the business owner can pay the fee if staff agrees that the modification complies with county zoning regulations.

During the discussion of the initial resolution, Commissioner Nancy Detert called the plans it outlined “an innovative way of working with the business community.”

“The only thing that would bother me,” she continued, would be the erection of tents that could hamper the public’s use of sidewalks. “I’m fine with waiving fees.”

“We’re very concerned about access for the firefighters and paramedics,” Lewis replied, indicating staff would work to make certain businesses adhere to the applicable safety, health and welfare standards of operation.

“You can’t block every sidewalk and street with a table and chairs,” Detert told him.

Staff also would make certain that public traffic flow would be maintained in parking lots, Lewis pointed out. Staff was working on a document with about five bullet points, he added, that would tell business owners what they needed to know.

Commissioner Christian Ziegler pointed out that restaurants with large parking lots could make use of that extra space to serve additional people.

The options provided by the county resolution could make a return to business viable for restaurants, Ziegler added.

Then Ziegler asked what process a business owner would have to follow to get the necessary TUP.

Businesses will be able to apply online, Lewis responded, but people also will be able to get counter service from Planning and Development Services staff. The process should be a fast one, entailing little staff time, Lewis noted. That was all the more reason, he said, that he felt comfortable calling for the waiving of the fees for a short period.

For online applications, Lewis added, a person would click on a hyperlink that would take the person to the county’s COVID-19 website page, which features a “Resources” link. The form would be easy to find, Lewis pointed out.

Lewis said he expects a permit will be issued the same day an application is received.

If the commission approved the resolution, he continued, staff would send out an email blast to the business community, including the Chambers of Commerce, to alert them to the change in county policy.

Ziegler told Lewis he appreciated the fact that County Administration had moved so quickly to get the resolution drawn up for board consideration. Not only will the measures aid restaurant owners, Ziegler pointed out, but they also will be of aid to county residents. “This is helping our neighbors. …

Hopefully, we can get the communication out. I have full faith [in that].”

Commissioner Alan Maio concurred. “The [email] blast that you’re going to send out … is really critical,” Maio told Lewis, so people will know what to do.”

Detert made the motion to approve the resolution, and Ziegler seconded it.

“Part of this would include signage on the stores,” Detert noted. “I don’t want to see a conflict between the average citizen and the restaurateur when they start impeding the progress of walkers. … Public information’s going to be very important.”

The resolution won unanimous board approval

Asking for an amendment

As the commissioners were wrapping up their May 6 meeting, Ziegler brought up a concern that he said he had addressed earlier with Lewis during a break. “I got some communications” after the early action on the resolution, Ziegler explained. “It did leave out the retail. … I’d like to see the restaurants and the retail be able to expand a little bit.”

Then Lewis provided copies of a proposed amended resolution that would allow the waiving of the TUP fees for retail stores, as well.

First, the commissioners had to rescind the motion they made to approve the original resolution. Commissioner Detert offered to make that motion. However, she said, “I still have concerns that we’re going to be blocking sidewalks with wheelbarrows and chairs and tables. If we go too far,” she added, members of the public will be angry, because the result will be what she characterized as a “sidewalk traffic jam.”

County Code Enforcement staff is not going to be driving around the county, looking for opportunities to cite business owners during the pandemic, he said.

However, Hines questioned why retail businesses needed to be included in the resolution.

After Lewis explained that the governor’s last Executive Order prohibits retail businesses from exceeding 25% of their indoor customer capacity at any given time, Hines admitted that he was unaware of that provision. 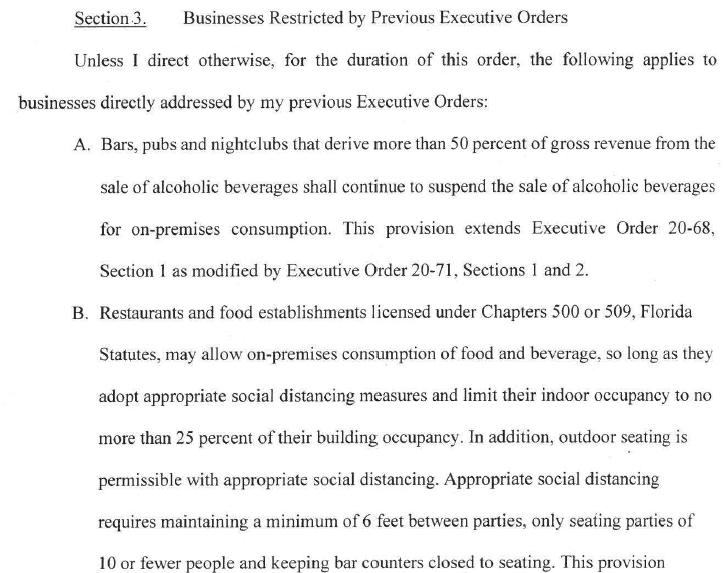 “Most of the crowding is going to come in cities,” Detert said, “[for people] walking down Venice Avenue, walking down Main Street [in Sarasota]. So cities are going to make those decisions.”

Finally, Detert made the motion to rescind the earlier motion, which approved the original resolution.

Ziegler seconded it. “I think that all we’re trying to do is help these businesses in Sarasota County,” he said. … These retail businesses are going to be struggling even with this [amended resolution] in place.”

After that motion passed, Detert then made a motion to approve the amended resolution, and she read the new portions of it.

She also stressed that business owners should be aware of the fact that the TUP fee waiver period will expire on July 31.