Thanks to a unanimous vote of the Sarasota County Commission, more of the county’s parks and natural areas have been designated dog-friendly, with certain caveats.

In approving their April 26 Consent Agenda of routine business items, the commissioners adopted a resolution that adds 15 locations where dog owners may take their pets. However, the animals must remain “leashed at all times,” a county staff memo said.

One of the “whereas” clauses in the resolution notes that making the new areas available “will contribute to the health and well being of dogs and their owners.”

The change went into effect on May 1.

The only county dog parks where the animals may “safely be off-leash in a fenced area specifically designed for such use” are the 17th Street Park, Bay Street Park, Lakeview Park, Woodmere Park and Brohard Paw Park, the memo pointed out.

The resolution listed 38 parks in North County and 40 in South County. Among them are The Legacy Trail segments, where dog owners already have been taking their pets, as The Sarasota News Leader has observed. Others in North County are Nathan Benderson Park near University Parkway; Phillippi Estate Park on South Tamiami Trail in Sarasota; Red Bug Slough, which is accessible from Beneva Road in Sarasota; and Urfer Family Park in Sarasota.

The following guidelines will be in effect in the dog-friendly areas, the county memo pointed out:

Additionally, the memo said, the following requirements are necessary as outlined in the Sarasota County Code of Ordinances: 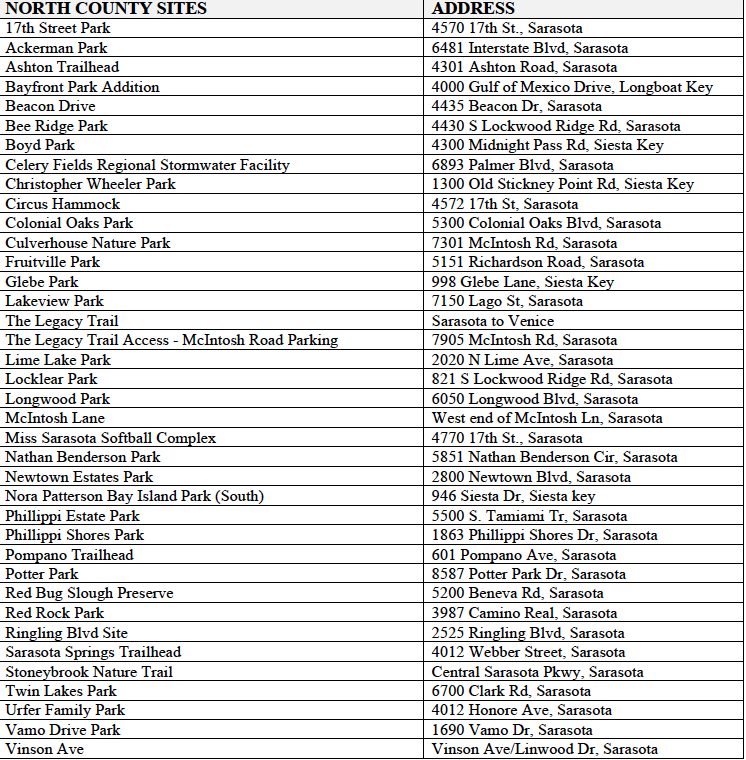 The staff memo further pointed out that, on June 21, 2016, the commissioners sitting at that time adopted the Parks, Preserves and Recreation Strategic Master Plan. Among the priorities identified in that document, the memo continued, was the need for more dog parks and dog-friendly parks.

Then, the April 26 memo said, on Dec. 13, 2016, the County Commission adopted a resolution that expanded the list of designated dog-friendly parks. “The popularity of the dog-friendly parks” and the Master Plan priority “led staff to evaluate the potential to further expand the list of sites with areas available for park visitors to bring their leashed dogs,” the memo added.