UPDATE: The following press release was received from the Florida Dept. of Health at 2:26 p.m. today:

High surf conditions may be contributing to the higher levels of bacteria detected, health officials say 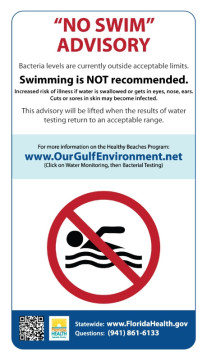 On Thursday, Oct. 29, Sarasota County health officials issued a precautionary “No Swim” advisory for Siesta Beach because of the detection of elevated levels of enterococci (enteric) bacteria, “some of which are naturally present in the environment,” Sarasota County announced.

According to the Environmental Protection Agency (EPA), a correlation exists between the levels of enteric bacteria in recreational waters and human health, a county news release points out.

“Signage advising the public not to swim or engage in water recreation at Siesta Beach will remain in place until follow-up water testing results meet the EPA’s recreational water quality standard,” the news release says. Staff with the Florida Department of Health in Sarasota County (DOH-Sarasota) expect to have the next round of test results available on Friday, Oct. 30, the release adds.

Enteric bacteria can come from a variety of natural and man-made sources, including pet waste, livestock, birds, wildlife (those that are land-dwelling as well as marine creatures), stormwater runoff, and human sewage from failed septic systems and sewage spills, the release notes.

“The rapid response team from Sarasota County has determined that the cause of the elevated bacteria levels is likely due to natural sources,” the release says, because the team observed a wrack line of decaying algae.

“Wrack lines, which contain marine algae and a variety of marine organisms that provide food for shorebirds and wildlife, act as natural bacteria reservoirs,” the release explains. “Large numbers of shore birds were also observed feeding along the water’s edge,” the release adds. “High surf conditions associated with recent tropical systems churn up sand from the bottom and can affect water quality,” it notes. Abnormally high tides and recent heavy rains in the area that wash accumulated pollutants — including bacteria from pet feces, birds and wildlife — into local waters “could also be an important factor, the release says.

DOH-Sarasota Environmental Administrator Tom Higginbotham emphasizes in the release that the Florida Healthy Beaches program protects beach-goers from conditions unsuitable for swimming by sampling beach water and providing accurate and up-to-date explanations of the results.

“When these bacteria are detected in high concentrations in recreational waters, there is a risk that some people who swallow water while swimming or have contact with water entering the skin through a cut or sore may become ill with gastrointestinal illnesses, infections or rashes.” says Higginbotham in the release.

Local health officials emphasize that beaches remain open. However, residents and visitors are urged to take precautions by not wading or swimming in the water or engaging in water recreation at Siesta Beach until the advisory is lifted. In addition, shellfish such as crabs and shrimp collected in the immediate area of Siesta Beach should not be consumed, the release points out. “However, it is safe to fish and consume fin-fish from these waters,” the release adds.

“Our coastline of over 30 miles of world-class beaches is a wonderful asset to our community,” Virginia Haley, president of Visit Sarasota County, notes in the release. “Let’s work together to help preserve this amenity.”