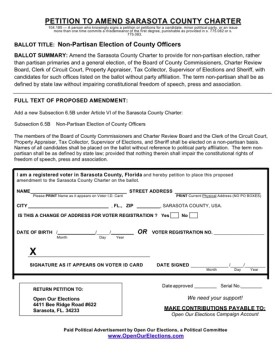 A newly formed political action committee has announced its plan to promote a ballot measure that would make all countywide races nonpartisan.

Last month, The Sarasota News Leader broke news about an effort by members of the Public Interest Coalition to alter the county charter so party affiliation plays no role in the election of county officers such as the supervisor of elections and county commissioners. The Public Interest Coalition, or PIC, is made up of representatives from groups including the Sarasota County Council of Neighborhood Associations, the Audubon Society and the Sierra Club, among others.

Open Our Elections is the name of the new PAC formed to promote the charter amendment. “In a county where all of the cities and the School Board already have non-partisan elections, it is time to make the election of county officials nonpartisan as well,” says Open Our Elections Chairwoman and former Venice City Councilwoman Sue Lang, according to a press release issued today.

One major motivation for the PAC: the write-in candidacy of Victoria Brill.

The daughter of a county GOP fundraiser, Brill filed paperwork to run as an independent write-in candidate in last year’s supervisor of elections race. That move prevented more than 150,000 independents and Democrats from being able to participate in the primary election between Republicans Kathy Dent and Jon Thaxton. According to state rules, anyone can vote in a partisan primary, if there are no other candidates running in the general election. Brill’s move limited the election to only Republicans, leaving a majority of residents without a say in who their supervisor of elections is. In the end, only 7.8 percent of registered Sarasota County voters cast a ballot for Dent, the winner.

PIC member Bill Zoller says Open Our Elections representatives will appear before the County Commission later this month to ask the board to place the issue on the ballot. If the commissioners decline to do so, Open Our Elections will be charged with gathering almost 14,000 signatures to bring the issue to voters.

In today’s press release, Lang says Open Our Elections has already found “broad support” among like-minded organizations and citizens “who have been alarmed by the recent manipulations, abuses and dirty tricks that seem to have become par for the course here.”

Click here to read or download a copy of the petition. Here’s the full Open Our Elections press release:

Sarasota, Florida 13 May 2013 — Open Our Elections, a PAC formed by members of the Public Interest Coalition (PIC), announced today that they have launched a petition drive aimed at amending the Sarasota County Charter to provide for non-partisan election of all elected Sarasota County officials. According to Open Our Elections chairperson Sue Lang, “In a county where all of the cities and the School Board already have non-partisan elections, it is time to make the election of county officials non-partisan as well. We have seen the abuses that can occur in our current partisan system, as happened in the 2012 elections for Supervisor of Elections and for one County Commission seat, when the ‘write-in’ loophole was exploited to disenfranchise approximately 56% of our registered voters. This is simply unacceptable.”

The petition now being circulated includes non-partisan election of the County Commission, the Charter Review Board, Sheriff, Property Appraiser, Tax Collector, Clerk of Court, and Supervisor of Elections. “When most citizens of Sarasota are focused on concerns about our quality of life; protection of our environment, resources, and habitat; and about how to have a sustainable and vibrant economy, it is time to level the playing field so that the largest number of voters can participate in every election”, said Bill Zoller, a member of the group. “National party ideologies really don’t figure into our local issues.”

“Sarasota County is fortunate to be one of the 20 charter counties out of the 67 counties in Florida,” said Lang. “That gives us the ability to determine our own election procedures, instead of being bound by whatever rules the State has in place, as non-charter counties must do.” Five other charter counties already provide for non-partisan election of all of their county officials, including: Leon, Orange, Columbia, Volusia, and Miami-Dade.

In non-partisan elections, any person who qualifies to run for an office, regardless of party affiliation, would be on the ballot in an August primary, and if no candidate received a majority of the votes cast, a runoff would occur between the top two vote-getters at the November general election. No party identification would appear on the ballot, nor could a candidate’s campaign literature/information include his/her party affiliation.

“We are very gratified by the broad support we are already receiving from citizens and organizations who have been alarmed by the recent manipulations, abuses, and dirty tricks that seem to have become par for the course here,” said Lang. “The figures below tell the story quite well, and we believe it is high time to give this story a far better ending. We have a daunting task ahead in collecting nearly 14,000 petitions signed by voters registered in Sarasota County, but we are confident that this is a change that the citizens of Sarasota County will embrace.”

A presentation on this amendment will be made at the CONA meeting at 7:00 PM on Monday, 13 May, at the Sarasota Garden Club at 1131 Blvd of the Arts, Sarasota. Petitions will be available, and we will take questions.