Pine View School in Osprey, the Sarasota County Public School District’s school for gifted students, saw 100% of its 10th-graders pass the Florida Comprehensive Assessment Test writing exam this spring, while 99% of its fourth-graders and 98% of its eighth-graders passed, according to data released May 18 by the Florida Department of Education.

Overall, 87% of the fourth- and 10th-graders in the Sarasota County Public Schools passed the FCAT writing test this year, compared to statewide averages of 81% and 84%, respectively, according to data released by the state Department of Education.

In the district’s eighth-grade classes, 86% of the students passed, compared to 77% statewide, the data shows.

Southside Elementary in Sarasota saw 98% of its fourth-graders pass the writing test, while data for eighth-graders shows a passing rate of 92% for both Sarasota Middle School and Laurel Nokomis School.

Suncoast’s website (http://sarasotacountyschools.net/schools/suncoastpolytechnical) points out that its mission “is to provide a highly personalized educational experience where students master a rigorous career and technology driver curriculum ….”

“Because of the more stringent scoring rules this year for the writing test, which [state Department of Education] officials acknowledged should have been communicated more clearly to districts, the level considered proficient was changed from 3.5 to 3.0,” a Sarasota district news release points out. “Consequently, comparisons of this year’s raw scores to previous years’ writing scores should be made with caution,” the release adds.

In Sarasota County, about 9,000 public school students participated in the writing tests this spring, district officials say. Among them were students with disabilities and English-language learners.

State data shows that 64% of the district’s ninth-graders passed the reading exam, compared to 52% statewide. Last year, the passing figure for Sarasota County ninth-graders was 57%.

Pine View School led the way among district schools in the percentage of ninth-graders passing the reading exam, at 99%. Suncoast Polytechnical High School was second, with a figure of 87%.

Phoenix Academy had the lowest passing percentage in the district for ninth-graders passing the test, 21%, the data shows.

Phoenix Academy (www.sarasotacountyschools.net/Phoenix), located in Sarasota, was designed for students at risk of dropping out of school.

Once again, Pine View led the way, with 99% of its 10th-graders passing the test. The second best performance for that grade in the district was at Suncoast Polytechnical High, where the passing rate was 70%.

Phoenix Academy again had the lowest passing rate for that class: 33%.

FCAT reading tests also were administered this spring to students in grades three through 10, but only results for grades nine and 10 had been released by state officials as of Friday.

For detailed reports on the Sarasota district’s FCAT scores, see below: 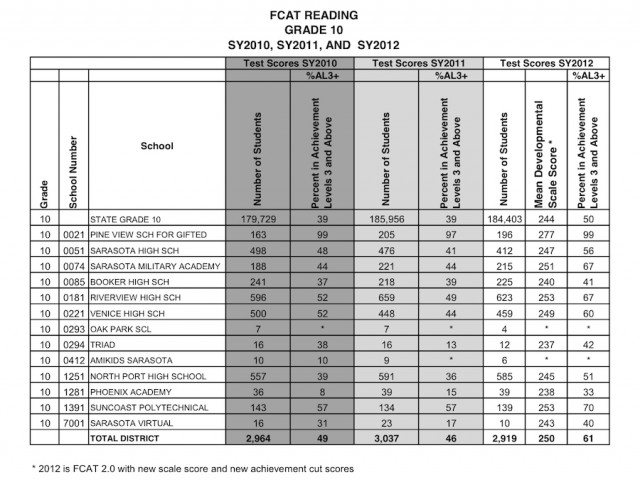 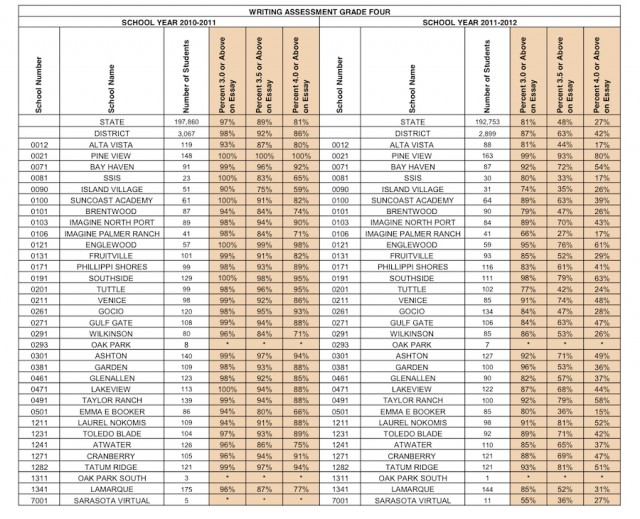 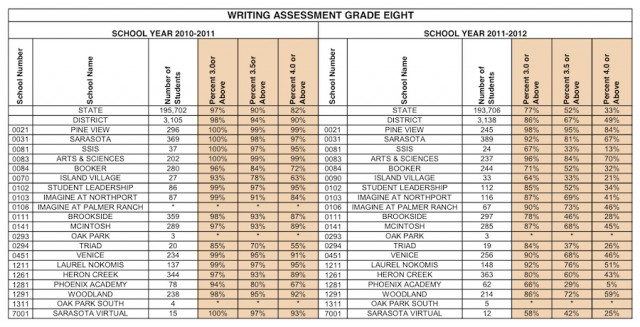