As they conducted the survey between June 25 and July 17, 2018, they found that 78% of the county respondents cited “Traffic Flow” as important or most important when asked about the issues affecting quality of life in Sarasota County.
That was one facet of the 43-page report provided to the County Commission late last summer.

Additionally, when respondents were asked, “In your opinion, what is the most important issue facing Sarasota County today?,” the answer “Traffic/Transportation” came in third, behind “Population Growth/New Development” and “Crime.”

As evidenced by an increasing number of comments during County Commission public hearings over the past couple of years, “Traffic/Transportation” is working hand-in-hand with “Population Growth/New Development” to provoke complaints about a variety of proposed housing projects. More and more residents are saying they feel the road networks in their communities — especially in the eastern part of the county — are far from capable of supporting newcomers.

Sarasota County’s plans, the webpage adds, include the following:

Yet, of the approximately $190 million allocated for the county’s draft Capital Improvement Program (CIP) for the 2020 fiscal year — which will begin Oct. 1 — only 13% of the funding has been set aside for transportation projects: about $25.2 million. Even then, only a portion of that money has been designated for roadwork.

Altogether, the draft 2020 CIP identifies more than $1.25 billion in unfunded road projects. At the rate of $25 million per year, it would take more than 50 years to clear the backlog — without inflation and if all that money were dedicated to road projects.

Factor in inflation, and it could take 100 years to build all the road improvements just in the latest five-year plan, unless the construction budget is increased dramatically.

For the current fiscal year, the County Commission listed only one policy relating to transportation among its top priorities: transportation to the barrier islands.

Newer commissioners on the board would not recall the 2015 public hearing that the commission conducted on the county’s mobility fee schedule.

The technical report presented by Jonathan Paul, then the county’s special projects planner, estimated $1.9 billion in capacity improvements would be needed over the following 20 years to accommodate future growth. At that time, however, the report identified future funding sources of well less than $500 million.

The commission formally will vote to approve the FY2020-2024 CIP in September, during a public hearing on the Fiscal Year 2020 budget. Nonetheless, staff reminds the board members and the public that while the CIP covers five years, the vote clears the way for projects planned only in the upcoming fiscal year. 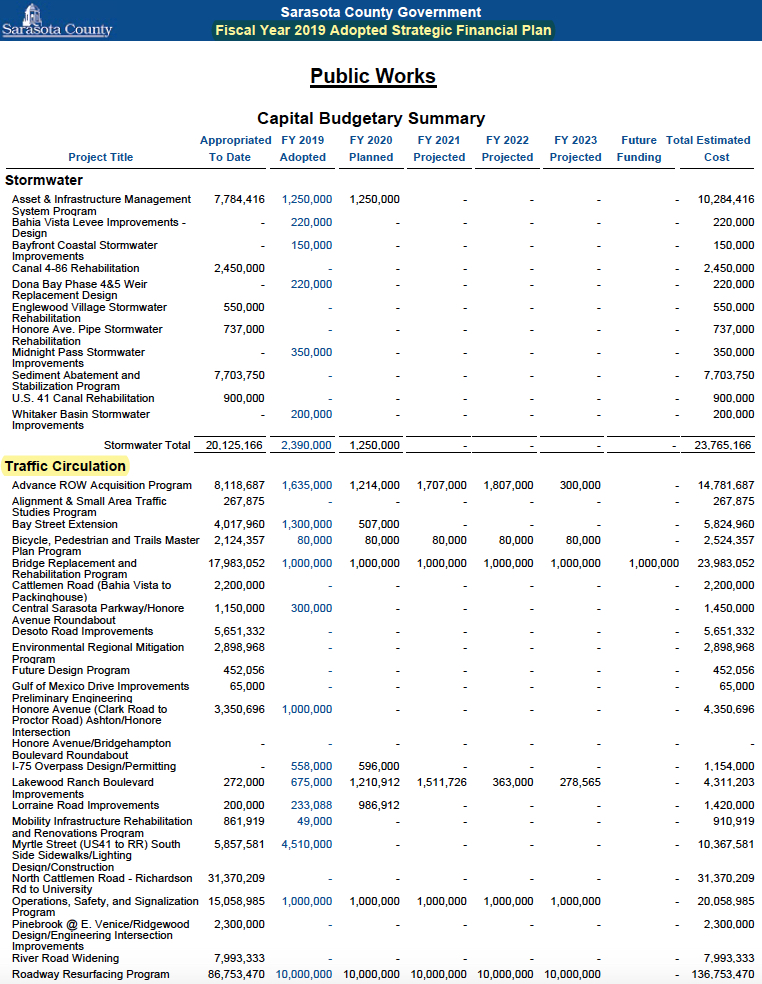 During the May 17 county budget workshop, when staff reviewed the latest CIP, three commissioners agreed to boost spending for road resurfacing. That decision came after Rohini Bobba, a technical specialist in the Transportation Division, discussed inflationary and other factors that mean fewer projects can be undertaken each year with the $10 million set aside by board policy for repaving.

Commissioner Alan Maio proposed adding up to an extra $5 million a year for FY20 to help alleviate the situation. The board approved that additional funding on a unanimous vote during its June 19 budget workshop.

However, no comparable discussion in recent years has focused on road spending.

Among construction projects listed with funding for FY20 are intersection improvements at U.S. 41 and Fruitville Road, where a new two-lane roundabout will be built in downtown Sarasota; and improvements on Cattlemen Road between Bahia Vista Street and Packinghouse Road. The draft CIP has $1.5 million set aside for the latter project in the 2020 fiscal year and another $3.5 million proposed for FY21. The document says an additional $5 million in project expenses remains to be found.

The CIP includes many construction projects designated for “Traffic Circulation” with no funding attached to them over the five years the new CIP will cover. Among those is the widening of Honore Avenue from two lanes to four between University Parkway and Fruitville Road. That project was ranked 21 on the FY20 list, with primary funding sources listed as gas tax revenue, grants, mobility fees and sales tax — or surtax — revenue. The total expense has been estimated at $36,380,509.

In similar fashion, the CIP includes the widening of McIntosh Road from two to four lanes from Fruitville Road to Bee Ridge Road; likewise, no funding has been programmed for the project over the next five years. The estimated expense, the CIP says, is $20,937,741.

A number of projects commissioners have referenced over the past year, in association with planned new housing developments, are listed in the draft CIP only as “New construction,” with estimates of their expense.

One of those is the extension of Lorraine Road between Fruitville Road and Knights Trail Road.

On July 9, during the commission’s next-to-last regular meeting before its four-week summer recess, Commissioner Maio told his colleagues he had attended meetings about Lorraine Road on his own, to stay abreast of the discussions. “Property owners [are] buying into the alignment,” he pointed out, though he acknowledged that the design “still might need refinement.”

The design of the Lorraine Road Extension is ranked No. 24 on the FY20 list of transportation projects in the CIP, as presented to the commission on May 17. North County mobility fees were pegged as the primary funding source for the $2 million set aside for the 2020 fiscal year.

“As we get on the east side of the interstate,” Maio said on July 9, “there are different parts of our thoroughfare plan that will be impacted by our decisions …”

He also referenced the fact that “many projects [have] gotten their entitlements.”

One of those projects is Grand Lakes, a Neal Communities development that won County Commission approval in 2018 and then survived two legal challenges by neighboring residents. People pointed to the density of the project — up to 1,097 homes — and emphasized during County Commission hearings that, until the planned Ibis Street Extension has been completed, only one road will serve as the primary ingress and egress for them and their Grand Lakes neighbors.

The draft FY20 Capital Improvement Program lists the extension of Ibis Street south to Lorraine Road as “New construction” at an estimated unfunded expense of $8,183,818.

One speaker during a Grand Lakes public hearing referenced comments by county Transportation Planning Division staff that it could be 2040 before Ibis Street Extension becomes a reality.

In the context of their approval of new communities, county commissioners have acknowledged the continuing growth in population, which has an impact on transportation needs.

From 2010 to 2018, the Bureau of Economic and Business Research (BEBR) of the University of Florida says Sarasota County’s population climbed 10%, putting the county in the highest growth category in the state.

Even the lowest estimate for growth, according to a BEBR chart, would put the number of residents at 451,500 in 2040.

Another question in the 2018 Citizen Opinion Survey was “What do you think is the single biggest threat to Sarasota County’s economy?”

Eighteen percent of the respondents cited “Traffic Congestion,” putting it second on the list behind “Lack of Industry and Jobs.”

“Traffic Congestion” was the top answer to that question in the 2016 and 2017 surveys.

1 thought on “Sarasota County continues to fall behind in spending on road projects, in spite of ongoing growth in population and plans for new residential developments”