The Sarasota County School Board this week became the 28th in the state to approve a resolution calling on Gov. Rick Scott, the Florida Legislature and the State Board of Education to improve the state testing system, Wayne Blanton, executive director of the Florida School Boards Association, told The Sarasota News Leader July 26.

“We expect all 67 [school boards] to pass it,” Blanton said.

A number of citizens groups across the state are working on a similar resolution, he added.

Sarasota County School Board Chairwoman Caroline Zucker brought the resolution on high-stakes testing to her fellow board members’ attention during their June 19 work session.

As a member of the FSB Board of Directors, Zucker told the News Leader, she joined in the unanimous adoption of the resolution during the board’s Spring Conference in mid-June in Tampa. The general membership of the FSB approved the resolution the very next day, she said.

“I’ve never seen anything as well-supported … around the state,” Zucker told the News Leader this week.

Although the majority of the Sarasota County School Board members agreed by consensus in June to approve the resolution, the formal adoption came during the board’s regular meeting on July 24.

An issue brief prepared by the FSBA points out that the Florida Comprehensive Assessment Tests in reading and math first were given to students in various grades in 1998. Over the years, the FCAT was expanded to include exams in writing and science. This year, the state added end-of-course testing in Algebra I, Geometry and Biology I, the brief notes.

“Standardized tests are a widely accepted diagnostic tool to measure and identify student learning gains, proficiency, and areas of student academic weakness,” the brief says. “However, under Florida’s high stakes testing structure, student performance on statewide standardized tests has been used, sometimes exclusively, to gauge the performance of school personnel, schools, and school districts and has been used to provide or deny state funding. More important, student performance on these tests has been used, sometimes exclusively, to determine student progression, retention, remediation, course credit, graduation, and/or access to desired and elective courses and programs.”

During the July 24 Sarasota County School Board meeting, the resolution was included on the consent agenda, which passed unanimously. (Board member Carol Todd was absent.) However, following the vote, Vice Chairman Frank Kovach said he did not support the resolution.

“Certainly, I think some changes need to be made” in the state’s testing program, he said, but he said he felt the measure argued against accountability, which he does support.

“I do not approve high-stakes testing,” board member Shirley Brown said. “I oppose the reliance on these FCATs,” she said, adding that she would like to have teachers and other people more involved in student testing.

“We’ve seen a lot of mistakes that were made this year,” she added.

This spring, after changes in the FCAT writing test, the number of passing scores plunged, prompting state officials to revise the passing score.

Most recently, state education officials announced that some schools had received the wrong end-of-year grades.

Earlier during the School Board meeting, Superintendent Lori White pointed out that Tuttle Elementary was one of those schools: Its B had been revised to an A, White said.

That example, White added, “speaks to the incredible complexity of our current system.”

School Board member Jane Goodwin said she felt the FCATs should be given to students at the end of the school year, instead of early in the spring, and she felt “it would be better if perhaps more than one entity was able to grade those tests.”

Zucker pointed out that the resolution does not seek to do away with accountability.

She read the first paragraph to her fellow board members to emphasize that:

“Whereas, Florida school districts strongly support accountability on the school, district, and state level for the delivery of the uniform, efficient, safe, secure, and high quality system of free public schools guaranteed by the Constitution of Florida …”

Zucker added, “It says that we need to look at [high-stakes testing] and make sure everything we’re doing is correct and we’re not putting an undue burden on our students …”

Zucker told the News Leader the FCAT “should not be the be all and end all” for deciding whether students should be promoted or for determining teachers’ effectiveness in the classroom, for example. She added, “I don’t believe everything you do for the whole year should hinge on one test.”

If the state does not make changes in the program, she said, she fears fewer families will want to move to Florida in the future. “Who’s going to want to bring their kids here to put them in school?”

The key to getting state officials to change the testing program is for all 350 school board members in Florida to gain support of their constituents for the initiative, she said. “We have to stay together.” 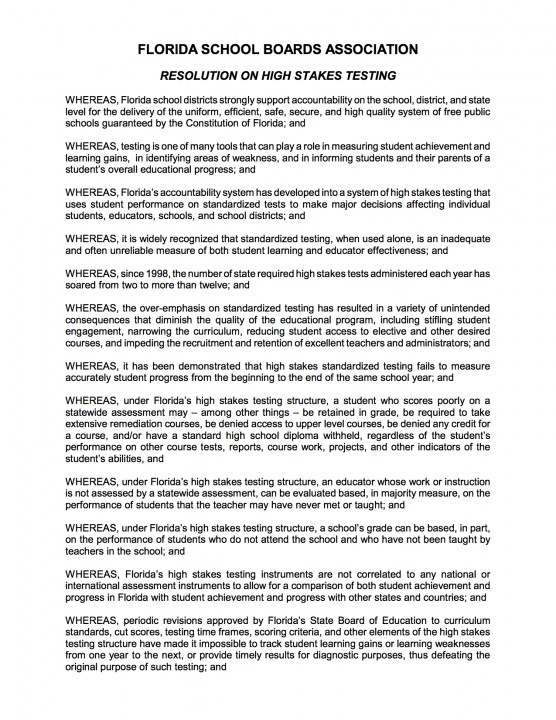