It’s a bit of a head-scratcher. In tough economic times, the old wisdom says that crime goes up. But in 2011, serious crime in the city of Sarasota dropped 5.2 percent compared with the previous year.

The number of so-called “index offenses” fell to 1,803 from 1,901. These are the serious crimes tracked by the FBI. Meanwhile, total arrests were up 10 percent.

“If you arrest the bad guys and keep them in jail, you prevent the crimes they were going to commit,” said City Police Captain Paul Sutton.

He noted that lower level economic crime, such as bicycle thefts and shoplifting, increased from 2010 to 2011. “It’s up about 1.1 percent over last year,” he said.

Sarasota statistics overall mirror a drop in serious crime across the state, said Sutton. “For Florida, rapes, robberies and murder were all down by fractions of a percent,” he said. In Sarasota, murder, rape and robbery increases were offset by large drops in aggravated battery and burglary.

But where Sarasota arrests were up 10 percent, Florida’s arrests overall were down 6.6 percent. The uptick in city arrests continued through the first four months of 2012, when total arrests were up 14 percent over the previous period.

Sutton complimented the Sarasota Police force. “They’ve got every reason to be down. They haven’t had a raise in three years; there’s talk about their pensions, plus the media exposure. But they are out there making more arrests, conducting more field interviews and answering more calls for service,” he said.

Sutton supplied several anecdotes about cooperation between the city’s residents and officers in detecting and arresting lawbreakers. “If we can keep everybody working together, we can keep driving down crime,” he said.

For a look at the complete 2011 crime report, see below: 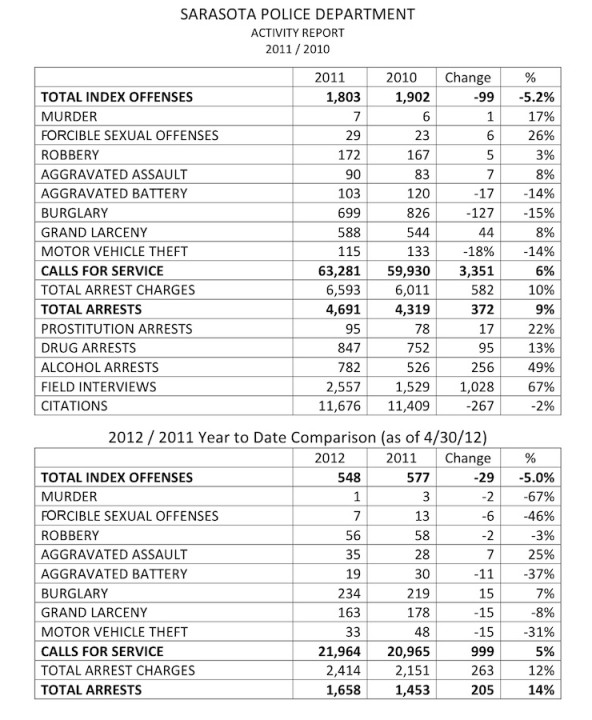