What began in the early summer of 2020 as a small group’s grassroots fight against a proposed high-rise hotel on Siesta Key has grown to include 37 homeowner and condominium associations representing nearly 3,200 households, members of the Siesta Key Condominium Council learned this week.

“That is a lot of growth from where we were in [the September-October 2020 time frame],” Mark Spiegel, president of the Siesta Key Coalition, told the Council members during their meeting on March 9. And the organization is “growing every week,” Spiegel added.

Frank Jurenka, president of the Condominium Council, pointed out that the nonprofit has been “a partner of the [Coalition] from the start.” Months ago, Jurenka added, the Council surveyed its members about the eight-story, 170-room hotel proposed on four parcels between Calle Miramar and Beach Road, just on the edge of Siesta Village. “It was virtually unanimous,” Jurenka added, that Council members opposed the density and intensity of the plans.

Spiegel also noted that the Siesta Key Association (SKA) has been involved with the Coalition almost from the beginning. The SKA, he added, has about 8,500 members on its own.

The Coalition has been organized as a 501(c)(4) nonprofit, Spiegel continued, and it has launched its own website, www.skcoalition.org. Further, he said, the directors have engaged a land-use attorney with vast experience, and Coalition leaders are interviewing other consultants who can assist the organization in its efforts.

“A lot of people need to understand … we are not anti-hotel or anti-redevelopment on the Key,” he emphasized. “We just want it to be smart growth” that is consistent with the zoning regulations contained in the Siesta Key Overlay District (SKOD) and consistent with the county’s Comprehensive Plan policies regarding the barrier islands.

Although the Coalition initially was focused on the Calle Miramar hotel, Spiegel pointed out, it has expanded its scope to address two other hotel applications involving Siesta. One is the seven-story, 120-room hotel that Siesta chiropractor and businessman Dr. Gary Kompothecras wants to construct on Old Stickney Point Road. The other entails the redevelopment of Siesta Key Beach Resort and Suites, which is located on Ocean Boulevard near the western end of Siesta Village. The owners of the latter property want to expand the facilities from 55 rooms to 170, Spiegel said, but they are “not seeking as dramatic changes” as the people behind the other two projects.

The County Commission has to approve what the county staff calls “transient accommodations” on parcels zoned CG, he pointed out.

Further, the commission will have to approve the Calle Miramar and Kompothecras applications’ requests for structure height above the 35-foot base flood elevation allowed in the island’s zoning regulations, Spiegel added. The Calle Miramar hotel would be about 83 tall, while Kompothecras’ structure would have a height of approximately 80 feet.

Moreover, he continued, the developers of both those projects are seeking changes to the county’s Comprehensive Plan that would modify the residential density standards for the Key.

The Calle Miramar project would entail 6.5 times the allowed residential density on its site, he said, while Kompothecras’ hotel would have quadruple the density.

Commercial General property countywide is limited to 13 residential dwelling units per acre. A hotel room without a kitchen is considered half a dwelling unit; thus, 1 acre can have up to 26 units.

The developers of the Calle Miramar hotel have applied for a Comprehensive Plan amendment that would eliminate residential density for hotels on the county’s barrier islands, though William Merrill III, a land-use attorney with the Icard Merrill firm in Sarasota, says no property exists on either Casey Key or Manasota Key to which that new standard could apply.

Kompothecras’ proposed Comprehensive Plan amendment, which would apply just to what he refers to as the “South Bridge” area of the island — south of Stickney Point Road — calls for doubling the density allocation for hotel rooms. That means each room without a kitchen would count as one-quarter unit.

Spiegel stressed to the Condominium Council members that the leaders of the Coalition do not believe the general public understands the intensity of the proposed projects or the fact that, if they won County Commission approval, they would be precedent-setting.

Siesta Key has about 30 acres of CG property, he added. Hotels could be considered the “highest and best use” for such parcels, he said.

The concern about the future of other commercial parcels on the Key has been a significant factor in the growth of the Coalition, Spiegel pointed out.

Looking from the past to the future

The 1999 Siesta Key Community Plan was the foundation for the Siesta Key Overlay District zoning regulations and county future land use policies for the barrier islands, Spiegel explained. Those were put in place to protect the island against increased density and intensity, as traffic congestion, the health of the island’s environment and hurricane evacuation issues already were a focus of Siesta residents in the late 1990s, he noted.

The proposed high-rise hotels, Spiegel continued, “are in fact the poster child of density and intensity, in contradiction [to] and inconsistent with the [county’s] Comprehensive Plan.”

“Everybody on Siesta Key needs to wake up,” Spiegel told the Council members. “This is far more wide-reaching than just a rezoning of a piece of land for a hotel.”

His primary message to residents on the Key, Spiegel said, is to join the Coalition. The Condominium Council has more than 100 associations in its membership, he pointed out, but “only 27 of them have joined so far.”

Nonetheless, the Coalition is raising funds to pay for the land-use attorney and the other consultants it will need as the hotel applications make their way through the county planning process toward eventual public hearings before the county Planning Commission and County Commission, he said.

A “Donate” button is on the Coalition’s website, Spiegel noted.

“One hundred percent of that money [will go] to direct costs associated with fighting [the hotel plans],” he emphasized.

Moreover, he invited Council members who are part of condominium associations that have not joined the Coalition to try to educate leaders of those groups, as well as their neighbors, encouraging them to join the fight.

Between 5,000 and 6,000 households are on the Key, Spiegel said. All of them should be part of the Coalition. 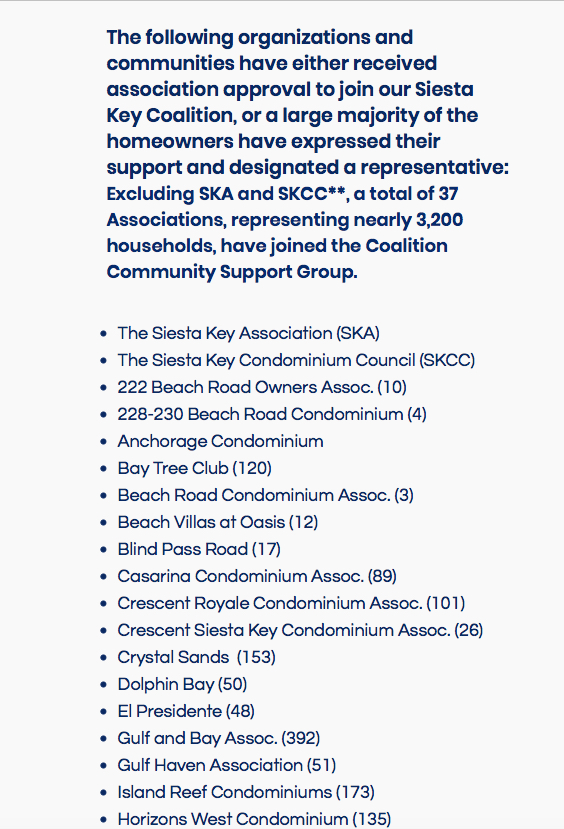 For more information, persons may email SKCoalition@gmail.com, or visit the website: https://www.SKCoalition.org.