The firm, ADEAS-Q, will be paid out of funds the city received through BP’s settlement of damages over the Deepwater Horizon oil spill in the Gulf of Mexico in 2010. The project is expected to take 18 months, though ADEAS-Q will stay on board for another 18 months in the event updates of the plan are needed after the work has been completed, Colleen McGue, the city’s chief transportation planner, told the commissioners.

During the discussion, Commissioner Hagen Brody asked McGue, whether the plan would be “digestible … for the community, or is it going to be highly technical?”

“The hope is that it will be digestible,” McGue responded. The process that will lead to the completion of the plan, she added, “will be very understandable for the community.”

McGue further noted that, through a city employee contest, the name of the plan will be Sarasota in Motion.

“We’ve needed to do this kind of planning,” Vice Mayor Jen Ahearn-Koch said, “and I’m really excited about the prospects of all of this.”

She participated by telephone, with Mayor Liz Alpert having explained that Ahearn-Koch could not be present in person because of a family emergency.

Ahearn-Koch also told McGue that the key to the success of the process will be “excellent communication with the community and city staff.”

Commissioner Shelli Freeland Eddie emphasized public engagement, as well. “We want people to be involved as early as possible.”

“There’s a project schedule [of] community engagement … throughout the entire 18 months,” ADEAS-Q President and Project Manager Jason Collins pointed out.

Additionally, both Brody and Freeland Eddie said they would like for the commission to get regular updates as the project unfolds.

“You could come to us,” Freeland Eddie suggested to McGue, after each of the five sections of the plan has been completed, but no later than quarterly.

In providing details about facets of the project, McGue explained that because the Sarasota/Manatee Metropolitan Planning Organization (MPO) plans to update its long-range transportation plans concurrent with the city’s project, city staff and ADEAS-Q will have access to extensive new data that the MPO plans to purchase from Verizon. Whenever a person has the Bluetooth technology running on a smartphone, she added, the person’s location is tracked “at the aggregate level.”

The data will reflect the number of people traveling to and from Sarasota and the region, McGue added.

City Manager Tom Barwin noted that city staff also is working with Uber to try to obtain data, which the company collects all over Florida.

This first citywide master transportation plan “really adopts the premise of life in the 21stcentury,” Collins pointed out. It will reflect transportation changes over the past 10 to 20 years.

City policies and financial considerations will be part of the process, he noted.

“I don’t want us to get so top-heavy on the future that we forget the now problems,” Freeland Eddie responded, listing — for examples — public transportation, congestion, bicycle lanes and the burying of both power lines and cable for faster internet access as new roads are constructed.

Commissioner Willie Shaw told McGue that he wanted staff to focus on projects that could be undertaken concurrently, instead of having to tear up “what we just put down” to add new infrastructure.

“We don’t want to do that,” McGue replied, concurring with him on the need to refrain from multiple projects in the same area.

McGue also pointed out that she and Transportation Planner Megan Lui are “here day-to-day,” working on some projects that they hope to see completed prior to the implementation of the master plan.

At one point, Vice Mayor Jen Ahearn-Koch referenced part of the scope of the work for the master transportation plan, asking how 10 intersections would be chosen for special attention because of problems related to those areas. 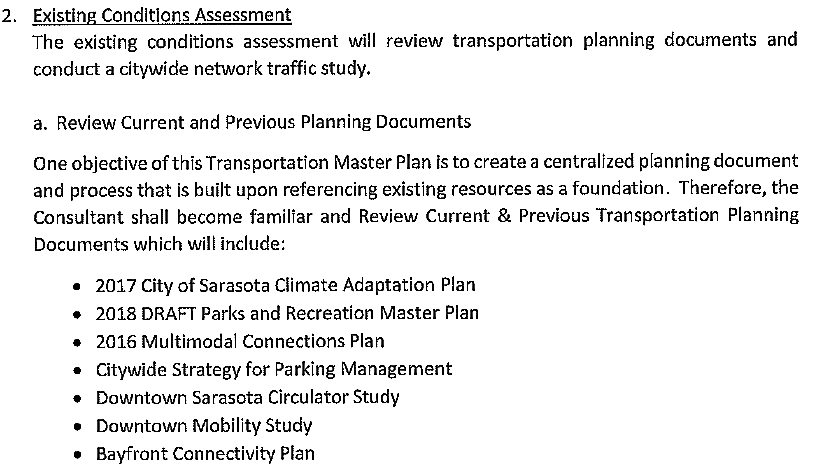 During the conditions assessment part of the project, McGue explained, the team will review citywide data to determine the areas with the worst congestion, as well as opportunities to encourage drivers who routinely use the roads in those areas to walk or bike, instead. “We are … anticipating that there will be at least 10 intersections where we have some big issues with congestion and safety.”

Ahearn-Koch also asked about the section of the scope of work calling for the creation of an interactive website, which will include a map for the public to review and click on, so they can add comments about problems they have encountered or observed.

The intent, Collins of ADEAS-Q said, is for people to provide real-time remarks on situations. Those responses would guide the project team, he added, in to deciding which intersections “should be vetted in more detail.”

Commissioner Freeland Eddie pointed out that the city already has an interactive system called GIS. Will the new map be able to “talk” to the GIS system, she asked.

McGue indicated that the project team would make sure the two systems could communicate.

In response to another question from Ahearn-Koch, McGue said that the team members would try to re-use as much of the city’s existing data as possible. For example, she said, it has a lot of information gleaned from the Advanced Traffic Management System (ATMS) that is used in the city and Sarasota County to try to facilitate traffic flow. Nonetheless, McGue added, “We’re definitely collecting new data.”

On one other note, McGue told the commissioners that ADEAS-Q was one of six firms that responded to the city’s Request for Proposals (RFP) for the project.

In fact, she said, the selection committee ended up reporting a three-way tie after it had listened to the presentations of the three companies it had selected as finalists. That was the first time in the city’s history, she added, that such a tie had resulted from a city procurement process.

Finally, she said, ADEAS-Q was chosen because it specializes “in the technical component of transportation planning, engineering and design. The combination is particularly good for the implementation of transportation projects.”