Nonprofit Save Siesta Key continuing to seek signed petitions and financial contributions as it works toward Sept. 1 deadline for submitting materials to Florida Legislature

The Jensen Beach consultant hired by the Save Siesta Key nonprofit to undertake a fiscal analysis related to incorporating the barrier island has determined that residents would need to pay 0.25 mills to provide for operations if the Key were to become a municipality.

That was part of the news that Save Siesta Key board member Tracy Jackson told an audience on July 22 at Siesta Chapel.

“The big question” that Save Siesta Key’s board members have heard as they have pursued incorporation, Jackson acknowledged, has been “Are taxes going to go up?”

One mill represents $1 per $1,000 in property value. “I had no idea what a mill or millage was when I heard this whole thing,” Jackson said.

For a house valued at $1 million, she continued, the extra payment would be $250 a year, or less than $21 per month, which is lower than the average household’s cable bill, she indicated.

The return on investment for the extra property taxes, she emphasized, is “a community that gets to decide what’s prioritized,” including “more control over zoning and development.”

In response to an audience member’s question, Save Siesta Key board member Timothy Hensey acknowledged that the 0.25 mills would be paid in addition to the county’s millage rate. He added that a Florida Supreme Court decision handed down a number of years ago makes it necessary for island residents to keep paying county property taxes.

On July 14, the County Commission approved a not-to-exceed total millage rate of 3.5561 for the 2022 fiscal year, which will begin Oct. 1. That includes 0.10 mills for services that would be provided by agencies and the county through a Mental Health Care Special District.

The commission vote was 3-2. As Kim Radtke, director of the county’s Office of Financial Management pointed out before the vote, the rate can be lowered prior to the board’s adoption of the 2022 budget. The final hearing on the budget is scheduled for Sept. 29.

Save Siesta Key board member Chuck Byrne told the audience on July 22, “A millage increase of any size is a pretty big negative to a lot of people.” Nonetheless, he continued, “We’re trying to be as responsible as we can” in planning to address issues of top concern to the island’s residents.

“If we want to take on more [responsibilities],” Byrne added, “it’s going to cost us more.” Yet, he indicated that tax increases would not be possible without a vote of the residents.

Save Siesta Key Treasurer Stephen Lexow told the audience, “Siesta Key right now is blessed with approximately $7 billion worth of property … In our case, a very small millage [rate brings in a lot of revenue].”

A quarter of a mill, Jackson explained, “was the absolute bare bones minimum for the “government lite” form of management Save Siesta Key leaders have espoused in working toward incorporation, she added.

Leaders of the nonprofit, including Jackson on July 22, have indicated that the municipality would have four to eight employees and a council whose elected members would take no pay.

A speaker during the July meeting, John Gucciardo, the former deputy town manager of Fort Myers Beach, told the audience, “We may have cut it a little close to the bone in starting out” after the incorporation of that community. The goal at the outset was to hire no more than three people, he said. It took several years to increase that to eight, he added. “We probably could have accomplished things in better fashion” with more employees in the beginning, he said.

In response to a question, Gucciardo pointed out that the initial number of employees for the Town of Siesta Key would be “really up to your expectations.” He added that it is his belief that fewer workers would be needed if they have the necessary skills to tackle the responsibilities they would be shouldering.

In another update, Jackson noted that Save Siesta Key has received 1,118 petitions since it started a drive a few months ago to gather those as part of the package it will have to turn in to the Florida Legislature by Sept. 1, if incorporation has a chance of succeeding.

“We’re shooting for 2,000,” she said, noting that the nonprofit wants to show the legislators how strong support is for the new municipality.

(Although part of northern Siesta is located within the City of Sarasota’s jurisdiction, Save Siesta Key has been focused on incorporating only the area of the Key that is within Sarasota County’s jurisdiction.)

Jackson indicated that the petition drive had not been underway long as she stressed the board’s delight with the number of signers. 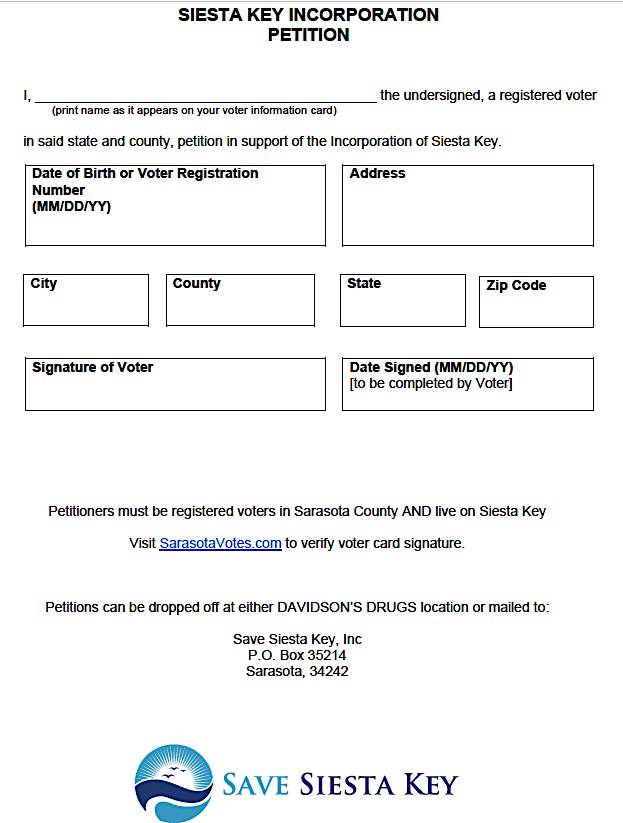 On May 19, during the previous Save Siesta Key meeting, Jackson encouraged audience members to visit the nonprofit’s website, from which they could download petitions.

The petitions cannot be accepted electronically, the website explains. They may be dropped off at Davidson Drugs either in Siesta Village or in the Southbridge Mall, which is located at 6595 Midnight Pass Road; or they may be mailed to PO Box 35214, Sarasota, FL 34242.

Additionally, Jackson talked of volunteers she called “neighborhood ambassadors,” who are inviting residents in their communities on the Key to sign the forms.

“It’s also looking very much like we’re going to meet our deadline,” Jackson pointed out of the Sept. 1 date.

As leaders of the nonprofit have explained, Sarasota County’s legislative delegation will have to champion a local bill in the 2022 legislative session, which will begin in January 2022, and that bill will have to win majority approval in the Legislature. Then Gov. Ron DeSantis would have to sign the bill, and Siesta voters would have to approve incorporation during a referendum. The earliest the Village or Town of Siesta Key could begin functioning would be Jan. 1, 2023, Save Siesta Key Treasurer Lexow noted.

Fundraising and a new survey

The nonprofit has hired several consultants, Jackson pointed out. “These guys cost money.”

One of those consultants is William Underwood, who prepared the fiscal analysis.

Jackson also asked audience members to fill out a new survey that Save Our Siesta Key is featuring on its website.

“In this survey,” the website says, “we hope to create a forum for our community to voice their opinions and desires for what they hope to gain from the Incorporation of Siesta Key.”

As of the evening of July 22, Jackson noted, 100 people had taken the second survey. Their answers put the top three priorities for the new governing body as follows:

Lexow, Save Siesta Key’s treasurer, did point out to the July 22 audience members that, with public hearings having been scheduled already for two of the proposed hotels on the island, the best hope for stopping the projects is another island nonprofit, the Siesta Key Coalition.

Its members began organizing in the early summer of 2020 after Siesta businessman Dr. Gary Kompothecras announced plans for a seven-story, 120-room hotel on Old Stickney Point Road — plus a five-story parking garage between that street and Stickney Point Road; and the New York City owner of property between Beach Road and Calle Miramar — whose long-time lessee is RE/MAX real estate agent Robert Anderson Jr. — filed a preliminary application with county staff for an eight-story, 80-foot-high hotel on the edge of Siesta Village.

Mark Spiegel, president of the Coalition, needs as many homeowner associations as possible to support that nonprofit’s efforts, Lexow added.

As residents of Blind Pass Road on south Siesta, Lexow continued, both he and Jackson had been encouraging their neighbors to join the Coalition’s cause.

“If we don’t do something now,” Jackson said, alluding to incorporation, how many more hotel proposals might spring up?

In response to another question from the audience, board member Rick Munroe, owner of Sun Garden Café in Siesta Village, explained that when John Davidson, chair of Save Siesta Key, launched an incorporation initiative about 30 years ago, the island was not facing any of the issues that residents have cited in recent years as a reason for the Key to become a municipality.

Munroe cited the proposed hotels, illegal short-term vacation rentals and the County Commission’s approval in December 2018 of the mixed-use development Siesta Promenade, which is planned on about 24 acres within the northwest quadrant of U.S. 41 and Stickney Point Road.

During the County Commission hearing on Siesta Promenade, numerous Siesta residents stressed that the proposal for 414 apartments/condominiums, a 130-room hotel, 133,000 square feet of retail space and 7,000 square feet of office space on Stickney Point Road would exacerbate the significant traffic congestion that has become common on the south approach to the Key. The fact that a drawbridge opens and closes more often during the height of tourist season already leads to problems, they emphasized.

Yet, on mostly split votes, the commissioners approved the petitions that Benderson Development Co. had submitted to the county for that project.

Although incorporation did not succeed 30 years ago, Munroe added on July 22, it did lead to the creation of the Siesta Key Overlay District zoning regulations for the island.

The problem now, Munroe stressed, is “There are variances being given left and right” to developers on the Key.

“The island has changed,” he said, “and it’s changing quickly.”