With Commissioner Christian Ziegler in the minority, the Sarasota County Commission this week voted 4-1 to proceed with drawing new boundaries for the five commission districts.

Only three of 16 public speakers advocated for the process. Nonetheless, Commissioner Nancy Detert — who, in late February, initially suggested the undertaking — remained adamant in her view that the districts need to include population counts with as little deviation as possible.

“States must draw districts with populations as close to perfect equality as possible,” Hines read, quoting Ginsburg. “‘Where the maximum population deviation between the largest and smallest district is less than 10%, the Court has held, a state or local … map presumptively complies with the one-person, one-vote rule. … Maximum deviations above 10% are presumptively impermissible,’” Hines added with emphasis.

Research that a Tallahassee consulting firm — Kurt Spitzer & Associates — conducted this summer for the County Commission showed that the difference between the population in the smallest commission district — District 2 — and the largest — District 5 — deviated by 12.26 percentage points, which Spitzer pointed out during an Aug. 27 presentation to the board.

Based on population data from the University of Florida’s Bureau of Economic and Business Research (BEBR), Spitzer said, from 2010 to 2018, the population in North Port grew by 28%. Comparing the number of people in that city in 2019 to the 2018 figure, he added, BEBR put the city’s population climb at 4.3%. “It’s a significant growth.”

Part of North Port is in District 5.

That growth also is the reason, Spitzer said, that he believes his firm’s population figure for District 5 is more accurate than the ESRI software result for that district that county research produced.

Based on the figures Spitzer & Associates provided the commission in early August, Hines said, the districts “need to be equalized. … We have the time; we have the expertise. What argument can you make for not doing this at this point?”

Ziegler countered that he believes the board should wait for the results of the 2020 Census.

“I think the balance has to be as accurate as we can make it,” Detert said.

Detert invited members of the public to submit new district maps, and she suggested that Kurt Spitzer & Associates work with county administration to prepare potentially three maps. Then, Detert said, the board should hold a televised meeting in the Think Tank at the County Administration Center in downtown Sarasota, with the public welcome to offer comments.

Hines also asked this week that County Attorney Frederick “Rick” Elbrecht comment for the record on relevant research that the Office of the County Attorney had undertaken.

Elbrecht referred to a 1974 opinion of the U.S. Attorney General to explain that if the County Commission redraws the district boundaries this year, it would not be required to create new lines again after the 2020 Census data has been certified. The board members must review the Census results, he said, but if the population has not changed significantly in any district to warrant redistricting, then the board would not have to go through the exercise again in 2021.

As for next steps: Assistant County Administrator Brad Johnson said staff would direct Kurt Spitzer & Associates to prepare maps with the updated population data, with alternates to be provided for the districts. Staff would like to come back to the board in September, Johnson added, with those materials. “The timeline overall is fairly compressed,” Johnson emphasized, as the redistricting, according to state law, must be completed no later than Dec. 31.

Commissioners told Johnson and County Administrator Jonathan Lewis that they would like for public outreach to take place in each of the five districts.

Staff then would plan on appearing again before the board in November, Johnson responded.

“We will be working fast to make sure we meet all the required timelines,” Lewis added.

‘A reaction to Single-Member Districts’

Many of the people who made public comments on Aug. 27 accused the commissioners of trying to gerrymander the districts to ensure that Detert and Commissioner Michael Moran — both of whom are eligible to run again — can get re-elected.

(Detert announced on Aug. 27 that she does plan to seek re-election.)

All the commissioners at various times referenced the Single-Member District county Charter amendment that won approval of close to 60% of the voters who cast ballots on it in November 2018.

“The perception here is that this is a reaction to the Single-Member Districts,” Kafi Benz, president of the Sarasota County Coalition of Neighborhood Associations (CONA), told the commissioners.

Chair Hines said Benz was correct. “It entirely changed our system within Sarasota County on how commissioners are elected.”

As a result of that November 2018 voter decision, beginning with the 2020 commission elections, a voter will be able to cast a ballot just for a candidate who lives in the same district as the voter. Previously, a voter could cast ballots in each commission race.

Susette Bryan, secretary of Sarasota Alliance for Fair Elections (SAFE) — which gathered enough registered voter signatures on petitions to get the amendment on the ballot — also accused the board members on Aug. 27 of “interfering with democracy” by calling for redistricting this year.

“Candidates cannot plan their eligibility or campaign … with the five of you making all the decisions,” she told the commissioners. “In this case, the public outcry is warranted,” she added, referring to the opposition to redistricting that has built in the community since Detert first broached the idea. “It’s too fast [and] not transparent enough,” Bryan added of the process.

In an Aug. 26 press release, SAFE President Kindra Muntz said, “Over $150,000 was spent by special interest groups to mislead voters and undermine our grassroots effort, but the weight of our message — reducing the influence of campaign cash in commission elections and refocusing on issues closest to our neighborhoods — overcame even the most entrenched operators in the region.”

“Last November, we didn’t vote to change the commission [district] boundaries before the 2020 Census,” Pat Rounds told the board members on Aug. 27. “Voters choose commissioners, not vice versa.”

Gayle Reynolds, Sarasota Conservation chair of the Manatee/Sarasota Sierra Club, emailed a statement to the news media on Aug. 27, writing, “In response to the victory of Single-Member Districts in November [2018], the effort to change District boundaries before the end of the year, instead of waiting until after the 2020 Census, thwarts the will of the voters and will disenfranchise voters in the 2020 elections.

“Residents voted in 2018 in our current five Districts,” Reynolds added, “not expecting those district boundaries to be redrawn before the next election.”

On Aug. 27, Rounds also accused the commissioners of directing staff to hire the Tallahassee consulting firm only after the ESRI software county staff used to estimate the population in each district “did not justify redistricting early.”

In announcing, “I’m not sold on this,” Commissioner Ziegler nonetheless joined his colleagues in arguing against Single-Member Districts. He said the SAFE initiative was “clearly politically motivated,” with a “Democrat consultant pushing a narrative daily.”

He further contended that the implementation of Single-Member Districts will result in county residents realizing “they lost 80% of their representation and 80% of their accountability. … We’re going to become Balkanized. Factions will form on the commission …”

Detert and Commissioner Moran sought assurances from Spitzer, in the discussion record, that the commissioners had not met with Spitzer — “either collectively or privately,” as Detert put it — while his firm was working on the district population data.

“No,” Spitzer responded to Detert.

“So we don’t have the maps in the back room, all ready to be wheeled out?” Detert asked.

Among the speakers who offered support for redistricting this year, Vanessa Carusone of North Port — who stressed that she was representing herself, not her board — said she felt the Spitzer & Associates data would prove to be more accurate than the results of the 2020 Census, given “the way that they’re going about [the U.S. population count] this time.”

The Trump Administration lost a court battle this year over its intent to count only U.S. citizens. Advocates for undocumented immigrants have voiced concerns that many people in the country will not cooperate with Census representatives, for fear of deportation.

Another supporter of redistricting, Jon Mast, who serves as CEO of the Manatee-Sarasota Building Industry Association, touched on that topic, too, saying the 2020 Census figures would include “illegal citizens.”

Detert referenced that issue, as well. “We have illegals here that don’t want to be counted,” she said. Yet, their inclusion in the Census data is necessary for states to obtain federal funding to provide services for all residents, she pointed out.

Still, Detert predicted, the results of the 2020 Census “will be in the Supreme Court on at least four or five different issues.”

Representing his eponymous firm, Spitzer told the commissioners that his firm asked BEBR for help with the population estimates for the Sarasota County Districts. “They are under contract with the Florida Legislature and with the State of Florida to provide the official population estimates for cities and counties every year,” he pointed out. “They’ve been in existence for 80 years. … They’re very good at what they do.”

Underscoring the latter point, Spitzer noted that the certified 2010 Census results put the total population of Florida at slightly more than 18,800,000. “The BEBR estimate from that same period of time came in at 18,722,000 people, so in a state as large as Florida, having gone through the Great Recession … it’s uncanny that their estimate was about two-tenths off from the Bureau of the Census.” 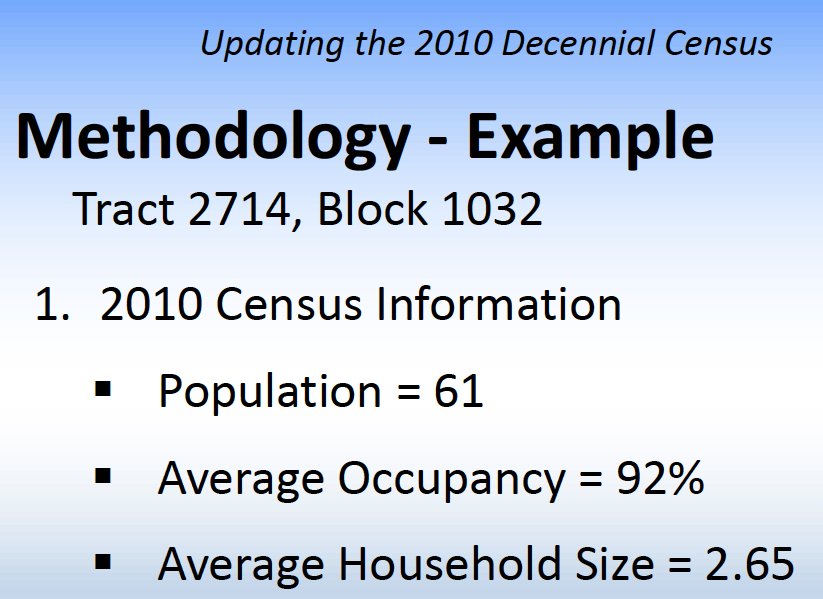 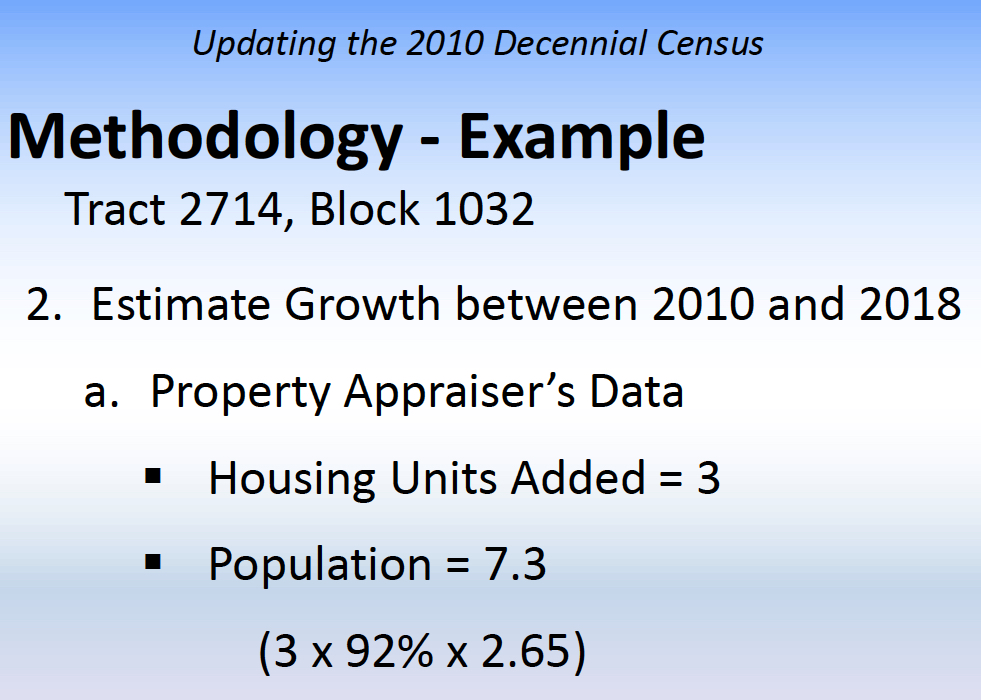 One big reason BEBR’s figures tend to be so accurate, Spitzer continued, is its use of electric consumption data, which show whether dwelling units are occupied full- or part-time or whether the units have become vacant.

“We’re quite confident that these numbers are very accurate,” Spitzer said of the report his firm provided to the county.

2 thoughts on “With Commissioner Ziegler voting ‘No,’ County Commission agrees to proceed with redistricting”