Funding issues remain to be determined, but on June 8, the Sarasota County commissioners voted unanimously to create a Mental Health Care Special District that they would govern and for which they would set the annual budget.

As the champion of the initiative, Commissioner Michael Moran made the motion to adopt the ordinance that lays out how the district will function, and Commissioner Ron Cutsinger seconded it just a fraction of a second faster than Commissioner Nancy Detert, as Chair Alan Maio noted.

“This is his legacy piece,” Detert said of Moran’s advocacy for the district over the past couple of years. “He really deserves the applause of the community for taking this on.”

Cutsinger added what he called a “shout out” to mental health and substance abuse service providers in the county, whom he described as partners in the initiative.

During the discussion, Commissioner Christian Ziegler sought clarification on one point from a consultant the county hired to help with the establishment of the district. Ziegler asked Heather J. Encinosa, a partner with the law firm of Nabors Giblin & Nickerson (which has offices in Tampa, Tallahassee and Plantation), whether the ordinance creates a dedicated “bucket of money” for the services the district will provide.

“It does not,” she responded.

Yet, Maio said, “By voting for this, a commissioner could come away thinking that it’s an automatic one-tenth of a mill increase added” to the 2022 fiscal year budget, which will go into effect on Oct. 1.

That figure, board members noted in early May, would bring in about $6.5 million from property owners countywide.

Maio was referencing earlier discussions the board members had had about how to fund the services that will be provided through the special district.

A staff memo provided to the board in advance of the June 8 meeting noted that if the commissioners wished to allocate approximately $6.5 million in new funding to the district in its first year of operation, the county millage rate would have to rise by 0.1 mills.

Otherwise, Lewis stressed, “If you really want six-and-a-half million dollars available Day 1, I can’t do it without cuts.”

Lewis asked that the commissioners give him direction no later than the latter part of this month about how they wish to proceed with a funding stream. “It’s a big budget,” he pointed out. “It doesn’t turn on a dime.”

On June 22 and June 23, the board members will conduct their annual, typically day-long workshops on the budget for the FY 2022. A third session tentatively has been scheduled for June 25, if they cannot finalize all of their decisions by the end of their June 23 session.

Later during the June 8 discussion, Ziegler said, “All we’re doing here is basically creating the shell and the structure” for distributing the funding for the services. “I personally am not going to support, you know, raising taxes.” When he campaigned for his District 2 seat in 2018, he pointed out, he vowed not to vote for any tax increase.

Commissioner Detert noted that Gov. Ron DeSantis and the Legislature this year prioritized spending on mental health and substance abuse services. For example, she continued, $2.5 billion was allocated for prevention efforts, and $137 was dedicated to community-based services.

“As we set up our new district, can we tap into this program, too, for start-up costs and those sort of things?” she asked Chuck Henry, director of the county’s Health and Human Services Department and the county Health Officer.

Henry replied that he had not yet seen a matrix regarding the distribution of those funds statewide. However, he added, staff “will take advantage of anything that we can.”

Tweaks and the task force

The ordinance the board members adopted on June 8 included tweaks they requested as a result of their May 4 discussion.

Detert, especially, was concerned that the regulations make it clear that the district will aid those with substance abuse issues as well as mental health problems.

To ease that concern, consultant Encinosa read the definition of “Mental Health Care” provided in the ordinance. That “means the provision of services devoted to the treatment of mental illnesses and the improvement of mental health in persons with mental disorders or problems, including services related to substance abuse issues and support services for those recovering from mental illness to include employment services/workforce training, family reunification, housing assistance, intensive case management, medication management, prevention, and transportation.”

Henry of Health and Human Services noted that the language about supportive services was made broad on purpose. That was to give the members of a task force, whose establishment the commissioners requested in May, the ability to identify any options they feel would be necessary to meet community needs.

Moran proposed the task force, under Henry’s leadership, to undertake an assessment of gaps in mental health care and substance abuse services throughout the county.

Henry told the commissioners on June 8 that he would provide County Administrator Lewis a list later that day of the names of the five persons on that task force. Then Lewis could pass along the list to the board, Henry added.

“We have commitments from five individuals,” he continued. “I’m very excited about their capabilities …” 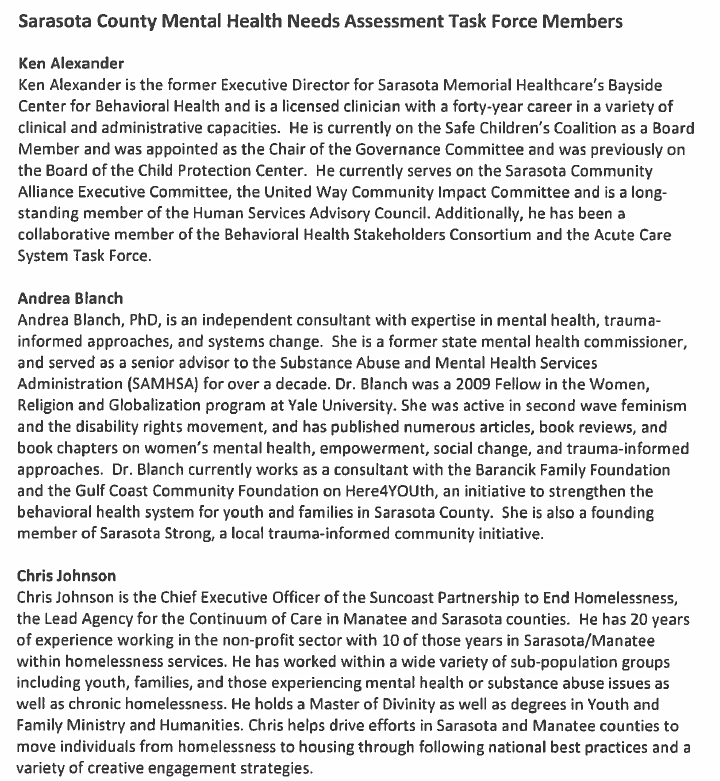 The group is working on a schedule that calls for the members to provide the commissioners a report by November, Henry said. That will include a priority ranking for services under the aegis of the district.

Commissioner Moran pointed to Section 3.01(C) of the ordinance, which allows the commissioners — as the board overseeing the special district — to appoint advisory boards and committees to assist them.

“Let’s say we loved the task force board,” Moran continued. The commissioners could appoint the members of that group to such an advisory board, he added. Then, if the county ends up with a certain amount of the new state funding for mental health and substance abuse services, “Those subject matter experts would help us decide how to spend it.”

“Those things are all possible,” Henry responded. However, he continued, he was not certain that members of the task force would be willing to take on a longer term of service on an advisory board.

A final round of community support before the vote

Prior to the board members’ vote on the ordinance, three speakers urged them to approve the Mental Health Care Special District.

Among them, Dr. Washington Hill of Sarasota, an obstetrician, talked of some of his patients’ needs for the services the district has been designed to deliver. “We would appreciate a positive vote,” he added.

Former County Commissioner Jon Thaxton, representing the Gulf Coast Community Foundation in Venice, which he serves as a senior vice president, told the board members, “I have learned the age-old lesson of not snatching victory from the jaws of defeat.” Having gathered, from listening to their discussion, that they would approve the ordinance, Thaxton noted, he had left his 5 minutes of prepared comments at his seat.

The last speaker was Scott Eller, CEO of Community Assisted and Supported Living Inc. (CASL) of Sarasota, who talked of his enthusiasm for “keeping dollars local.”

CASL provides permanent supportive housing for formerly homeless individuals, Eller added. “We’re seeing a dramatic reduction in recidivism.” Even with the COVID-19 pandemic, Eller pointed out, 92% of those who secured housing have remained in it.

He cited the work of a number of other service providers, including First Step and Centerstone, which contribute to “a wonderful system of care.” The new district, he added, will be able to respond to community needs.