County Commissioner Detert only board member to raise concerns, expressing desire not to create problems akin to those in SANCA agreement forged years ago

It took just under 30 minutes on Oct. 24 for the Sarasota County Commission to vote in full support of a “term sheet” that lays out the process for 11.45 acres of county property at Nathan Benderson Park to become the site of a $130-million Mote Marine Laboratory Science Education Aquarium.

If all goes as planned, the board will be voting again by Jan. 30, 2019 on an omnibus agreement, incorporating a lease up to two years that could lead to Mote’s purchase of the site for $100. That sale is predicated on the nonprofit’s raising all the funds for the new aquarium and achieving the proposed rezoning of the land to make the facility possible under private ownership, Assistant County Administrator Brad Johnson emphasized.

If the conveyance of the property does not prove the appropriate course, Johnson explained on Oct. 24, then Mote would be able to lease the land for an initial 40 years, with the option of five, 10-year renewals, for a total of 90 years.

The short-term lease would require Mote to pay the county $100 per year.

No amount is specified in the event the long-term lease option takes effect. Under the guidelines of that agreement, Mote would be responsible for any taxes and assessments on the property, though in its capacity as a nonprofit organization, the term sheet says.

A number of issues will need to be addressed before the omnibus agreement is ready for the board, Johnson pointed out. Among them will be Mote’s pursuit of a parking study, at county request.

Johnson also explained that if the commission agrees to execute the short-term lease, Mote will have 90 days to submit the necessary petitions that could lead to the rezoning of the property, to make it possible for the aquarium to operate on private land. Assuming the rezoning were accomplished, he added, and Mote had obtained full funding for the aquarium, then the county would have 30 days to convey the property to Mote for $100.

The land could be used only for the aquarium, Johnson explained, and the facility could be operated only by Mote or one of its wholly owned subsidiaries.

A number of questions

Chair Nancy Detert was the sole commissioner to voice any concerns about the term sheet.

After Johnson noted that Mote leaders would have to work out issues with Benderson Development Co. and the Suncoast Aquatic Nature Center Associates (SANCA), as well as Florida Power & Light Co., Detert sought clarification.

“So SANCA and Benderson — it’s almost the same thing,” she said. Why would Mote need to negotiate with both of them, she asked.

SANCA manages Benderson Park, Johnson replied. Mote would have to work out details with SANCA regarding issues in SANCA’s agreement with the county, he added.

For example, Johnson continued, Mote will need to work out with SANCA which organization will manage the land Mote will lease.

“Why?” Detert asked. “We still own the property.”

Then County Administrator Jonathan Lewis explained that, under the county’s agreement with SANCA, that organization is “entitled to exclusive use of the property outlined in the lease.” Thus, Mote will need to address that with SANCA, Lewis said.

Nonetheless, Lewis told Detert, “Ultimately, you as a board have to approve any modifications [to the SANCA agreement].”

Detert indicated that as long as the county maintained ownership of all the property under the lease option, she would find that agreeable.

However, she continued, “The original Benderson Park deal was very similar to what’s going on with Mote. It was ‘Rush, rush, rush; we’ve got to get it done to qualify for World Rowing …’”

She was referring to county negotiations and agreements with the establishment of SANCA as the county worked — in collaboration with Manatee County leaders — to try to win the bid for the 2017 World Rowing Championships.

The agreement that resulted in that case, Detert pointed out, “kind of got slapped together, and we’ve had to sort it out ever since. … I don’t want to get into another one of those deals.”

Detert noted that Sarasota attorney John Patterson, representing Mote Marine, was in the audience. “You’re dutifully listening to this conversation,” she told him.

Part of the due diligence in the process will include the standard title search and survey, Johnson explained.

Being able to review the resulting documents, Detert responded, should ease her concerns. “I just like truth in advertising and clarity and delineation of duties.”

“I think some of this … did happen quickly,” Commissioner Alan Maio said of the Mote term sheet’s preparation. Nonetheless, he continued, he felt staff had “set out enough time between the individual pieces for the things to happen,” including the due diligence.

As the board prepared to vote on Commissioner Michael Moran’s motion to approve the term sheet, Detert did emphasize her excitement about the project. “I think the public is just going to go wild for the design,” she said, noting the “huge ‘Wow’ factor.”

“I think we’re going to have to end up building a scenic overlook on I-75,” Detert added, “because people are going to want to pull over” after passing the aquarium and saying to themselves, “What the heck was that?”

She did not want her previous remarks to be perceived “as obstructionism,” she said. “And I have every confidence that Mote can raise the money to build the building.”
In making his motion, Moran called the aquarium “a legacy project for Sarasota County.”

County Administrator Lewis also took the opportunity of the Oct. 24 discussion to recognize a number of staff members, including County Attorney Stephen DeMarsh; Assistant County Attorney Joshua Moye; Matt Osterhoudt, director of the county’s Planning and Development Services Department; and Michele Norton, manager of the county’s Planning and Zoning Division. He noted that they had “dropped everything” at the commission’s direction on Oct. 9, in the effort to conclude the term sheet for presentation on Oct. 24.

Moran also offered his “huge thank you to staff” for working within “incredibly tight time constraints.”

Understanding the area in question 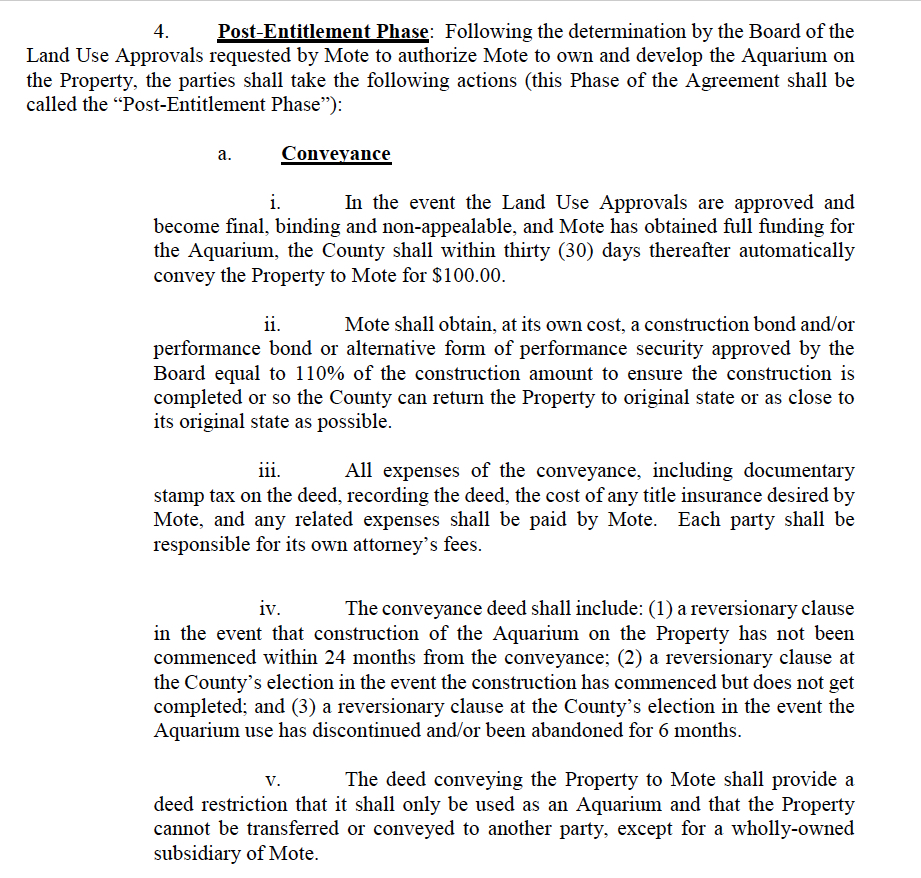 At the outset of the discussion, Nicole Rissler, interim director of the county’s Parks, Recreation and Natural Resources (PRNR) Department, showed the commissioners a map depicting the area at the heart of the deal.

She noted the three lakes north of Cattlemen Road, which runs alongside Benderson Park. The site Mote wants, she continued, “historically has been used for large event parking.” Circus Sarasota also has used the area for the past several years as the site of its show during high tourist season, she added.

One big question during the discussions with Mote, Rissler said, focused on who would maintain the three lakes. The bodies of water on the east and west, she noted, are stormwater ponds connected under the middle lake, which, in turn, is connected to the primary rowing lake within Benderson Park.

Moreover, Rissler explained, county staff has promoted the connectivity of Benderson Park to the adjacent area, including the Mall at University Town Center, with an emphasis on walking and biking. One pedestrian walkway goes under the bridge on Cattlemen Road, she added. “We need to make sure that there’s still good connectivity and safe [areas] for individuals to come down the sidewalk [and continue under the bridge].”

On another critical point, Assistant County Administrator Johnson pointed out that 50 parking spaces in the southernmost section of the parking area for Mote will be dedicated to exclusive county use for park activities.

The playground in Benderson Park, Rissler noted, “is very, very busy. It’s very popular.” Because of that, she continued, and because of the restrooms near the playground, members of the public prefer to park in that area, which is close to where those 50 spaces will be developed.