Editor’s note: This article was updated on the afternoon of July 24 to correct information about Selby Gardens’ grant.

The available funding is lower than the total for the current fiscal year, as a result of the economic downturn produced by the novel coronavirus pandemic.

Nonetheless, 39 organizations in Sarasota County will benefit from $1,669,300 in Tourist Development Tax (TDT) revenue allocated to arts and cultural programs expected to draw visitors to the community in the 2021 fiscal year.

On July 8, the Sarasota County Commission unanimously approved a recommendation of its Tourist Development Council to award the funds.

One of the recipients will split its money between two programs, Jim Shirley, executive director of the Arts and Cultural Alliance of Sarasota County, explained during a presentation to the commission.

Altogether, he reported, 42 organizations applied for grants; one of those proved to be ineligible, so it withdrew.

Three of the recipients, he added, are first-time winners of the funding.

The organizations’ original requests added up to $2,244,113, Shirley said. After scoring adjustments by the members of the panel that reviews all the applications, he continued, the total award amount was determined to be $2,172,939. Then the adjustment was made for the reduction in TDT revenue, Shirley noted. The $1,669,300, he said, represents about 77% of the total of the original requests.

The scores the panelists gave the applications ranged from 86% to 100%, he added. All of the proposals won recommendation for approval, he said.

With a nod to the controversy that erupted several years ago over the fact that the vast majority of the grants traditionally had gone to North County organizations, Shirley also pointed out that South County allocations for the 2021 fiscal year add up to $253,974, or about 15% of the available funds.

That figure includes support for the Chalk Festival, which has had events mostly in Venice over the past few years.

As for determining the South County boundary: Shirley explained that any organization based south of Blackburn Point Road is considered to be in South County.

Then Shirley told the commissioners that the benchmark the National Assembly for State Arts Agencies has set for success in communities is for tourists to make up 30% of the attendees at arts and cultural events. The Arts and Cultural Alliance has projected that the number of visitors attending programs that won Sarasota County grants for the 2021 fiscal year will represent 62% of the total attendees, he said.

“The arts are a major influence on people coming here,” Shirley added. “We hope we can all continue to work together,” he continued, to achieve that level of success in FY 2021.

After the pandemic began, he noted, his office acquired a software package called GoToMeeting — “much like Zoom,” he said — that the Alliance has made available to all the arts and cultural organizations at no charge so they can conduct their board meetings remotely.

“It’s worked out very, very well for us,” he said.

Commissioner Nancy Detert made the motion to approve the grants, as recommended, and Commissioner Charles Hines — who chairs the Tourist Development Council — seconded it.

“Thanks for adjusting to the new numbers and doing the best you can,” Detert told Shirley. “We always consider ourselves the ‘Cultural Capital,’ and we’d like to keep doing that.”

Still addressing Shirley, she added, “Thanks for hanging in there, keeping everybody cheerful and working the best they can.”

A sampling of program notes

Charts provided to the board members in advance of the meeting provided details about the information the applicants submitted to the Alliance. For example, The Sarasota Orchestra said its 2020-21 season would feature “five unique series”: Masterworks, Pops, Great Escapes, Chamber Soirees, and Discover Mozart. “The variety of music programming and concert formats intend to engage, educate and enrich a wide range of audiences and enhance the cultural vibrancy of Sarasota,” the proposal said.

For a second example, the Jazz Club of Sarasota, which presents programs at a variety of venues, including Phillippi Estate Park on South Tamiami Trail in Sarasota and the City of Sarasota’s Municipal Auditorium, will use its grant — $17,669 — for its 41st Sarasota Jazz Festival. The theme, the document said, will be Swingin with the Stars.

Sarasota Contemporary Dance won funding — $31,832 — for its Main Stage Season, Quinceanera, which will be a celebration of its 15th birthday, the chart pointed out.

Yet another recipient is the Sarasota Pops Orchestra ($11,528), which will use its award for its 45th concert season, POPular Opinion: That’s Entertainment. It presents its programs at the Riverview High School Performing Arts Center in Sarasota.

The Circus Arts Conservatory, which holds its shows on a site at Nathan Benderson Park, will use its grant — $71,723 — for its 25th season of European-style performances in the one-ring Ulla Searing Big Top, the document noted.

Marie Selby Botanical Gardens will receive $73,202 for its 2020-21 season at its facilities near downtown Sarasota, the chart said. Its major exhibition this season was Salvador Dali: Gardens of the Mind, which ended on June 28. 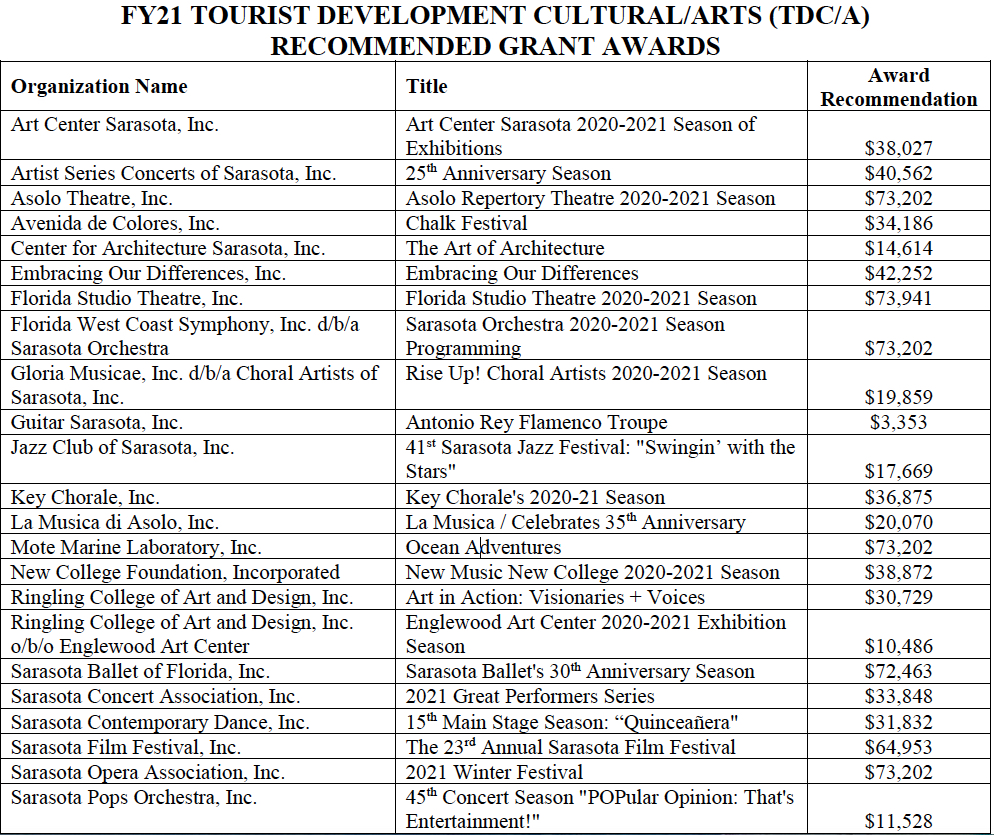