On the morning of Feb. 9, the Sarasota County Commission voted unanimously to send a letter to Gov. Ron DeSantis, pointing out that the county has the second highest percentage of residents age 65 and up in the state. The commissioners encouraged state leaders to “keep that in mind” in allocating COVID-19 vaccination doses to counties.

Before the vote, Commissioner Ron Cutsinger pointed out that an extra 150,000 residents from other states who typically live in the county three or four months each year also would be eligible, by age, for vaccinations.

“That letter will go out over my signature,” Maio added after the 5-0 vote. (As of early afternoon on Feb. 10, the letter had not been drafted, Kim Francel, the county’s Public Records Division coordinator, told The Sarasota News Leader.)

Commissioner Christian Ziegler, who is vice chair of the Republican Party of Florida, first proposed sending the letter to Jared Moskowitz, director of the Florida Division of Emergency Management, which has been handling the vaccine distribution process in the state. (State Sen. Joe Gruters, who is the chair of the state party, also lives in Sarasota. DeSantis is a Republican, as well.)

During county Health Officer Chuck Henry’s COVID-19 update to the commissioners, Ziegler had asked how Henry perceived the supply coming into the county, in comparison with doses provided to other Florida counties.

Although Sarasota County consistently had been getting vaccine, Henry replied, “We should probably receive more vaccine,” based on the number of eligible residents.

Nonetheless, Henry said, he understood that state officials have a complex process in place to help them determine allocations.

Shortly before 7 p.m. on Feb. 9, just hours after the vote, county staff announced that the Florida Department of Health in Sarasota County (DOH-Sarasota) had been advised that the state would sponsor a South County drive-through, pop-up first-dose clinic at the Venice Community Center.

“The state will be using the county’s [Everbridge] registration database to send out these appointment notifications,” county Media Relations Officer Brianne Grant wrote in an update to members of the news media. “Appointments are selected by account number,” she continued; they would not be based on zip code or a resident’s location in the county.

During a county YouTube video filmed on the evening of Feb. 9, Sarasota County Health Officer Chuck Henry explained that state officials had informed DOH-Sarasota that they would provide 1,000 doses for Venice clinics for each of three days: Feb. 10, 11 and 12. He called the state plans “very exciting news.”

With the county already having been provided 7,000 doses for clinics at its Sarasota Square mall site for this week, the county COVID-19 vaccination webpage noted early in the afternoon of Feb. 10 that DOH-Sarasota was scheduling appointments up to number 15,960 in the Everbridge registration system. (Each account has a number, county staff has explained, but as many as 50% of the accounts in the system contain a second person, such as a spouse.)

Outside the Venice Community Center on Feb. 10, where tents were set up for the drive-through clinic, Gov. DeSantis announced that he was boosting DOH-Sarasota’s weekly vaccine allocation from 3,300 to 7,000.

Diving into data, realities and possibilities

At the outset of his Feb. 9 presentation to the commissioners, Health Officer Henry provided COVID-19 data as of Feb. 8. The total number of cases reported in the county since March 2020 was 25,573. Altogether, hospitalizations of patients added up to 1,192, and 675 deaths had been recorded.

The number of deaths linked to long-term care facilities was 348, Henry added.

Over the past 14 days, the county’s positivity rate had dropped to 4.82%, he continued, and that keeps trending down.

As of Feb. 8, he noted, 75 COVID-19 patents were being treated in the county’s acute care hospitals, with 17 in intensive care unit beds.

“Over the summer,” Henry pointed out, “we peaked at about 168 [patients in hospitals], so it’s great to see that coming down.”

(The report released by the Florida Department of Health in Tallahassee a day later, reflecting data gathered through Feb. 9, showed the total number of county cases was 25,700, with 1,206 hospitalizations.)

During his Feb. 9 remarks, Henry stressed the need for county residents to remain cautious. “There’s still virus in the community.”
Persons should continue to practice social distancing and wear masks when they cannot ensure they will be able to do so, Henry said. Frequent and thorough hand washing also is vital, he noted, along with keeping surfaces clean.

Further, Henry told the board members that about 75% of all the doses delivered in the county had gone to persons 65 and older, along with frontline health care workers.

In response to a question, Henry said that, “according to the latest data,” the county has approximately 160,000 residents 65 and older. About 24% of those had been vaccinated thus far, he added.

Answering another question, Henry said that he anticipates getting a directive soon from the state’s Surgeon General, or seeing an Executive Order from Gov. DeSantis, explaining the next tier of persons who will be eligible for shots. Henry added that, based on other states’ protocols, he would expect that next group to include teachers, law enforcement officers, public transportation drivers “and maybe grocery store workers.”

In response to another question, Henry noted that all firefighters in the county who have been cross-trained as emergency medical technicians or paramedics were allowed to get vaccinated in the first group of eligible persons, because those firefighters also handle medical emergencies.

When Commissioner Nancy Detert asked for clarification about whether state doses going to Publix stores for vaccinations dilute the number going to the county health departments, Henry said that had been the case.

Last week, however, the Biden Administration announced the launch of the Federal Retail Pharmacy Program for COVID-19 Vaccination. As a result, the Tampa Bay Times reported, “More than 20 different retail pharmacies are participating in the initial rollout of the program nationwide.”

(Gov. DeSantis pointed out on Feb. 9 that Publix and Walmart stores are among those chosen to receive doses through the federal program. Henry alluded to that news during his Feb. 9 update to the County Commission.)

Publix stores in Sarasota County will be providing vaccinations, the company’s website says. The first appointments were claimed, the company pointed out. It advised interested, eligible persons to check back on Friday, Feb. 12, after 7 a.m. for the next registration opportunity.

During the Feb. 9 discussion, Commissioner Ron Cutsinger told Henry, “I was quite surprised” when the state announced a couple of weeks ago that its registration system would be going live. “I think it created a lot of confusion.”

“We’re encouraging citizens to stay in the [county’s] Everbridge system,” Henry told Cutsinger. Ultimately, Henry continued, as he understands the process, any Sarasota County resident who signs up in the state system is listed on a type of “spreadsheet” — for lack of a better word, Henry noted — and the person’s name can be added into the county registration system. However, he pointed out, those names would go at the end of the county list.

(Just after 11 a.m. on Feb. 9, county Media Relations Officer Grant noted in an email blast that the number of accounts in the county system was above 128,500. “Actual number varies due to duplicates and second-person sign-ups,” she added.)

Henry told the commissioners that he and his staff are asking that county residents who have received their vaccinations elsewhere delete their accounts in the Everbridge system.

He added that “it doesn’t hurt” for a person to register in Sarasota, Manatee and Charlotte counties, as well as on the participating drug store websites.

Yet, one issue with which DOH-Sarasota recently has had to contend, Henry explained, has been the fact that “20% or so” of people notified about appointments fail to decline them or simply do not show up for them. “We’re now overbooking to try to compensate for that.”

If a person is notified three times about an available appointment and declines it each time — or if the person says each time he or she is not available — the person’s name is moved to the end of the county list, Henry pointed out.

“Here’s the reality of what’s going on,” Commissioner Michael Moran told Henry: “People are literally sitting on their computer and enrolling in every single [system] they can possibly get their hands on, all over the state.”

Moran added that he knows of county residents who received a call that they could get appointments northeast of Orlando, in a location about three hours away, and the residents drove up there to take advantage of the opportunity.

Moran asked whether Henry gets a notification of those persons as having been vaccinated, even though they received their doses out of the county.

The vaccination numbers for each county come from the state, Henry replied, adding that he believes state workers sort data by zip code. Therefore, Henry said, any Sarasota County resident who has been vaccinated — regardless of where that took place — is added into the Sarasota County total. 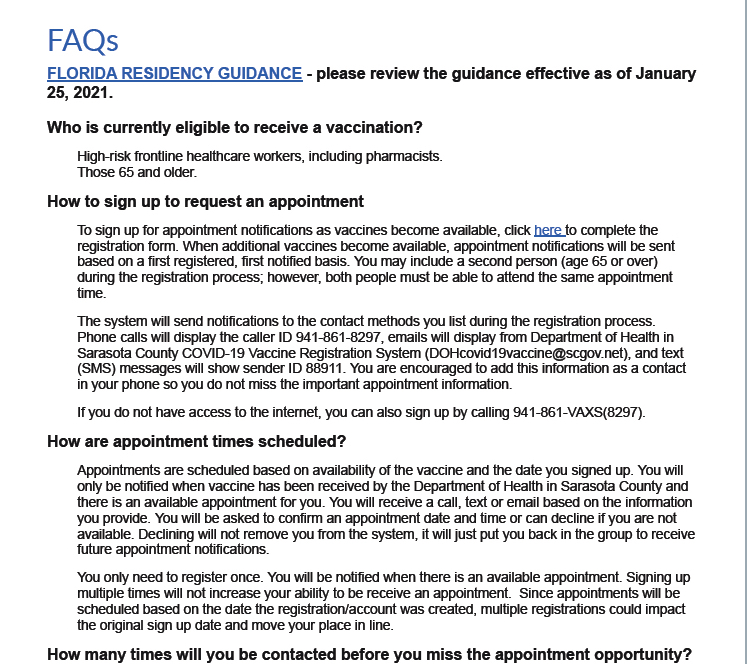 On one other related point, Chair Maio pointed out, “I still get hit” with email allegations that “somehow commissioners are jumping the line.” Maio added, “You have three commissioners that are over 65; two are over 70. … None of the commissioners and/or their spouses has been vaccinated, period.”

In fact, Maio continued, his registration number — if he remembered it correctly — is 58,716.