With a few tweaks prompted by their suggestions in July, the Sarasota city commissioners on Aug. 19 unanimously approved an ordinance that will prohibit the use of polystyrene on city-owned property.

Additionally, plastic drinking straws will be allowed only upon a person’s request.

Businesses that utilize the city’s sidewalks for food and beverage service will have to comply with the new regulations as of Jan. 1, 2020.

Companies that lease city property will not have to abide by the new ordinance until they renew those leases, city Sustainability Manager Stevie Montes-Freeman explained on July 15. Some leases might not be renewed for 10 years, for example, she added.

For special events on city property, the ordinance will go into effect in August 2020, a year after the second reading, “so there would be a full year of education,” Montes-Freeman told the commissioners last month.

Additionally, the regulations will not go into effect until August 2020 for those holding commercial vending and right of way use permits, the ordinance notes.

One exception to the polystyrene ban — requested by Commissioner Shelli Freeland Eddie earlier this year — allows for the use of such products during gatherings of no more than 50 people in a city park.

In July, Commissioner Hagen Brody asked what penalty the city would impose on businesses that violate the ordinance.

City Attorney Robert Fournier replied that the city could withdraw a sidewalk café permit, for one example. In most situations, he suggested, the violation would be considered a Code Enforcement Division issue, so the Special Magistrate hearing a case could impose a fine, as warranted.

The city also could refuse a subsequent permit to the organizer of a special event if violations of the regulations occur during such an event, Freeman-Montes explained. 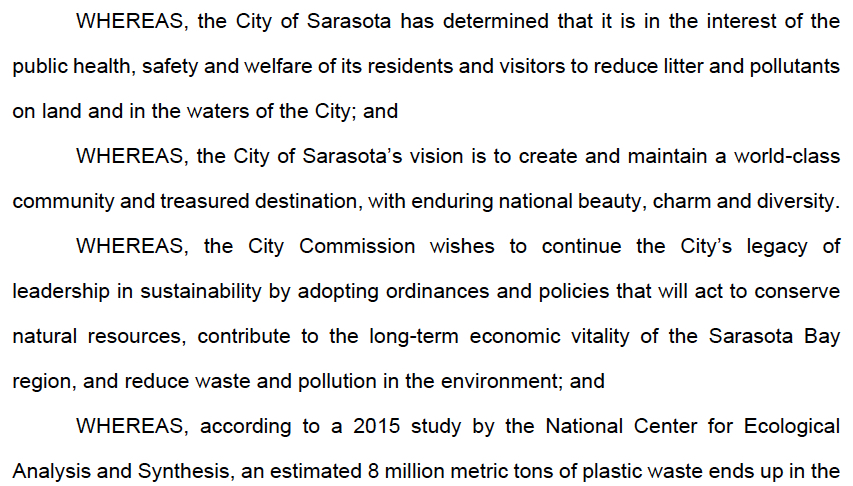 On July 15, before the commission voted unanimously to approve the ordinance on its first reading, Freeman-Montes said that if the new regulations won final approval in August, she would spend the rest of the year on outreach, educating business owners with sidewalk café permits.

In July, she and Jeff Vredenburg, the Sustainability Program manager, told the board members that they had met with owners or managers of 47 businesses that would be affected by the regulations; they had sent a mailer to 45 sidewalk café permittees; and they had hosted an event for more than 30 food and beverage providers “to relay information and receive feedback,” as a staff memo in the Aug. 19 agenda packet put it.

Before the board members voted on the ordinance last month, they asked staff to modify the wording of three specific areas of the document.

Much of the discussion focused on the proposed requirement for food service vendors to keep both plastic and non-plastic straws on site.

Commissioner Brody objected to making businesses keep both plastic and paper straws on hand, noting the use of the word “shall” in that section. “I just think it’s a little strong, legally.”

Freeman-Montes responded that comments city staff received from disabled people and advocates for the disabled were clear regarding the need for straws to be available upon request. She had pointed out in an earlier discussion with the board that disabled people did not want to draw unwanted attention to themselves by having to explain why they wanted straws.

“I think you have to include paper straws,” Mayor Liz Alpert said on July 15. “If you’re going to be giving out straws, you give paper unless they specify plastic.”

Alpert added that she felt staff could make it clear in the ordinance that if a business does not give out straws, it does not have to keep them available.

City Attorney Fournier suggested that staff could modify the proposed ordinance to reference “beverage providers” instead of “food service providers.”

As the discussion continued, Freeman-Montes reminded the commissioners that staff outreach determined the need for any business that serves beverages to keep plastic straws on the premises. “That was a very clear ask.”

When Freeman-Montes proposed the deletion of the reference to non-plastic straws as an option, Alpert again objected.

“We’re making this way harder than it needs to be,” Commissioner Shelli Freeland Eddie said.

“I think we should encourage everyone to use the non-plastic straws,” Alpert maintained.

“This is going to be really impossible to enforce,” Brody pointed out, reiterating his objection to making a business owner buy two sets of straws.

Finally, Commissioner Willie Shaw said he doubted the business owners would care much, because they “buy everything in bulk anyway.”

Freeland Eddie then proposed that the non-plastic straw alternative remain in the ordinance. She also made the motion to approve the regulations on first reading, with the other minor changes her colleagues had proposed to be made before the second reading; one of the modifications was the correction of a typo.

In a memo provided to the board members ahead of the Aug. 19 meeting, staff wrote that it had kept the definition of food service providers included in the document the commissioners saw in July. That decision, the memo said, was a result of the use of “food service providers” in other sections of the ordinance. However, staff did reword two paragraphs, the memo continued, in the effort to capture the commission’s direction to ensure the straw regulations apply only to beverage providers.

The final paragraph of Section 16-61 of the new ordinance says, “Notwithstanding the foregoing, the above persons shall provide, or allow the use of, single-use drinking straws if specifically requested by any customer or person. All food service providers regulated hereunder who provide beverages shall keep both non-plastic and plastic single-use drinking straws available at all times at their food service establishment for such requests.”