On a unanimous vote on May 10, the Sarasota County commissioners agreed to dedicate $20 million from the county’s Tourist Development Tax — or, “bed tax” — revenue to the construction of a boathouse and indoor sports complex at Nathan Benderson Park.

Commissioner Nancy Detert did press Nicole Rissler, director of the county’s Parks, Recreation and Natural Resources Department, for more details about the overall expense of the project before joining her colleagues in supporting it.

The $20 million will come out of revenue from the sixth penny of the bed tax, which will be charged beginning on Oct. 1, the first day of the 2023 fiscal year, Rissler pointed out. Before the commissioners voted unanimously on April 26 to approve that extra penny, staff proposed that 70% of the proceeds go toward construction and improvement of public amenities.

Rissler told Detert this week that each penny of the Tourist Development Tax (TDT) typically has been generating approximately $5 million per year. However, Rissler noted, the TDT collections this fiscal year have been running higher than usual. (See the related article in this issue.)

Further, Rissler said that the boathouse itself likely would cost $10 million. Until more research has been undertaken, Rissler added, it would be impossible to put a definitive price tag on the indoor sports complex, which would be built atop the boathouse. Nonetheless, Rissler continued, staff believes the sports complex will run “about $30 million.”

That estimate derives partly from an analysis of comparable structures, including the Wiregrass Ranch Sports Campus of Pasco County, which is in Wesley Chapel, she said.

Moreover, Rissler noted, staff’s recommendation is that any funds needed for the project in excess of the $20-million county commitment come from “private donations, naming rights, sponsorships” and other sources.

County staff would issue a bond for the $20 million, Rissler pointed out, which would be repaid with the TDT revenue.

In response to a Sarasota News Leader inquiry about a concern about issuing bonds for the project, the Office of the County Attorney provided this statement via email on May 12: “Any future borrow for an indoor sports complex/boathouse would comply with the limits provided by the [Sarasota County] Charter. The indoor sports complex/boathouse is a separate project and is not part of a single, simultaneous or concurrent undertaking that was divided [and] designed to avoid the limitations of Section 5.2D of the County Charter. The past initial park development and improvements to Nathan Benderson Park began over close to 10 years ago.” 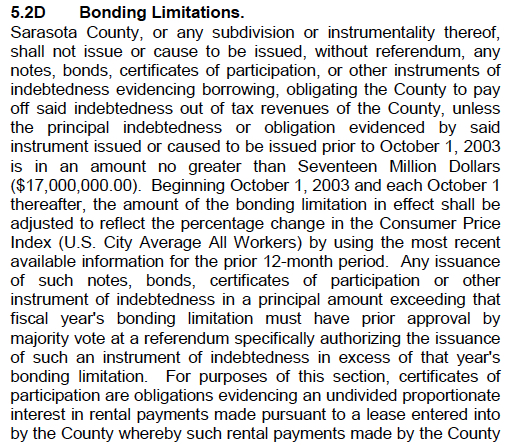 When Detert asked Rissler about the annual debt service on such a bond, Rissler responded that it likely would be $1.2 million.

With the new facilities in place in the county-owned park, Rissler also explained that a new agreement would have to be forged between the county and the Nathan Benderson Park Conservancy, which manages the park on behalf of the county, including the handling of events. (The Conservancy is the organization that used to be known as the Suncoast Aquatic Nature Center Associates Inc., or SANCA.)

Replying to another question from Detert, Rissler explained that the Conservancy keeps any funds left over each year beyond what the county pays it and what it takes in in the form of event revenue. The proceeds are to be used for park management purposes only, Rissler noted.

“Well, I look forward to that contract,” Detert replied, referring to the new operating agreement with the Conservancy after the boathouse/indoor sports complex has been completed.

Earlier, Detert alluded to her history with SANCA when she was a member of the Florida Legislature and the nonprofit was seeking state funding for amenities at Benderson Park.

Other board members praised members of the Benderson family, with Commissioner Michael Moran calling them “big thinkers and very visionary.”

Referring to the site of the park, Moran stressed, “This was an empty hole in the ground as a borrow pit. … What an asset this has become to the community,” providing “massive” economic impact each year.

Chair Alan Maio talked of negative emails the board members have received about the park through the years.

“What we forget is the big contribution to the Finishing Tower” that the Benderson family made, Maio pointed out. “It’s our park and our Finishing Tower.”

The Benderson Family provided more than $5 million so that facility could be constructed prior to the 2017 World Rowing Championships at the park. New Conservancy board Chair Michael Taaffe pointed out that the international organization that governs world rowing — FISA — would not certify Benderson Park for major rowing events until that tower was in place. The building holds the timing equipment and space for the referees, among other features.

Maio also noted that the commissioners worked with county staff to plant trees along the trail on the east side of the grounds, in response to public complaints about the lack of shade at Benderson Park. The Conservancy came up with the money for the irrigation system for those trees, he emphasized.

“I would ask the people who have a kneejerk reaction to just take a breath, visit [the park],” Maio added.

Past and future planning

During his remarks to the County Commission on May 10, Taaffe noted that he has been chair of the Conservancy since September 2021. “I made a commitment that we will break ground on a boathouse on this island before my term is up [in September 2023],” he said.

“We already committed to building the boathouse,” he continued. “We were derailed because of the 2017 World Rowing Championships. … We had to build a Finish Tower first. … So we put aside the boathouse for the sake of the Finish Tower.”

Then the COVID-19 pandemic ensued, Taaffe pointed out. “We had a lot of roadblocks. Now we are on track …”

Stephen Rodriguez, interim CEO and chief operating officer of the Conservancy, explained that county staff asked the 501(c)(3) nonprofit to commission a feasibility study for the indoor sports complex after the commissioners made that facility one of their top priorities for 2022.

The team with Johnson Consulting, the Chicago-based firm that won the bid, interviewed stakeholders — including staff of Visit Sarasota County, which is the county’s tourism office; representatives of the Bradenton Area Convention Center; hoteliers; and event planners, among others, he said.

The firm also studied market demand, other facilities that potentially could compete with the new boathouse and indoor sports complex, and the financial prospects, Rodriguez continued.

The study found “a significant void of available indoor sports complex space in the marketplace,” a summary of the findings says. Further, Rodriguez told the commissioners, a full calendar of bookings at the facility would be anticipated.

It is likely, he continued, that various sports league players would use the complex Mondays through Thursdays, with tournaments scheduled Fridays through Sundays.

Additionally, Rodriguez talked about the positive projections for return on investment and bed tax revenue, as noted in the Johnson Consulting report, based on similar facilities in other markets.

The study also considered a variety of indoor events that the new complex could host. Among them are basketball and volleyball tournaments, as well as cheerleading, gymnastics, dance and mixed martial arts competitions, the study notes.

Further, Rodriguez pointed out that the report includes four operating models that could be considered for the new facilities at Benderson Park: public, private, public/private, and public/nonprofit.

Finally, he said, the consulting firm predicted an annual economic impact of $20 million just from the indoor sports complex, with more than 30,000 hotel room nights generated each year. “These projections do not consider benefits of the boathouse” or the expansion of current activities at the park, Rodriguez noted.

During his remarks, Conservancy Chair Taaffe ran down a list of events at the park planned for this summer. More than 10,000 athletes and their family members are anticipated for those competitions, he said.

Noting his rowing background, Taaffe also talked of his surprise at the importance of the Dragon Boat events Benderson Park has hosted, with more on the schedule. The International Dragon Boat Federation Club Crew World Championships, set for July 18-24, is expected to bring 3,500 athletes to Sarasota and Manatee counties from 12 different countries, plus family members, he pointed out. “This is a major event.”

Moreover, Taaffe said, Interim CEO Rodriguez has traveled around the world to talk about the park’s ability to host kayaking, canoeing and paddleboarding competitions. “This facility is perfect for that. … These are world championships,” he added.

During the board discussion, Commissioner Moran said at one point, “What an asset this [park] has become to the community,” with the resulting Tourist Development Tax and sales tax revenue proving to be “just staggering.”

“This is an incredible vision to expand what this park means,” Commissioner Ron Cutsinger added. It is second only to Siesta Public Beach, he said, in terms of its economic impact on the county.

“Not only are we talking about the sports tourism [potential, with the new facilities],” Cutsinger continued, “but there’s a huge gap in services … that we have in our own community.”

No complex exists where large tournaments and competitions for young people can be held, he noted.

Yet, even a close member of his own family, Ziegler continued, recently had talked about all of the events and other activities at Benderson Park. In the past, Ziegler said, that family member had been critical of the park.

Additionally, both Ziegler and Cutsinger noted the fact that Mote Marine Laboratory will build its approximately $130-million Science Education Aquarium at Benderson Park, and a new Pop Stroke miniature golf complex is located at 195 University Town Center Drive, near the park.

Building the boathouse and the indoor sports complex, Cutsinger said, “opens the door to extraordinary possibilities.”

Cutsinger made the motion to approve the $20 million out of the new bed tax revenue, and Ziegler seconded it.

Saying she recognized the need for the facilities, Detert said she would support the motion, pointing to “all [the] positive steps [following] what started off years ago as a shaky relationship and has evolved into a very comfortable business partnership.”

1 thought on “County commissioners fully in support of $20 million allocation for Benderson Park boathouse/indoor sports complex, with funding to come out of ‘bed tax’ revenue”