Commissioners Maio and Moran voice concerns about necessity of hiring a firm to undertake ‘fiscal neutrality’ review, as required by county Charter

A decision made by Sarasota County staff more than 15 years ago sparked county commission consternation on Feb. 9, with the board members facing an April 1 state deadline for action.

If staff cannot meet that deadline, county Planner Elma Felix told the commissioners, then state law would necessitate that county staff “pause the intake of Comprehensive Plan amendments” until after the staff work has been finished.

“We can’t have a situation where folks’ Comprehensive Plan amendments are stalled in place because we didn’t get this done,” commission Chair Alan Maio said on Feb. 9.

What Maio was referring to was a fiscal neutrality analysis of the county’s Future Urban Area for an amendment to be included in a state-mandated update of the county’s Comprehensive Plan.

As a county staff memo explained the situation, “The Future Urban Area was due for review in 2005. During the 2006 [county] Comprehensive Plan update, the review was further extended another 10 years to 2015. … Initial indications are that recent annexations and development activity within the area may have already changed its entitled character to be like much of the existing Urban Service Area.”

The Urban Service Area is that portion of the county where infrastructure exists to serve residential and commercial development.

Because of the COVID-19 pandemic, the staff memo continued, “challenges have arisen resulting in reduced public participation and engagement on this important growth management issue, and there is a need to better address the issue of fiscal neutrality,” given the Charter language.

Yet, on Nov. 5, 2020, the county’s Planning Commission recommended that the Future Urban Area amendment be among those the County Commission is scheduled to adopt on April 1. It would be included in the revisions of the Comprehensive Plan necessitated by a state-mandated review of county Comprehensive Plan policies every seven years.

Planner Felix, who has been leading the Comprehensive Plan Update Team, told the commissioners on Feb. 9, “Of course, staff is going to work as expeditiously as humanly possible to get this [other amendment] done before April 1, 2021.”

She was addressing the board during its public hearing on the proposed Comprehensive Plan revisions.

Ultimately, the commissioners voted 5-0 to transmit the other changes to the state’s Department of Economic Opportunity (DEO), which must review all of them before the commission can adopt them.

A Next Steps slide Felix showed the board members said staff would submit drafts of the Future Urban Area amendment to the Department of Economic Opportunity as the work proceeds.

“How realistic is it that you’re going to get [this amendment] done?” Chair Maio asked Felix.

At that point, Matt Osterhoudt, director of the county’s Planning and Development Services Department, stepped to the podium to respond.

Delays could be possible because of the consultant and because of Department of Economic Opportunity action, he added.

The origins of the Future Urban Area

A December 2020 county staff document regarding the Future Urban Area Comprehensive Plan amendment explained, “In 1996, a unique land use category identified as the ‘Future Urban Area’ was designated on the [county’s] Future Land Use Map to provide an identified placeholder for future urban development in the southern half of the county. … The Future Urban Area was meant to provide additional potential urban land area to accommodate anticipated population growth related demands, beyond the typical 20-year planning horizon. At the time,” the document continued, “accommodating population growth and projecting overall need was a state requirement every 10 years. As initially conceived, the Future Urban Area would be considered for partial or total inclusion within the Urban Service Area if services and utilities have been or could be provided, and a need for additional capacity was found during the county’s periodic updating of its [Comprehensive] Plan.”

The document further noted, “Over the past 10 years, significant municipal annexations and various development approvals have taken place in much of the Future Urban Area. Initial indications are that recent annexations and development activity, within the Area may have already changed its entitled character to functioning like much of the existing Urban Service Area. Roughly 70% of properties within the Future Urban Area have either been granted development rights (such as Villages of Manasota Beach) or are … under development (such as Grand Palm and Sarasota National Golf Club).”

The document also pointed out, “Although the Future Urban Area has been in existence on the Future Land Use Map for over 20 years, its present-day functionality has outweighed its original intent, reserved for ‘future’ urban activity.”

In that December 2020 document, staff laid out its original schedule for handling a publicly initiated Comprehensive Plan amendment this year in regard to the Future Urban Area. The schedule called for public workshops in May, a Planning Commission hearing in August and final County Commission adoption in December.

During the Feb. 9 public hearing, when Chair Maio asked whether staff had a graphic depicting the areas that the consultant would be analyzing for fiscal neutrality. Felix put one up, showing the Future Urban Area lands in yellow.

It appeared to him, Maio said, that most of those sections of the county already had developments underway in them or new communities approved by the commission — or they had been annexed into the City of North Port.

Maio added that he thought only “a tiny wedge” in the southernmost part of the county remained without development. “Why do we need a consultant for that?” he asked.

Felix reminded him of the Charter language regarding fiscal neutrality, “so there’s a particular analysis that has to be done.”

Does the consultant have to analyze all the other portions of the county in yellow, Maio asked again, including the “15, 16, 17 square miles that’s already annexed into the City of North Port and/or already under development, and/or inside a Critical Area Plan that’s been filed?”

The analysis would include all of the lands “that are under the Future Urban Area designation,” Felix responded.

“That may be what the rulebook says,” Maio told her, “but to my dumb self … that’s preposterous, since it’s already under development …”

Then Maio asked how staff could streamline the process.

“Quite frankly, commissioner, I don’t know that there’s anything to be done to expedite the process much further than we’ve already identified,” Felix replied.

Maio then referred to the county Charter language about fiscal neutrality as “that poison pill,” adding, “And now we’re paying the price, again and again and again, unless somebody wants to correct me publicly … I’m just flabbergasted.”

In response to a question from Commissioner Ron Cutsinger, Felix said that staff members told the Planning Commission that they felt they needed significant time “to do the proper analysis,” because the Charter language “is a little vague” in regard to the fiscal neutrality issue. “We wanted to make sure that we were doing our due diligence, not just from the process side but from the public side, as well,” she added, referring to conducting public workshops.

However, Felix indicated, staff ultimately decided to press ahead with the analysis in an effort to incorporate the necessary amendment into the Comprehensive Plan update.

County Administrator Jonathan Lewis told Maio that Osterhoudt and Felix believe the consultant’s analysis can be completed by April 1, even though that was not the original plan.

“What’s important to me is the whole process of this,” Commissioner Michael Moran said. “The obvious question this board will ask on April 1, if this is not done,” he added, is who held it up.

Moran asked for clarification from Felix that work on all other Comprehensive Plan amendments would have to be stalled until the work on the Future Urban Area amendment was completed, if that analysis remained unfinished on April 1. 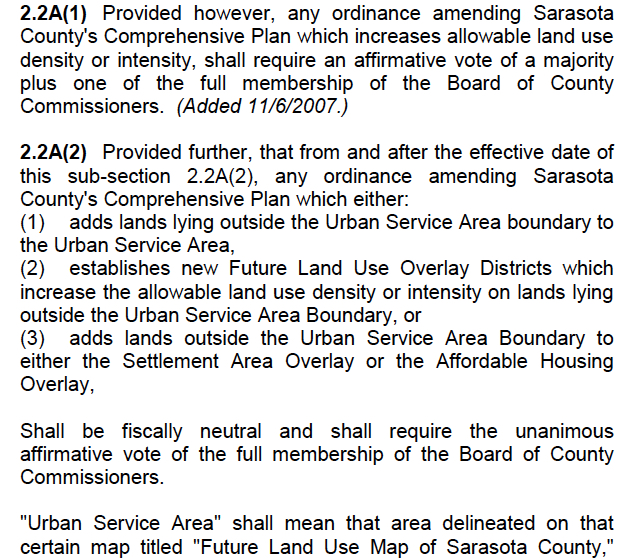 Moran told her that he did not want staff to be responsible for any delay beyond April 1.

“We’re working as expeditiously as possible to secure a consultant,” Felix said. Noting Osterhoudt’s earlier comments, she added, “Some of this is out of our control.”

County Administrator Lewis told the commissioners that he had notified the county Procurement Official that he was willing to do whatever possible, under the applicable laws, to expedite the hiring of the consultant. However, Lewis pointed out, he is not the expert on those laws; the Procurement Official is.

The fiscal neutrality analysis will have to be undertaken, Lewis said, “but some of it should be very, very quick. … If we can get the procurement process out of the way,” he added, “then I think we’ll be OK.”

Addressing Felix, Maio said, “Right now, I will tell you publicly, my eyeballs are melting at how preposterous this situation is.” He again referenced the “poison pill” in the county Charter.

The only speaker during the public hearing was William Merrill III of the Icard Merrill law firm in Sarasota.

Merrill talked about county staff ‘s “kicking the can” of the Future Urban Area review down the road in years past.

He, like the members of the Planning Commission, had pushed for the analysis to be part of the Comprehensive Plan review and update, Merrill added.

Concurring with earlier comments Maio had made, Merrill said fiscal neutrality analyses had been conducted on developments the commission has approved in a number of the segments of the county designated for Future Urban Area. “It’s very few lands,” he added, that remain to be considered.

Moreover, Merrill told the commissioners, he would suggest that the consultant take into account “the fact that all of these [approved communities] have been developed at pretty high prices, and they’re going to be fiscally neutral. … This is not a hard analysis.”