Florida park management plans are revisited every 10 years, and the law requires public input on them.

There was little of that at the hearing. Much of the time was taken up with viewing informational displays staffed by park personnel and then watching a slide presentation tightly orchestrated by Sine Murray, chief of the Office of Park Planning within FDEP’s Division of Recreation and Parks. When people started to ask questions after the presentation, FDEP officials were having none of it.

This was a crowd of informed citizens, passionate about “their” park. Some were unhappy with the proposed harvesting of natural resources such as timber and palm fronds, construction of a $4-million “eco lodge“ in a wilderness area of the park, and building a new interpretive center at Upper Myakka Lake, the already overcrowded concession area. FDEP officials vigorously denied that increasing revenues was the driver of the revised plan.

Because of FDEP’s “divide and conquer” approach, an informed audience did not have the opportunity to hear individual members’ concerns, to learn from those most knowledgeable about the proposed changes, and perhaps even 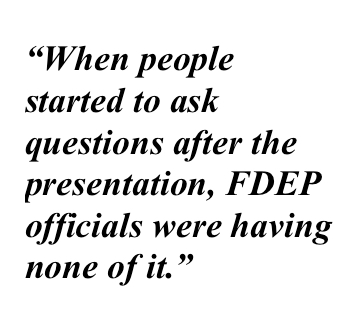 to reconsider the revisions or suggest alternatives. An open mic forum would have fostered all of that. Everyone would have benefited from comments from environmentalist Jono Miller, who had analyzed the revisions and brought handouts; former park naturalist Paula Benshoff, who probably knows Myakka better than anyone else; and folks with years of experience managing Florida’s public lands.

Instead, participants were told to fill out forms and drop them in the “blue box,” email their comments, speak one-on-one to a court stenographer or park official, or attend an advisory board meeting the next day. Angry, disappointed crowd members went home that evening, knowing that they had wasted their time and wondering if the management plan revision was a “done deal.”

The next morning, 12 persistent people who had been at the hearing sat through a three-hour meeting before they finally could ask questions and make comments. All in all, these citizens had expended at least five hours — plus two trips to meeting venues — over a two-day period.

Will all Florida state park management plans be revised with the same “dog and pony show” approach? I sincerely hope not.

The public may view the Myakka River State Park management plan at https://www.fldepnet.org/public notices and send comments by March 16 to FL_StateParkPlanningdep.state.fl.us or “snail mail” them to Office of Park Planning, Florida Department of Environmental Protection, Division of Recreation and Parks, 3900 Commonwealth Blvd. MS 525, Tallahassee, FL 32399-3000.

1 thought on “Divide and conquer: FDEP’s flawed approach to public hearings does not serve the public”