Members of an organization established last summer to fight proposals for two high-rise Siesta Key hotels have launched a campaign to seek Sarasota County staff’s review of those projects — and a third one — in conjunction with each other, instead of handling them separately.

In a recent press release, the Siesta Key Coalition announced that it is calling for the “big picture approach.”

County staff should “study the collective adverse impact of all pending hotel development projects on or near Siesta Key, rather than dealing with these precedent-setting applications one at a time,” the release said.

“Our Sarasota County representatives need to listen to the overwhelming concerns of those that call Siesta Key their home,” the Coalition added. “We need those representatives to lead, bring solutions to traffic and beach challenges, find answers within existing regulations and codes, not open the floodgates to high-rise, transient accommodations that will put at risk what makes our barrier island such an attractive destination.”

Moreover, the Coalition is calling for “a comprehensive vehicular and pedestrian study for all of Siesta Key, especially one contemplating the impact of multiple large-scale hotels, together with the [Siesta] Promenade mixed-use development.” No such analysis ever has been pursued, the Coalition noted in its press release.

As approved by the County Commission in December 2018, Siesta Promenade would include a 130-room hotel, 414 apartments/condominiums, 133,000 square feet of retail space and 7,000 square feet of office space. The project is planned in the northwest quadrant of Stickney Point Road and U.S. 41.

However, last year, after purchasing two single-family homes in the adjoining Pine Shores Estates neighborhood, the developer — an affiliate of Benderson Development Co., Siesta 41 Associates LLP — filed a preliminary application with county staff for a rezoning that would enable the firm to construct 16 more residential dwelling units on the basis of the added acreage from the home sites. Thus far, no Neighborhood Workshop — as required by county staff — has been scheduled on those plans. That workshop would be the next step before the firm files its formal application for the rezoning, Todd Dary, the county’s planning manager, told The Sarasota News Leader in early September 2020.

Coalition President Mark Spiegel, who lives on Calle Miramar on Siesta Key, has pointed out that the organization has more than 2,000 members, along with its alliances with the Siesta Key Association (SKA) and the Siesta Key Condominium Council. 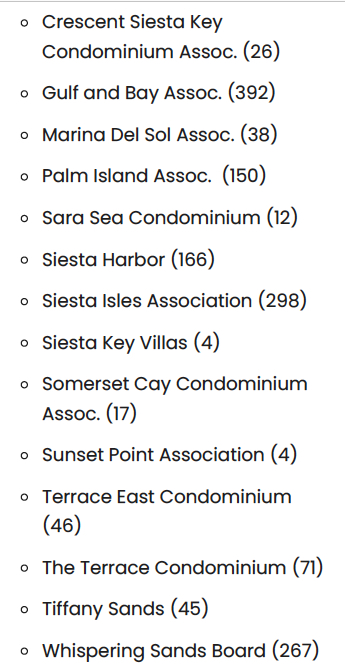 The focus of the worries

A second proposal was submitted to county staff late last year, on behalf of an ownership group based in New York City and a long-time lessee who is a RE/MAX real estate agent in Sarasota. It calls for a five-story hotel over three levels of parking on four parcels between Calle Miramar and Beach Road, on the edge of Siesta Village.

Finally, the owners of the Siesta Key Beach Resort and Suites, which stands at 5311 Ocean Blvd. in Siesta Village, submitted a preliminary application to county staff in late August 2020, seeking to demolish the 55 rooms and redevelop the property to encompass 170 rooms without full kitchens.

Siesta resident Michael Holderness is a principal owner of that hotel.

Along with the plans for their structures, the project teams behind the two new hotels propose amendments to county policies and recommendations in regard to the counting of hotel rooms for residential density purposes. In the preliminary application the Calle Miramar team submitted to county staff in May 2020, Icard Merrill attorney G. Matthew Brockway pointed out that the proposed Comprehensive Plan amendment would treat transient accommodations as a non-residential use. That, he noted, “is consistent with the true nature of the use. After all, from a land use, planning, and zoning perspective,” he wrote, “hotels are a commercial use critical to tourism and our local economy. To that end Transient Accommodations are only permitted (either as Permitted Uses or by Special Exception) in certain commercial zoning districts [Brockway’s emphasis].”

Kompothecras’ project team is calling for the doubling of residential density for hotel rooms allowed on property zoned for commercial purposes in what Kompothecras calls the “South Bridge Area” of the island, which is south of the Stickney Point Road/Midnight Pass Road intersection.

County regulations call for each transient accommodation — or hotel room — to count as half a dwelling unit if it has no kitchen. Zoning restrictions allow no more than 13 dwelling units per acre on a parcel zoned for commercial use. Thus, by right, 26 hotel rooms without kitchens would be permitted on 1 acre of a site zoned Commercial General, such as the Calle Miramar/Beach Road parcels and the Old Stickney Point Road property where the two high-rise hotels would stand.

When the News Leader asked the county’s Planning and Development Services Department staff about the potential of tackling all three hotel applications together, Michele Norton, manager of the county’s Planning and Zoning Division, replied in a Jan. 12 email: “Staff are aware of the nuances between all of the three proposed hotels with some being more site specific, and one that is more global in nature and will be scheduling hearings accordingly. At this time staff does not intend to consider these three petitions at a single hearing.”

A couple of years ago, a situation similar to the one involving the two sets of Siesta hotel Comprehensive Plan and Unified Development Code amendments arose in County Commission discussions. Members of the Miakka Community Club sought board approval for the processing of a Comprehensive Plan amendment that would limit residential density on a 6,000-acre area in the northwest quadrant of the intersection of Fruitville Road and Verna Road.

On Sept. 11, 2019, county Planner William Spaeth addressed the commissioners about the Miakka Community Club proposal, noting that the Planning Commission on Sept. 19, 2019 was scheduled to consider a different, privately initiated Comprehensive Plan amendment that would double the residential density on the same 6,000 acres.

Nonetheless, on a motion by Commissioner Nancy Detert, the County Commission agreed on a 3-2 vote to direct staff to proceed with work on the Miakka Community Club proposal. As a result, the agent for the group seeking the increase in density on the 6,000-acre tract ended up asking for a continuance of the Sept. 19, 2019 hearing.

Even in that situation, however, the county commissioners did not ask Planning and Development staff members to combine their work on the two distinctly different proposals.

On Jan. 26, the County Commission is expected to be asked to allow county Planning and Development Services staff to process the two Siesta-related, proposed transient accommodations changes outside the normal cycle for Comprehensive Plan and Unified Development Code (UDC) amendments.

The UDC contains all of the county’s land-development and zoning regulations.

Chapter 94 of the county’s Code of Ordinances says, “A Petitioner seeking to initiate a proposed amendment to the Comprehensive Plan shall submit a written request to the Director of the Planning Department for a pre-application meeting. A description of the proposed amendment and reason for the amendment shall be included in the request. Requests shall be submitted prior to April 1, except for amendments related to a proposed Development of Regional Impact or proposed Small Scale Development Activities, which may be requested at any time subject to the limitations set forth in [Florida Statute 163.3187(1)]. By letter to the Planning Director, any Petitioner may request that the [County Commission] allow any privately initiated Plan amendment to be submitted at any time. The Planning Director will report to the Board on any such request with a recommendation as to whether the request can be reasonably accommodated at the time requested or whether the amendment more appropriately should be processed as part of the annual cycle.”

In response to a News Leader question, county Media Relations Officer Drew Winchester wrote in a Jan. 19 email that staff expects those Jan. 26 items to appear on the Consent Agenda of routine business matters. “Of course, things are subject to change,” Winchester cautioned the News Leader.

Typically, the board members do not discuss Consent Agenda items unless one or more of them pulls an item to ask questions of staff or to voice concerns.

The News Leader also sought comments from Commission Chair Alan Maio and Commissioner Christian Ziegler about whether they would support asking the Planning and Development Services staff to work on the two transient accommodations issues in tandem. Maio and Ziegler are the two board members who represent Siesta Key.

In a Jan. 19 email, Deputy County Attorney Joshua Moye responded to the News Leader on behalf of Maio.

Moye wrote that Maio asked him “to provide the communication constraints on quasi-judicial hearings.”

Special Exception issues — such as those involving the Calle Miramar and south Siesta hotel proposals — are considered quasi-judicial.

Moye then explained, “In quasi-judicial hearings, all written and oral communication regarding the quasi-judicial matter pending before the Board and received by the Board outside the record of the hearing needs to be disclosed and made a part of the record before final action on the matter. This disclosure process overcomes the presumption of prejudice caused by the ex-parte communication. As set forth in Section 19(d)(2)(ii) of the Board’s Rules of Procedure, the County Attorney suggests that Commissioners refrain from participating in ex-parte communication whenever possible regarding a quasi-judicial matter to avoid the creation of the presumption of prejudice.”

In a Jan. 16 email response, Ziegler noted the same concerns that Moye had addressed. “With this being a quasi-judicial process,” Ziegler wrote, “I do not feel comfortable commenting on the specific proposal at this time …

“With that said,” Ziegler continued, “I do encourage residents to follow along and reach out if they have any input.”

Ziegler added in a separate Jan. 19 email, “I love getting input and having discussions with those I work for, but some of these rules tie our hands.”

In its Jan. 11 press release, the Siesta Key Coalition contended that the Planning Commission and the County Commission “have a legal obligation to evaluate all requests for Special Exceptions beyond the ‘by right’ zoning limitations based on whether they satisfy multiple standards specified in Chapter 124, Article 5, Section 124-43 of the [UDC].”

The Coalition added, “Any reasonable review of [the] projects will clearly show that they fail many of these required standards.”

Moreover, the organization pointed out in the release, the developers of the proposed new hotels “have no logical answer to how their collective 1,000+ transient guests would practically or safely get to the beaches.”

In recent months, Coalition members also have cited the fact that the county’s beach accesses on the Key essentially are public rights of way. The only public part of a Florida beach — as made clear in state law, they have added — is the area seaward of the Mean High Water Line.

However, the county does own Siesta Public Beach Park and Turtle Beach Park, so visitors and residents have no need to remain seaward of the Mean High Water Line in either of those facilities.

Last summer, the Gulf & Bay Club, which stands just south of Siesta Public Beach, became the latest island property to warn the public away from its area of the beach, landward of the Mean High Water Line.

During the Neighborhood Workshops county regulations required for the Calle Miramar and Old Stickney Point Road projects, speakers noted the potential for conflict, as condominium and other private property owners take more steps to keep the public off their parts of the shoreline. The owners of the new hotels would have to contend with that issue, as well, speakers emphasized.

1 thought on “Siesta Key Coalition calling for county staff to combine three island hotel proposals in one general review, instead of dealing with them piecemeal”