With the countdown underway for the first public hearing on one of four hotels proposed for Siesta Key, leaders of an organization established last year to fight the projects have expressed concerns about how Sarasota County staff has been handling the applications.

Additionally, the Siesta Key Coalition has renewed complaints its leaders aired earlier this year about the apparent deference of county Planning and Development Services staff members to the developers. The Coalition also points to what it calls a pattern of staff being unhelpful to members of the general public.

In a July 26 press release, the Coalition leaders contend that, as part of the review process for the four hotel applications, “County Planning staff comments have been inconsistent” and staff has allowed two of the proposals to proceed to the public hearing stage “with incomplete developer responses to staff …”

“The County’s pattern has been to dedicate resources to developer applications, but not to the communication and online public record updates to resident stakeholders, which has been delayed or inaccurate,” the release emphasizes.

As The Sarasota News Leader reported on July 16, the Planning and Development staff had failed to provide regular updates to what it calls the Active Petitions List, which is accessible through the county website. The intent of that document, as county staff has indicated in the past, is to provide details about the status of land-use applications under review, as well as Planning Commission and County Commission hearing dates, after those have been scheduled. On July 12, the News Leader learned from Planning and Development that the list had been unreliable for an indeterminate amount of time. Therefore, changes involving two of the hotel applications had not been noted; nor had a hearing date been added for the Calle Miramar project planned by RE/MAX real estate agent Robert Anderson Jr. and principal property owner Louise Khaghan of New York City.

Further, prior to staff’s recent addressing of the lag in updates to the Active Petitions list, the document did not point out that proposed county Comprehensive Plan amendments originally submitted by Calle Miramar hotel project team and the group working on Dr. Gary Kompothecras’ planned hotel and parking garage on south Siesta Key had been withdrawn from consideration by those teams.

The county Planning Commission is scheduled to conduct its public hearing on the Calle Miramar project at 5 p.m. on Thursday, Aug. 19, in the County Commission Chambers in the downtown Sarasota County Administration Center.

Frustrations over the streamlining of the permitting process

In the meantime, the County Commission has conducted two discussions with Matt Osterhoudt, director of Planning and Development, regarding the board members’ direction to streamline the permitting process.

The July 26 Coalition press release also references that initiative: “We have just learned that the County did take time to produce a 55-page report on how to make the permitting review process more efficient and effective, but despite requests going back a year ago from the Siesta Key Association, no resident stakeholders were consulted for their input, only county staff, developers, and developer consultants.” The latter part of the statement was put in bold type for more emphasis.

County documents the News Leader obtained this week through a public records request show that one of the members of Kompothecras’ team — Robert “Bo” Medred of Genesis Planning and Development in Bradenton — was invited to a “Developers Roundtable Focus Group on May 7.”

Additionally, William Merrill III of the Icard Merrill law firm in Sarasota was on the invitation list. Merrill is one of the Calle Miramar hotel project team members.

A county employee email that was sent to Osterhoudt of Planning and Development on May 6 reported that neither Medred nor Merrill had accepted the invitation. However, Medred’s son, Joe, who worked as a planner on the county staff before joining his father’s firm, would be present for the roundtable.

Among others on that event list were former state Sen. Pat Neal of Neal Communities and Todd Mathes, director of development for Benderson Development Co. An affiliate of the latter firm, Siesta 41 Associates, is officially in charge of the Siesta Promenade project slated for the northwest corner of U.S. 41 and Stickney Point Road. (See the related article in this issue.)

Another document the News Leader received through its public records request was an email chain involving Charles D. Bailey III of the Williams Parker law firm in Sarasota. Bailey is Kompothecras’ land-use attorney.

Those emails make it clear that a county employee representing Osterhoudt of Planning and Development was trying to determine whether Bailey could meet with Osterhoudt about the streamlining of the permitting process.

Finally, on May 4, the last email in the chain showed, Bailey’s assistant told the county employee that the timing of the proposed meeting would not work for Bailey that week. Nonetheless, Bailey’s assistant added, “This topic is very important to Charlie and our clients, so if there is an opportunity in the future for further discussion, please do let us know.”

A public airing of concern

During the Open to the Public period at the opening of the County Commission’s afternoon session on July 13, Robert Luckner, vice president of the Siesta Key Coalition and a director of the Siesta Key Association (SKA), voiced displeasure to the commissioners about staff’s failure to invite comments from residents’ groups as it worked to streamline permitting. Luckner referenced the attempt that SKA leaders made last year to discuss concerns with county Planning and Development staff.

“SKA was surprised, and pleased, that Matt and his staff have been working to improve the process for permit reviews,” Luckner began. “I guess what surprised us,” Luckner added, was that “for a couple of months, we’ve been sending letters and talking points to you about the problems we have with the policy of how permits are reviewed. … We just haven’t been able to get a meeting with you.”

“We were surprised when we read Matt’s report,” Luckner continued, “that, for the last two months, he and his staff have been working with [other county employees, but also] 30 developers.”

“How come you can talk to them, but you can’t talk to us?” Luckner asked the commissioners, emphasizing that the SKA leaders knew they would need to be careful to discuss only policy issues.

“It’s surprising,” he said once more.

No commissioner responded to the comment, which is the standard practice during the Open to the Public period.

In delving into the issue of the Comprehensive Plan amendments originally associated with the Calle Miramar and Kompothecras projects, the Coalition press release refers to another fact that the News Leader has reported: Kompothecras’ land-use attorney, Bailey, had corresponded with Todd G. Dary, manager of the county’s Planning Services Division, about the team’s reliance upon “a legal argument” that the amendment no longer was needed.

“This, even though the developer’s requirement to change the Comprehensive Plan policy has been understood as critically necessary by all parties for over a year, including the developers, the public, the County Planners, County Counsel, and the Board of Commissioners,” the Coalition press release pointed out.

That Future Land Use Policy, 2.9.1, pertains to the need to constrain residential density and intensity on the county’s barrier islands to promote public safety, especially in the face of major weather events, such as a looming hurricane, which would necessitate the evacuation of the islands.

The Coalition notes that, in late January, the County Commission granted petitions by three of the four hotel project teams, seeking county staff review of their proposed amendments to the Comprehensive Plan out of the standard county cycle for such action.

“Many of the recent Planning Staff comments [on the hotel applications asked the developers] to demonstrate consistency with our Comprehensive Plan policies,” the Coalition continues in the press release. “Yet, as we had to discover through public records requests, our County Planning Staff decided to go beyond their code and plan review purview” to allow the two project teams to withdraw those Future Land Use Policy 2.9.1 amendments. “Why is Planning staff opining on this now,” instead of the County Commission making that decision, the release asks.

“The effect of this, if it stands,” the release points out, “is to streamline the [developers’] process, avoid the requirement of a community-wide Workshop by the County, and circumvent the need for a super-majority vote threshold (4 out of 5) by the Commissioners.”

The latter part of that statement references the county requirement that a “supermajority” — four of five commissioners — must approve an amendment to the Comprehensive Plan, or the amendment cannot go into effect.

Finally, the Coalition explains in the release that its leaders “have been seeking clarification” from the Planning and Development Services staff, as well as Zoning Administrator Donna Thompson, about why the teams planning the Calle Miramar and Kompothecras hotel projects have not been told to adjust the setbacks of their buildings from neighboring residential property, as the county zoning regulations appear to require.

Both applications are seeking Special Exceptions from the County Commission to exceed the standard 35-foot height restriction in Commercial General zoning districts, the Coalition points out. The Kompothecras hotel would be about 83 feet tall, while the Calle Miramar structure would be approximately 80 feet high. According to the zoning regulations, the Coalition contends, both hotels should stand more than 30 feet away from adjacent residential buildings. Yet, the Coalition adds, Zoning Administrator Thompson “has informed the developers that now they only need 20 feet.”

The press release points out, with emphasis again, “We are still waiting for a formal answer that explains any logical way to interpret this issue other than the clear and obvious intent of that code to require developers to increase their setback when they ask through special exception for added height next to residential [areas]. We asked to meet with [Thompson] to get clarity and we were told we cannot [talk with her] due to quasi-judicial limitations.”

Public hearings on Special Exception petitions are considered “quasi-judicial” in that they resemble court cases. The County Commission, like a jury, is called upon to consider the evidence and testimony presented during a hearing and then judge whether the petition complies with all the applicable county policies and regulations.

County commissioners have stressed on numerous occasions that they legally cannot meet with any individuals or groups wishing to discuss the filings of petitions of a quasi-judicial nature, so as not to prejudice their views.

In response to a News Leader request for information about Thompson’s position, county Media Relations Officer Brianne Grant said on July 29 that the Planning and Development Services staff has reported receiving a multitude of questions and comments about the four hotel projects. Grant added that the staff is making an effort to be mindful of the quasi-judicial hearing policies, with the goal of ensuring that those are not violated.

Additionally, Grant continued, in an effort to make certain that the appropriate staff members address issues and concerns, Planning and Development is “kindly asking” that all communications about the applications be funneled through the Planner of the Day, at this email: planner@scgov.net. That also ensures that the entire Planning and Development team is aware of the communications, Grant added.

The Coalition press release concludes with a statement similar to those its leaders have made numerous times over the past year: “Our Coalition is not opposed to the re-development of properties or even the potential for true boutique hotels on Siesta Key. In fact, we strongly favor economic growth on the island, but not if it involves revising and circumventing existing protective policies, which will result in adverse consequences.” 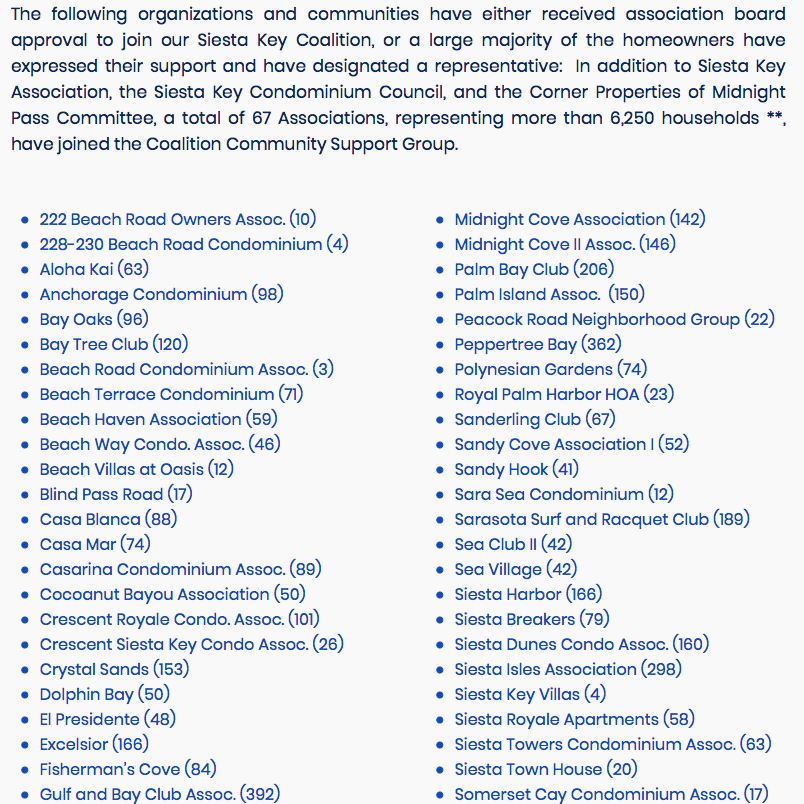 Then the release adds, with emphasis, “If material changes of this precedent-setting importance to thousands on the Key and Mainland are to be considered, the County leaders should respond to our repeated requests for proactive community engagement and cumulative impact studies,” instead of just “allocating staff resources to serve the developers’ processes.”