With Sarasota Vice Mayor Kyle Battie and Commissioner Liz Alpert stressing the loss of other major tourist attractions in the city, and Commissioner Hagen Brody emphasizing that the estimated expense is in keeping with that of similar facilities, the board members voted 3-2 this week to approve an agreement with the Van Wezel Foundation to pay for half of a new Sarasota Performing Arts Center (SPAC).

Mayor Erik Arroyo and Commissioner Jen Ahearn-Koch expressed numerous concerns about the document that the commissioners first discussed on March 21.

With projections that the SPAC could cost up to $350 million, Arroyo stressed repeatedly, “It’s a lot of money.”

“I appreciate where everyone’s at in terms of wanting to make this [new facility] a reality,” he added. “But we should be mindful of the worst-case scenario …”

“This is … probably the biggest [agreement], I think, we’ve ever entered into as a city,” Ahearn-Koch said. The financial aspect, she added, likely is three times higher than any other commitment a City Commission has made.

“The question here is do we want a new performing arts center at some point, or do we not?” Alpert told her colleagues. If the Foundation were not offering to cover half the cost, she continued, the city would have to pay for the project on its own.

She pointed out that the city lost the Sarasota Orchestra, which recently announced plans for a new venue on a 32-acre parcel located at 5701 Fruitville Road, between Honore Avenue and Cattlemen Road. Although a previous City Commission had tried to work with Orchestra leaders to keep the organization in the city, Alpert continued, “We kept delaying, delaying, delaying. Let’s not lose the SPAC.”

As for allegations by speakers that afternoon that the public had not been involved adequately in the discussions about the Sarasota Performing Arts Center, Alpert stressed, “Good grief! We’ve been talking about this since 2018.” Every presentation city commissioners saw about the plans for The Bay Park on the city’s 53 waterfront acres in downtown Sarasota included plans for a new performing arts venue, she pointed out.

“These are expensive projects,” Commissioner Brody said. “They just are.”

The Adrienne Arsht Center for the Performing Arts of Miami-Dade County cost $450 million when it was built in 2006, Brody added. (Using the U.S. Bureau of Labor Statistics Consumer Price Index inflation calculator, The Sarasota News Leaderestimated that that expense in February 2022 would have been approximately $644 million.)

“Communities find ways to pay for ’em,” he continued, usually through public-private partnerships like the one before the commissioners that day.

Ahearn-Koch asked City Attorney Robert Fournier whether approval of the agreement on April 4 would bind the commission to working with the Foundation, even if the city has difficulty raising its share of the money.

“Well, certainly there’s an obligation of good faith,” Fournier replied, “as there is in any agreement.” He reminded her that the Foundation group has committed to coming back to the commission in a year with a formal implementation agreement that will include the cost determined by an architect, based on the Foundation’s final decisions about the size of the new venue and other facets of construction.

In fact, as Fournier had pointed out at the outset of the April 4 discussion, he had removed language from the partnership agreement that included a cost estimate, as Commissioner Brody had directed in his March 21 motion.

The implementation agreement, Fournier continued, “should detail how [the SPAC estimate] was derived and spell out a schedule for contributions …”

Moreover, Fournier stressed, the document before the board on April 4 said that if the implementation agreement is not approved, no site plan for the new performing arts hall can be submitted to the city. 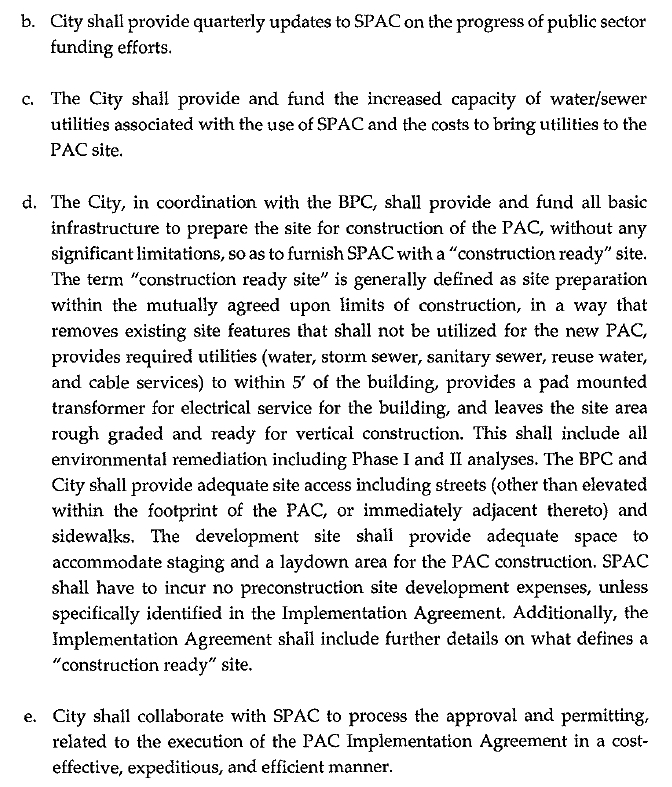 Fournier further noted that, on March 21, attorney Dan Bailey of the Williams Parker firm in Sarasota, who was part of the Van Wezel Foundation group, told the commissioners that they are “in control of the total project cost.” As he understood the statement, Fournier added, that means the commissioners could insist on a smaller project that they felt the city could afford.

On March 21, City Manager Marlon Brown pointed to the fact that city leaders already had committed to using $50 million out of the revenue from the tax-increment financing (TIF) district established for The Bay Park on the city’s waterfront to pay for its half of the SPAC. A revenue bond, paid back by a surcharge on every ticket sold to a performance at the new venue could be used to cover the rest of the city’s share of the expense, Brown added.

On April 4, Ahearn-Koch used the figure of $56 million as the projected TIF district revenue, collected over 30 years. (See the related article in this issue.) If, for example, the city’s share of the SPAC ended up being $150 million, she continued, that would leave $94 million to raise.

In response to Ahearn-Koch’s questions about a revenue bond, on April 4, city Finance Director Kelly Strickland explained that ticket sale revenue and fees for rentals of rooms in the SPAC could be used to pay off a revenue bond. (The venue will be city property.) However, Strickland said, “If we’re unable to make a debt payment … then we have to go to our non-ad valorem [tax revenue],” such as sales tax income.

(Property tax revenue makes up the largest portion of the city’s General Fund, which is typically a local government’s most flexible source of money for unanticipated expenditures, as well as city operations that do not generate income on their own. The largest portion of the General Fund money in recent years has been used to pay for operations of the Sarasota Police Department.)

The city also would be unable to raise its millage rate to cover any shortfalls in revenue for the SPAC, Strickland pointed out. “So we would have to cut the services in the General Fund.”

Working to refine the cost to achieve the goal

Cheryl Mendelson, CEO of the Van Wezel Foundation, said the project team is looking at ways to build a flexible facility “that can meet the needs for the next 50 years.” Refinements of the space requirements will continue, she added. The Foundation, too, wants to be able to afford the project, Mendelson pointed out.

Touring Broadway shows are the top interest for the public, as shown in the marketing study for the SPAC, she added. Those also are “the largest financial driver for the success of the performing arts center,” she said, and the city needs a 2,000-seat venue to be able to remain competitive in attracting Broadway shows in the region.

In response to a concern raised by a speaker that afternoon, Ahearn-Koch asked Mary Bensel, executive director of the Van Wezel Performing Arts Hall, whether the new Sarasota Orchestra venue would compete with the SPAC.

“We’ve known for a long time that the Orchestra was going to build their own building,” Bensel replied. An orchestra hall, she continued, “cannot do scenery-based Broadway shows. … It’s totally, totally, an opposite kind of hall.”

The initial hope, Bensel said, was that one facility in The Bay Park would serve the Orchestra and replace the Van Wezel Performing Arts Hall. “The Orchestra was the one that dropped out of that,” she added, because of concerns about sea level rise. “I was very much in favor of that [proposal for a combined venue],” Bensel said, because of the cost savings that design would have offered, such as a shared lobby and box office.

Among the 10 speakers who addressed the commissioners on the topic during the April 4 meeting, restaurateur Michael Klauber, who was representing the Bay Park Conservancy, stressed that the agreement was “just the first step” in the process of building the SPAC. “The centerpiece of The Bay Park master plan is the new [hall]. … Remember: We can’t finish the park until the new performing arts center is complete, so let’s get going.”

Ample time exists to deal with the financial aspects of the SPAC, Klauber pointed out.

Cathy Layton, chair of the Bay Park Conservancy Board of Directors, noted that approval of the agreement would clear the way for philanthropists to contribute to the expense of the SPAC.

However, city resident Cathy Antunes told the commissioners that, in a search of the Bay Park Conservancy website, she could not find any indication that that nonprofit has raised more than $7 million toward the overall expense of the park, which has been estimated up to $150 million.

(The 2021 annual report released by the Conservancy points readers to an Oct. 29, 2021 news release, in which the nonprofit says its receipt of $5 million in private philanthropy in the previous three months had triggered another $1-million match from The Patterson Foundation. The report adds that the latter funding support “takes the total raised from private philanthropic and community sources” to more than $30 million.)

As for the agreement with the Van Wezel Foundation: “This is a contract,” Antunes emphasized to the city commissioners. “There are commitments here.” For example, she continued, the city will be responsible for all of the maintenance. “You have no idea what those maintenance numbers will be.”

Antunes added, “This kind of ambiguity is only on the table when it comes to public money. None of us would sign a contract like this if it were our own business.”

Attorney Dan Lobeck told the commissioners, “This is a first step into quicksand. … The point of no return, Mr. Mayor, is right now, today, when you vote on this contract.”

The expense of the SPAC “could balloon easily to half-a-billion dollars,” Lobeck added, “mostly on the backs of the city taxpayers …” Accepting the agreement as written, he said, would leave the commissioners with “no good-faith negotiating leverage.”

City resident Sheldon Rich said he supported the concept of the SPAC, but he worried about the final price tag, as well.

Rich suggested that the agreement needed further work. For example, he noted, it mentioned that Tom Barwin still was the city manager, when Barwin announced in December 2020 that he would be retiring.

After the City Commission majority approved the agreement, the Van Wezel Foundation issued a press release in which CEO Mendelson said, “Together, the city and the Foundation envision the Sarasota Performing Arts Center as a preeminent destination for the performing arts in the nation by offering extraordinary cultural and educational experiences that open a world of new possibilities for all.”

It added, “The Foundation remains dedicated to continuing and deepening its educational mission serving more than 58,000 students, educators and families each year.”
Further, the press release noted, “The Foundation has assembled a team of global theater experts to bring the new performing arts center to life. The architectural selection process will commence, and ongoing community engagement will continue over the coming year. The Foundation will also begin transitioning its name to the Sarasota Performing Arts Center Foundation.

“Additionally, as a public-private investment, the Foundation will launch a philanthropic campaign, of which the board has already committed the first $20 million. Public funding sources, including state and federal appropriations, will also be identified in collaboration with city management,” the release said.