Funding designed to support programming that will draw tourists

The Sarasota County Commission has awarded $1,675,700 in grants to 34 arts and cultural organizations for programming for the 2022 fiscal year.

The goal with the funding support, Jim Shirley, executive director of the Arts and Cultural Alliance of Sarasota County, told the board members on Aug. 24, is to draw tourists to the community.

The 2017 report Arts and Economic Prosperity, produced by the nonprofit Americans for the Arts, said the average out-of-county attendance at arts events in the United States was 34.1%, Shirley noted.

The visitor attendance level projected for the recipients of the county grants for FY 2022 is 61.7%, he added. The new fiscal year will begin on Oct. 1.

The national report is updated every five years, Shirley explained. In October, he continued, he and his staff will be “leading all of our organizations in data collection, which includes surveys of people at the events, budgets — all of those things” for the next five-year update. “Then we’ll be reporting on that information at the beginning of [Fiscal Year] 2023.”

About 540 communities throughout the nation are the focus of the study, Shirley added. The findings published in the Americans for the Arts report is used by Congress, he said, to measure the impact of the arts on the U.S. economy.

“Prior to COVID,” Shirley said, “the vast majority of all of our organizations … were pretty well maxed out. They were selling out everything there was to sell out.”

Since the pandemic began, he continued, very few arts and cultural events have taken place in the county, “just because of the safety issues.”

However, Shirley pointed out, “Arts organizations have full years planned [for the 2022 fiscal year], budgeted and ready to go to the extent that they will be able to do that.” By October, he added, he hopes “we’ll all feel much more comfortable” attending performances and visiting exhibits. “That includes the tourists and the people who live here full-time.”

“I think all the groups were as creative as they could be during COVID,” Commissioner Nancy Detert responded, noting, for example, that a number of outdoor performances were conducted, as U.S. Centers for Disease Control and Prevention (CDC) guidelines have said consistently that transmission of the virus does not take place as readily in outdoor settings.

“I spent a lot of time with all the [county] organizations and their leaders” after the pandemic began, talking about how to keep audiences engaged, he told the commissioners. “I’ve seen some amazingly creative work being done … I think they’ve pulled out all the stops.”

As for the county grants program: Shirley explained that the recipients of the funds “have to demonstrate … the number of tourists that they’ve been able to attract.” He added, “We set the standards, we put the measurements out there,” and county staff documents the data.

Moreover, Shirley noted, the panelists who decide on the grant recommendations all have backgrounds that enable them “to effectively evaluate artistic shows and performances … It’s a very rigid process.”

Applicants appear before the panelists on three occasions, he said, and the panelists can ask follow-up questions after those sessions.

Then the panelists score each application, Shirley added. “It’s worked very well for us over time.”

An Aug. 24 county staff memo explained, “The funding calculation process divides organizations into four categories based on their annual operating expenses as reported in their annual financial statements for their most recently completed fiscal year. Funding caps are applied to each of the categories. A specific funding formula is then applied to the capped amount to arrive at an Unadjusted Grant Amount. … The Unadjusted Grant Amount … then [is] adjusted proportionately based upon the … funds available for the grant year.”

The original requests from the organizations for the 2022 fiscal year added up to $2,157,587, Shirley said. Following the panelists’ scoring process, he pointed out, that was pared to $2,092,812. Then, because the county had less money to offer because of the decline in the “bed tax” revenue last year, as a result of the pandemic, the total amount available for the grants was $1,675,700.

A portion of the county’s revenue derived annually from the Tourist Development Tax is set aside for the grants. The 5% tax is charged for rentals of accommodations for six months or less time.

The scores this year for applicants ranged from 88% to 100%, Shirley noted. Any applicant with a score lower than 80% is eliminated from consideration, he said.

Years ago, leaders of South County organizations complained to commissioners that they were not receiving equal treatment in applying for the grants. At County Commission direction, Shirley and his staff began putting more emphasis on outreach to those groups.

“Attracting tourists is important,” Commissioner Detert told Shirley, “but [the arts programming] also benefits the local community in the manner of feeding your soul.” 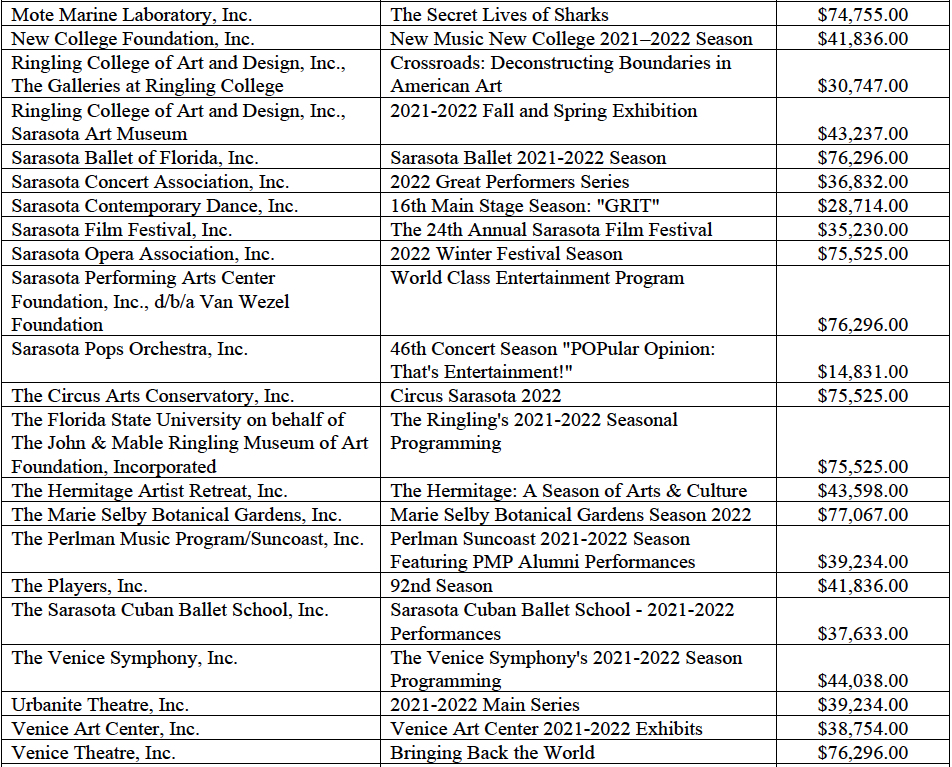